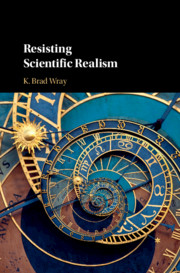 In this book K. Brad Wray provides a comprehensive survey of the arguments against scientific realism. In addition to presenting logical considerations that undermine the realists' inferences to the likely truth or approximate truth of our theories, he provides a thorough assessment of the evidence from the history of science. He also examines grounds for a defence of anti-realism, including an anti-realist explanation for the success of our current theories, an account of why false theories can be empirically successful, and an explanation for why we should expect radical changes of theory in the future. His arguments are supported and illustrated by cases from the history of science, including a sustained study of the Copernican Revolution, and a study of the revolution in early twentieth century chemistry, when chemists came to classify elements by their atomic number rather than by their atomic weight.

'With its insightful and engaging critique Resisting Scientific Realism takes on every argument that scientific realists have offered, but does much more than that. What emerges along the way is a strengthened anti-realism skillfully aligned with epistemic modesty about the continuing historical development of the sciences. It will be a delightful and rewarding read for realists and anti-realists alike.'

‘Resisting Scientific Realism is a wonderfully rich, impressively clear, and meticulously argued, thought-provoking book … it is required reading for anyone interested in the contemporary development of the scientific realism debate in the philosophy of science literature.’

‘Resisting Scientific Realism exhibits excellent scholarship and philosophical creativity. It is a valuable contribution to the literature on scientific anti-realism, containing important arguments with which realists must contend, and directing the scientific realism debate towards exciting new (or unfairly neglected) topics. The writing is admirably clear and elegant. If you are interested in scientific anti-realism or scientific theory change, you should read this book.’

Source: British Journal for the Philosophy of Science

'It is essential reading for those interested in the classic arguments in the realism debate.'

‘… it offers various intertwined strands of argument with the aim of persuading the reader that realism faces significant challenges, and hence, anti-realism cannot be so easily dismissed as is typically thought.’

‘Wray’s book Resisting Scientific Realism is a welcome addition to the philosophy of science literature. It joins just a handful of book-length discussions of the realism debate in the past 20 years. I expect that anybody interested in the realism debate, or the relationship between science and truth more generally, would profit from reading it.’

‘Brad Wray’s Resisting Scientific Realism is precisely what the title suggests: an attempt to resist scientific realism, and in particular an attempt to resist the realist ways to reconcile the two foregoing facts … I should add without any hesitation that Brad Wray has written an admirable book, full of insightful argument and constructive criticism.’

‘K. Brad Wray’s Resisting Scientific Realism offers a spirited and engaging attack on scientific realism that includes new historical examples, useful engagement with familiar examples and arguments, and some novel arguments of its own. It aspires both to present a comprehensive survey of the arguments against scientific realism and to challenge the influential realist argument that the approximate truth of our best scientific theories offers the best or only explanation for the success of those theories.’