Home
Return of the Barbarians

Return of the Barbarians

Confronting Non-State Actors from Ancient Rome to the Present 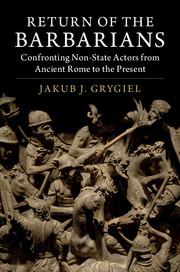 Barbarians are back. These small, highly mobile, and stateless groups are no longer confined to the pages of history; they are a contemporary reality in groups such as the Taliban, Al-Qaeda, and ISIL. Return of the Barbarians re-examines the threat of violent non-state actors throughout history, revealing key lessons that are applicable today. From the Roman Empire and its barbarian challenge on the Danube and Rhine, Russia and the steppes to the nineteenth-century Comanches, Jakub J. Grygiel shows how these groups have presented peculiar, long-term problems that could rarely be solved with a finite war or clearly demarcated diplomacy. To succeed and survive, states were often forced to alter their own internal structure, giving greater power and responsibility to the communities most directly affected by the barbarian menace. Understanding the barbarian challenge, and strategies employed to confront it, offers new insights into the contemporary security threats facing the Western world.

'Jakub J. Grygiel's Return of the Barbarians combines a bold, original thesis with supreme erudition. This is political science merged with classical studies in the service of making the reader see the world differently and more profoundly. Even the footnotes are fascinating. A perfect historical guide to the current era.'

Robert D. Kaplan - author of The Return of Marco Polo's World: War, Strategy, and American Interests in the Twenty-First Century

'Do modern strategists have anything to gain from a close study of the strategic challenges faced by premodern societies? Jakub J. Grygiel thinks so, and he has a powerful case to make. As he demonstrates in detail, premodern societies often had to cope with a strategic threat posed by non-state actors - such as pirates, brigands, and barbarians situated on their frontiers or in the mountains, deserts, and swamplands they left ungoverned - that is quite similar to the threat that the pirates, brigands, and barbarians active today now pose to us.'

Paul Rahe - author of The Spartan Regime: Its Character, Origins, and Grand Strategy

'Throughout history, small decentralized bands of fierce mobile warriors have emerged from ungoverned spaces to threaten the security, and at times even the survival, of more settled and seemingly stronger communities. In his provocative new book, Jakub J. Grygiel argues that, with the rise of global terrorism, the ‘barbarians are back'. To defeat them, today’s policymakers must study and learn from the past. This is a brilliant and highly original use of premodern history to illuminate contemporary strategic challenges.'

Aaron Friedberg - author of A Contest for Supremacy: China, America and the Struggle for Mastery in Asia

'A fascinating, briskly written excursion into the ways we conceptualize premodern history and modern times - and how our current and future strategic landscape may resemble the former more than the latter. The future premodern world - one characterized by the rise of violent non-state actors in pursuit of non-territorial objectives, the proliferation of lethal technologies that allow barbarian groups to punch above their weight, and the opening of ungoverned spaces that allow them to prosper - is a strategic landscape in which deterrence and diplomacy lose some of their effectiveness and, accordingly, international relations become more violent. In this highly perceptive and entertaining book, Grygiel compellingly argues that the new barbarian menace will likely force states to decentralize power, activating their populations to provide for their own security.'

Randall Schweller - author of Maxwell's Demon and the Golden Apple: Global Discord in the New Millennium

‘Grygiel offers a fascinating, thoughtful, and incisive analysis - and one backed up with remarkable erudition.’

'Policymakers and scholars of international relations will undoubtedly find Return of the Barbarians by Jakub Grygiel, to be a rich resource of information on the premodern global order. Throughout the text, Grygiel cogently and forcefully argues for researchers and practitioners to return to premodern history to understand contemporary threats and strategic challenges that the United States currently and increasingly faces.'