Home
Taming the Past

Essays on Law in History and History in Law 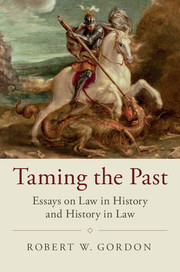 Lawyers and judges often make arguments based on history - on the authority of precedent and original constitutional understandings. They argue both to preserve the inspirational, heroic past and to discard its darker pieces - such as feudalism and slavery, the tyranny of princes and priests, and the subordination of women. In doing so, lawyers tame the unruly, ugly, embarrassing elements of the past, smoothing them into reassuring tales of progress. In a series of essays and lectures written over forty years, Robert W. Gordon describes and analyses how lawyers approach the past and the strategies they use to recruit history for present use while erasing or keeping at bay its threatening or inconvenient aspects. Together, the corpus of work featured in Taming the Past offers an analysis of American law and society and its leading historians since 1900.

‘Robert W. Gordon has been one of the preeminent commentators on the rapid rise of American Legal History as a discipline. Each of these essays, written over the past forty years, constitutes an important example of his unequalled influence over the dramatic development of the field.’

‘The sparkling essays of one of the preeminent legal historians of our era are now collected in one place, where they can talk with each other. Here we see the vintage apercus that make us laugh aloud at Gordon’s wit and nod our head at his wisdom. So, for example, we see Gordon discussing ‘Willard Hurst’s benign, if also rather insistent, influence;’ talking about how ‘dead paradigms … never really get killed off [in law], but hang around and Dracula-like, rise from their coffins to stalk the earth;’ observing that E. P. Thompson ‘almost never (save when exposing an opponent as an ignorant twit) showed off how hard he had been working;’ and pointing out that ‘history does not make a good domestic pet.’ This book is a real treat!’

‘Once an arcane backwater, mostly located in the backrooms of law schools, disconnected from the main themes of academic legal study, legal history has become a site of core controversies, ones that everyone involved with the study of law had to engage with. Legal history is where scholars from emerging fields of ‘non-legal’ history - including historical studies of gender, of race, and of market capitalism - found the scholarly perspectives that made possible exciting new work about law. The writings of Robert W. Gordon helped guide how it all happened. American scholarship owes him a debt of gratitude. And it is good that a new generation will be introduced to his analytic clarity, to his wisdom, and to his attractive voice, through this accessible edition.’

‘For four decades, Robert W. Gordon has provoked, inspired, and nourished the writing of critical legal histories. I can still recall the exhilaration of reading him as a student. This indispensable volume collects classics and little-known essays that will engage first-time and returning readers with unsettling questions about the ways we understand law’s history and authority.’

'In this collection of his writings over a forty-year career, Gordon argues that lawyers and judges often make arguments based on history - on the authority of precedent and original constitutional understandings - both to preserve the inspirational, heroic past and to discard its darker pieces.'