Home
With Ballots and Bullets

With Ballots and Bullets

Partisanship and Violence in the American Civil War 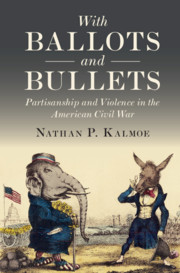 What happens when partisanship is pushed to its extreme? In With Ballots and Bullets, Nathan P. Kalmoe combines historical and political science approaches to provide new insight into the American Civil War and deepen contemporary understandings of mass partisanship. The book reveals the fundamental role of partisanship in shaping the dynamics and legacies of the Civil War, drawing on an original analysis of newspapers and geo-coded data on voting returns and soldier enlistments, as well as retrospective surveys. Kalmoe shows that partisan identities motivated mass violence by ordinary citizens, not extremists, when activated by leaders and legitimated by the state. Similar processes also enabled partisans to rationalize staggering war casualties into predetermined vote choices, shaping durable political habits and memory after the war's end. Findings explain much about nineteenth century American politics, but the book also yields lessons for today, revealing the latent capacity of political leaders to mobilize violence.

''Vote as you shot,' Republican politicos urged Union soldiers and veterans during and after the Civil War. And they did, as Nathan Kalmoe demonstrates with new data and innovative methodology in this important book. Republicans mobilized ballots as well as bullets against Northern as well as Southern Democrats in a war characterized by violent partisan conflict on both the home front and battle front.'

'This is an extraordinarily timely book for both contemporary American politics and the study of political science. Kalmoe’s framing of the Civil War as a fundamentally partisan conflict draws our attention - rightfully- to the span of forms that partisan conflict takes, from contesting free and fair elections in which citizens are offered clear choices for representation, to the refusal to recognize legitimate democratic outcomes and the turn to violent resistance. Kalmoe masterfully integrates party theory, history, and a truly impressive range of historical data. The result is an important advance in our understanding of American partisanship both historically and in modern times.'

'On September 29, 2019, Donald Trump, quoting a Southern Baptist preacher, warned that his impeachment and removal from office would cause a ‘Civil War like fracture in this Nation from which our Country will never heal.’ Nathan Kalmoe asks us to explore what, in fact, partisan civil war actually looks like when soldiers fight the way they vote. As his meticulous analysis of data drawn from the American Civil War demonstrates, party organizations can generate strong partisan identities that can lead men - millions of men - to kill one another.'

'With Ballots and Bullets is an impressive and vitally important piece of scholarship. Kalmoe offers an array of compelling evidence to show that party elites in the North and South used people’s attachments to the political parties to whip up support for the Civil War and this had far ranging consequences - from influencing how people voted to how they fought. Kalmoe demonstrates that modern day theories of partisanship help explain the behavior of American voters 160 years ago.'

'With Ballots and Bullets is an important book which advances a provocative and timely thesis. Kalmoe reexamines support for the Civil War in the north and argues that the conflict was fueled by partisan animosity. From his perspective, the war was fought in part over the issue of slavery but its flames were fanned by northern partisan leaders. Kalmoe makes his case through painstaking analysis of partisan newspaper content, voluntary enlistment, desertion, and death rates, and state and county vote records. The book challenges conventional wisdom on a number of different fronts and deserves to be read and discussed widely. By focusing on the partisan nature of the civil war, the book provides a disturbing parallel to present times.'

‘… With Ballots and Bullets is an excellent piece of scholarship that provides a template for the fusion of history and social science. Kalmoe builds on qualitative and historical accounts of the roles political parties played in the US Civil War with novel quantitative analysis and useful theory pulled from political science literature.’