Satellite imagery analysis has revealed the presence of at least 330 stone structures—akin to ‘desert kites’ recorded elsewhere—on and around the Hamada al Hamra Plateau in Libya. These structures, which probably vary in shape based on local geomorphology, may have been used for hunting or herding animals.

The discovery of numerous stone structures in Northern Africa—possibly intended to catch wild animals or to gather semi-domestic or domestic species—is providing new information concerning ancient subsistence strategies. Research using satellite imagery of stone structures on the Hamada al Hamra Plateau in Libya and neighbouring areas (Figure 1) has thus far identified 330 such structures. These are characterised by architectural analogy with the so-called ‘desert kites’ observed mainly in the Middle East and South-west Asia. The Libyan structures, although lacking a polygonal enclosure with cells, stand out in their significant variety of shapes, which is probably related to the morphology of the territory and the species of fauna that they were intended to detain. 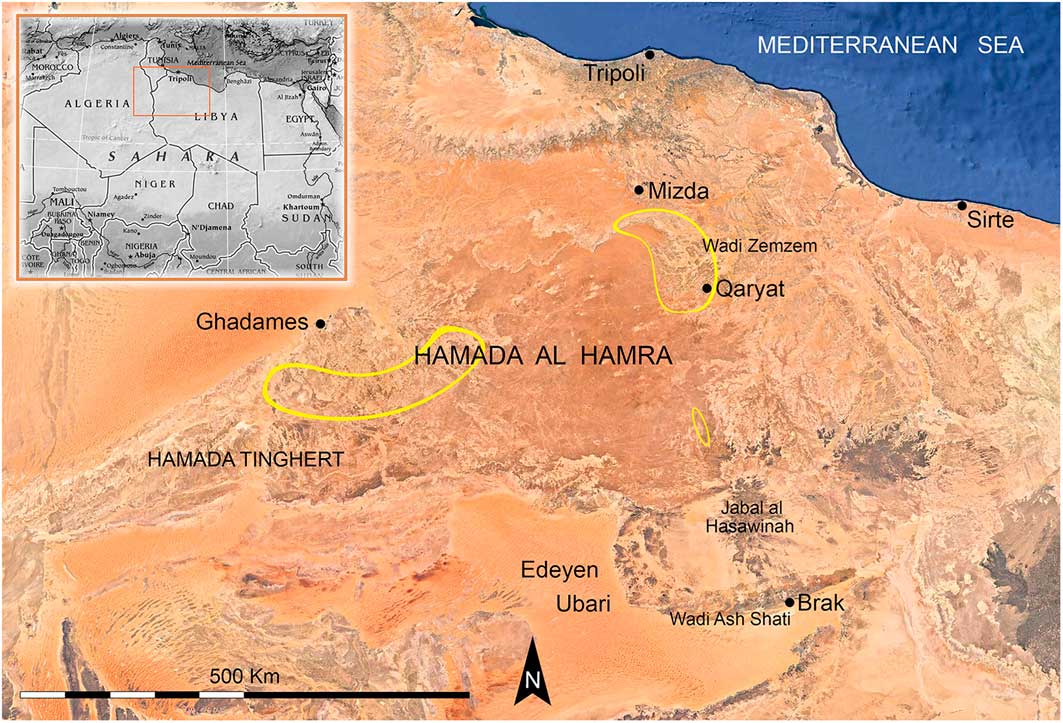 The structures are mainly concentrated on the western (about 60 per cent) and north-eastern (about 30 per cent) borders of the plateau, in areas once frequented by prey animals. Examples at the western edge of the Hamada consist of a pair of converging V-shaped walls, where the natural limit of the escarpment forms an integral part of the trap (Figure 2). These types of desert kites have similarities with the ‘headland kites’ on the Ustyurt Plateau of Kazakhstan (Betts & Yagodin Reference Betts and Yagodin2000; Barge et al. Reference Barge, Brochier, Deom, Sala, Karakhanyan, Aavagyan and Plakhov2016). We also note a frequency of structures with a ‘V’ shape that seem either to have blocked or circumscribed an area to facilitate the movement, control or capture of prey animals. The geomorphological diversity of the eastern Hamada slope seems to be reflected in the architectural variety of desert kites—the geometry and extent of their antennae is particularly characteristic (Figure 3). 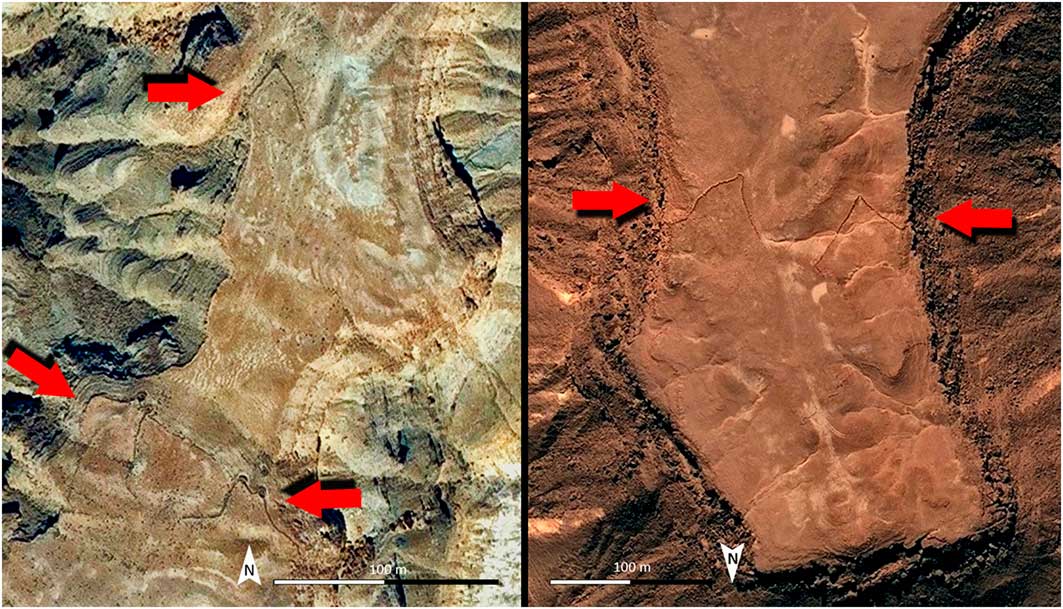 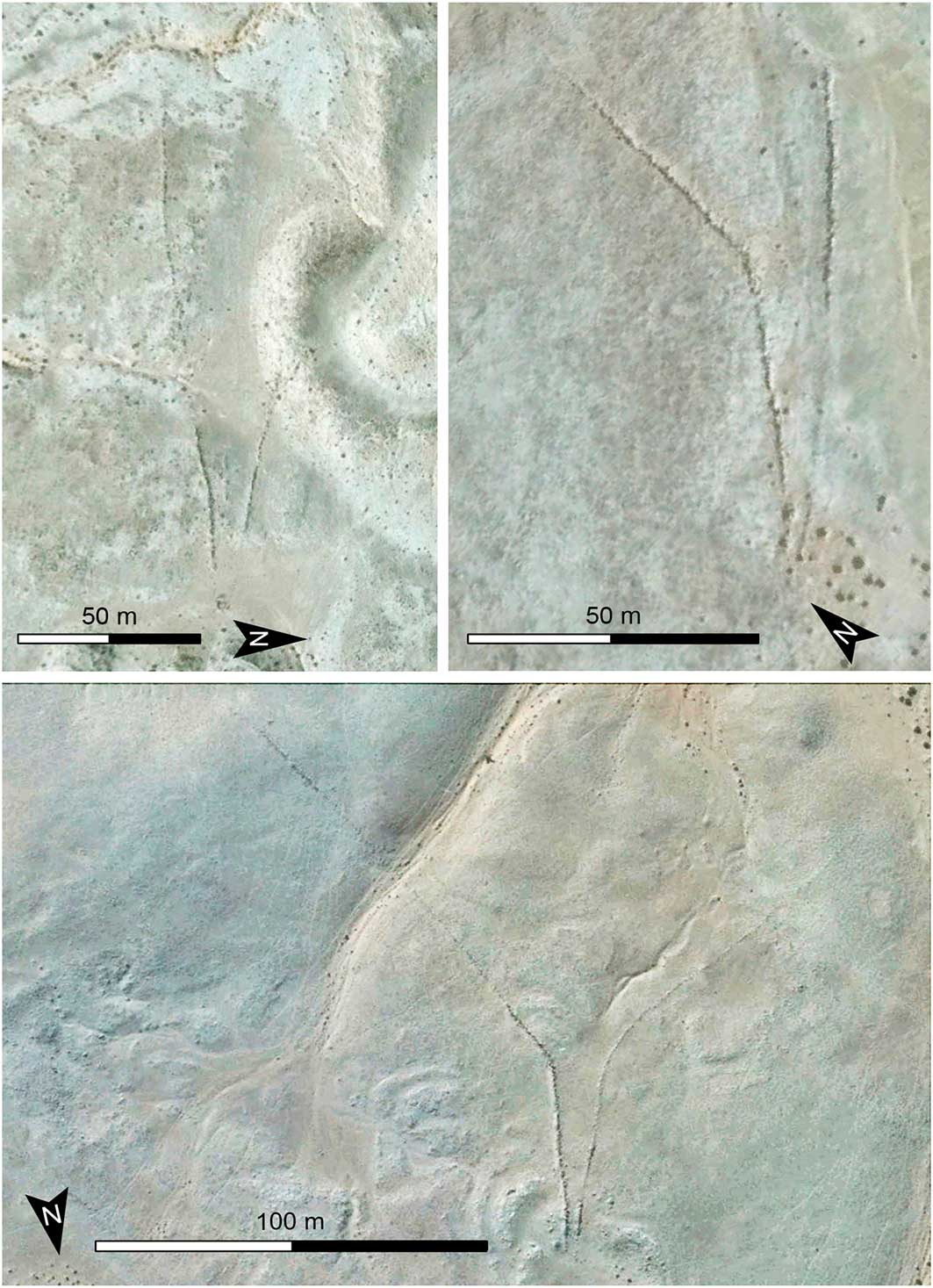 Capture systems known as ‘chutes’ are prevalent, with architectural similarities to those identified in the Negev and Sinai Deserts (Holzer et al. Reference Holzer, Avner, Porat and Kolska-Horwitz2010; Bar-Oz et al. Reference Bar-Oz, Nadel, Avner and Malkinson2011; Nadel et al. 2010, Reference Nadel, Bar-Oz, Avner, Malkinson and Boaretto2013). The walls converge to the edge of a slope or a step, with the intention of forcing prey into a natural pit or an artificial stone enclosure (Figure 4: top & centre). One of these complexes—built on a long and narrow tabular promontory—is accompanied by two approximately circular pits 5m in diameter (Figure 4: bottom). Another system has a pit on slightly sloping ground, which was probably invisible to the approaching prey (Figure 5: top). A further example was built at the edge of a wadi (Figure 5: bottom), presumably to capture animals that gathered near the river—as at the Jordanian site of Saudi Harrat Ash Shaam (Betts & Burke Reference Betts and Burke2015). Forty-four structures have been identified to the south-east, 23 of which are distributed for approximately 30km in a north–south direction. They appear as subtle, long, dark lines, probably made of local volcanic stone. They are lacking an apex enclosure as seen in the Yemen kites located between the Ma’rib and Sirwâ regions (Brunner Reference Brunner2008; Skorupka Reference Skorupka2010). The antennae range in length from 120–800m, while the space between the two arms at the end of the convergence fluctuates between 15 and 20m (Figure 6). The lack of a fence could cast doubt over the use of these structures for hunting. One could therefore cautiously hypothesise that at the apex of the stone lines’ convergence there were complementary systems consisting of nets or shrubs to capture animals—as documented in rock art and ethnographically in other areas of Africa (Le Quellec & Civrac Reference Le Quellec and Civrac2010). 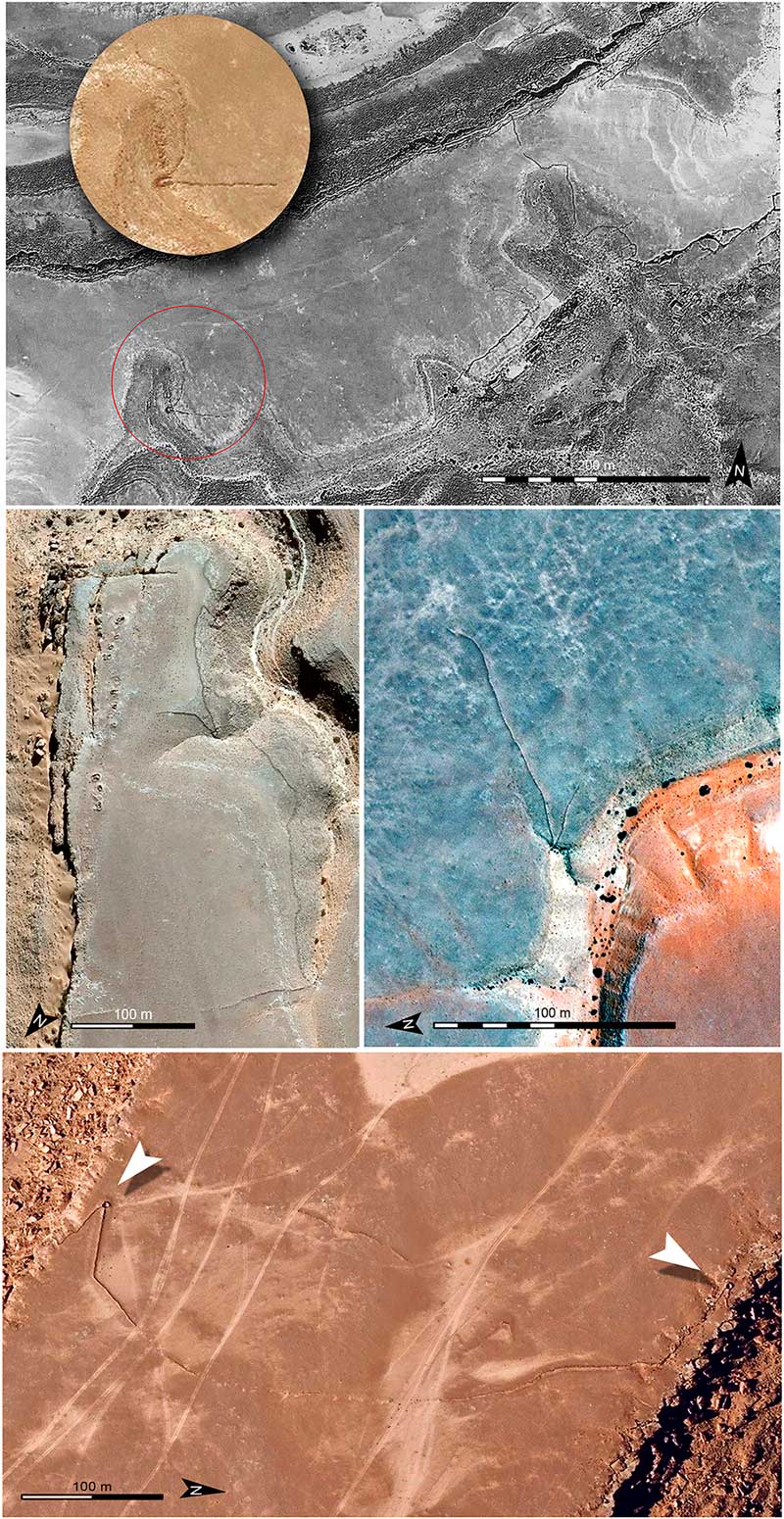 Figure 4 Three chute structures; top) structure with artificial embankment at the slope base, at the convergence of the antennae; centre left/right) the same embankment is not visible in these two sites; bottom) system with two circular pits at the edge of the promontory (white arrows) (images © Google Earth). 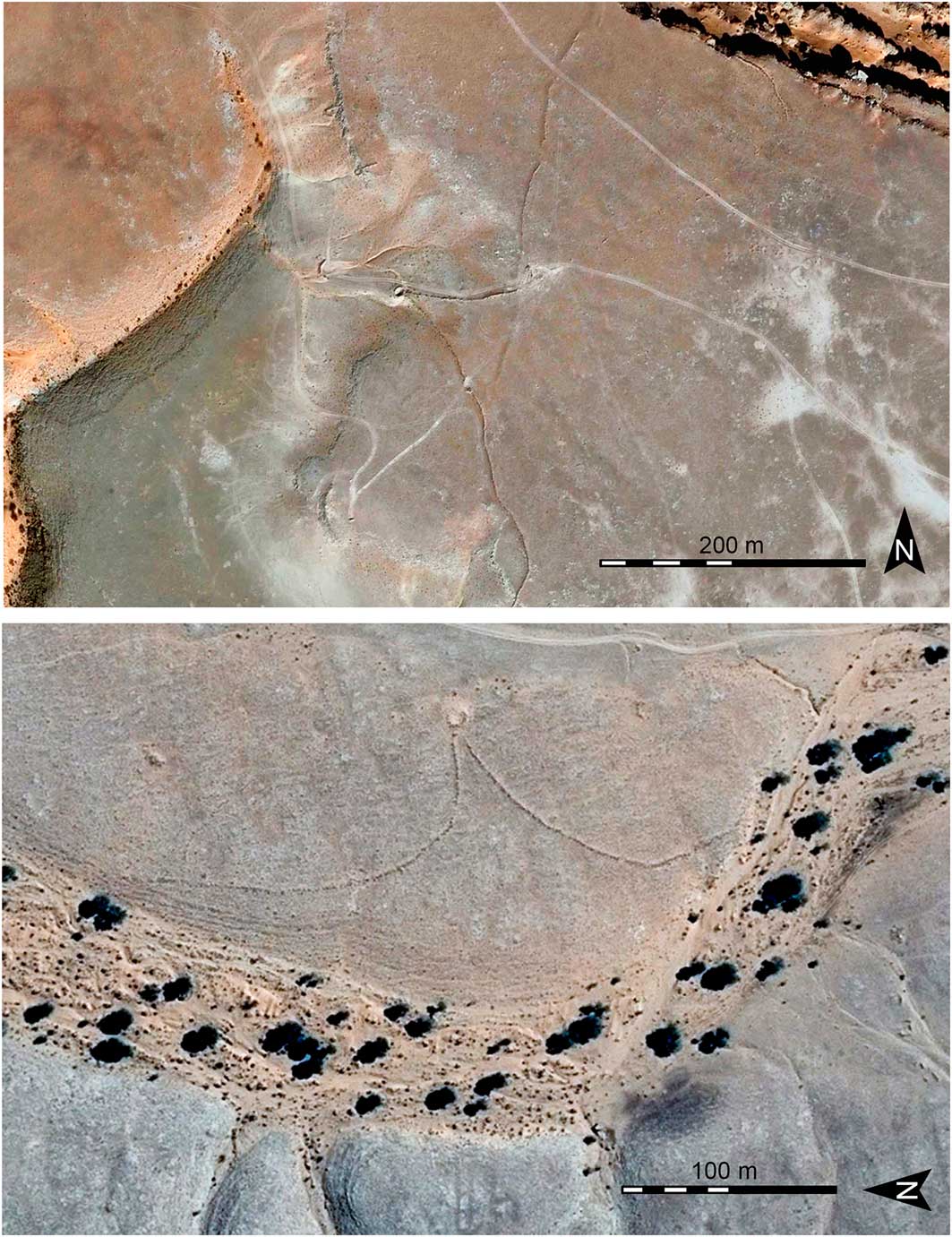 Figure 5 Top) long antennae of the kite to drive prey into a large pit on a slope. The remains of a small circular structure of unknown function are visible to the north; bottom) the antennae connecting the wadi shore to the circular pit are in a raised position (images © Google Earth). 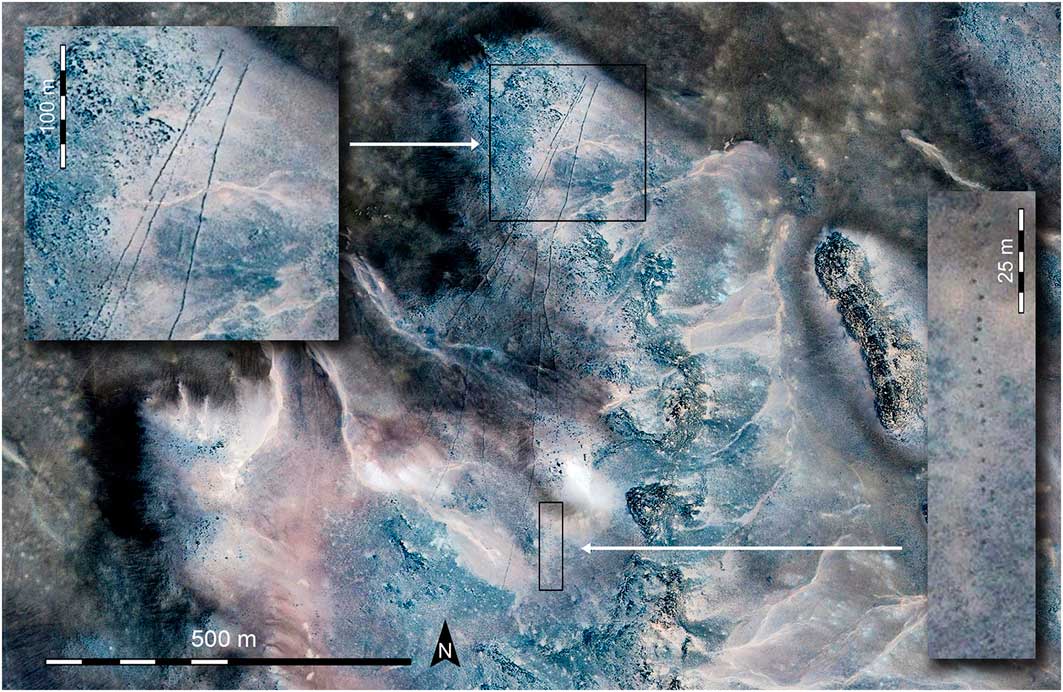 Figure 6 The long channelling antennae are clearly visible on the basalt floor. The enlarged frame shows a section of the wall formed by a non-continuous alignment of stones (images © Google Earth).

The typology of these Libyan systems raises intriguing questions about their origin and diffusion, about the communities that used them and the variety of prey hunted. Studies should also consider the so-called ‘game traps’ reported in Egypt in Lower Nubia, the Great Sand Sea, Jebel Uweinat and Gilf Kebir, to understand the technical evolution of Northern African hunting systems. The distribution of kites on the Hamada al Hamra Plateau suggests regionalisation of the different structure types, probably attributable to geomorphological factors, the species and quantity of animals being captured and the attitudes and periodic movements of those animals. Finally, the choice of construction sites demonstrates a profound knowledge of the region, both at a large scale and at the local level. Consequently, the structures, which involved planning, organisation and realisation phases, became a marker for territorial ownership. Based on the results of this investigation phase, we are now analysing other regions of Libya. The initial findings are relevant and unexpected, and will be published in the near future.