From antiquarianism to proto-archaeology: Philipp von Stosch (1691–1757) and the study of engraved gems 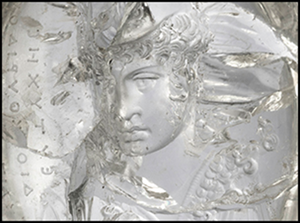 Examination of Philipp von Stosch's documentation of engraved gems, discovered in previously unknown archival sources in the Princes Czartoryski Museum in Krakow and other public and private collections, considerably advances our understanding of the move from antiquarianism to proto-archaeology in the eighteenth century.

Philipp von Stosch (1691–1757) (Figure 1) is regarded as one of the most instrumental figures in eighteenth-century antiquarianism (Hansson Reference Hansson2014). While previous research has focused on his life and role as a collector (Lewis Reference Lewis1967; Zazoff & Zazoff Reference Zazoff and Zazoff1983: 3–67), the production of his outstanding book on gems (signed by ancient masters and published in 1724 (Heringa Reference Heringa1976; Zazoff & Zazoff Reference Zazoff and Zazoff1983: 24–50; Whiteley Reference Whiteley, Henig and Plantzos1999)) and his collection of engraved gems published by Winckelmann in 1760 (Borbein et al. Reference Borbein, Kunze and Rügler2019), his other contributions to academia have been overlooked. This article considers his skill in building and managing collections and, perhaps most importantly, his collaboration with numerous artists who produced drawings apparently intended as illustrations for his virtually unrecognised scholarly projects.

An extensive collection of unpublished drawings of engraved gems discovered in the Princes Czartoryski Museum in Krakow provided an opportunity to explore Stosch's scholarly activities. The drawings record small objects made of precious stones used in antiquity as seals, amulets or as personal adornments. This collection, together with pictorial and archival materials from other public institutions and privately owned collections around the world, provides a unique chance to reconstruct Stosch's ambitious enterprises. The Stosch project, which examined around 3200 annotated drawings of gems to understand the contribution of Philipp von Stosch to scholarly knowledge, represents a collaboration between Paweł Gołyźniak from the Jagiellonian University in Krakow, Hadrien J. Rambach from Lille University/University of Tübingen and Ulf R. Hansson from the Swedish Institute of Classical Studies in Rome. A multidisciplinary approach was adopted, with archaeological studies combined with art historical and historical research, as well as optical and physicochemical analyses of drawings and archives. During the two-stage project, the author documented and thoroughly analysed the drawings from the Princes Czartoryski Museum, attributed them to specific artists, identified the original gems that the drawings recorded and evaluated their contribution to studies of ancient glyptic art and the history of collecting. This documentation was followed by work to contextualise the collections within their eighteenth-century setting and within a framework of Stosch's scholarly activities traced through archives and correspondence.

In 1724 Stosch published Gemmae antiquae caelatae (Stosch Reference von Stosch1724), a study regarded as a pioneering work not only in the discipline of glyptics, but also by archaeologists and art historians (Furtwängler Reference Furtwängler1900: 409–10 & 415–17; Zwierlein-Diehl Reference Zwierlein-Diehl2007: 274–75). There is much confusion, however, surrounding the production process of this volume, and the quality and accuracy of its final illustrations. Stosch was critiqued for the imperfect plates illustrating the gems, which appeared in his book. In fact, Stosch had originally employed artist and antiquarian Hieronymus Odam (1681–1741), and a few others like him, who documented gems accurately in terms of their appearance and iconography, rather than artistically (Figures 2–3), but these were replaced later by publisher Bernard Picart (1673–1733), who substituted his own illustrations, frustrating Stosch's attempts to reproduce the artefacts discussed in the book faithfully (Figures 4–5).

The project's most significant finding was that the recently discovered drawings and archival materials confirm that Stosch continued his vision to record artefacts accurately and had plans to release a supplement to Gemmae antiquae caelatae. Stosch stood apart from other collectors in that he produced a catalogue of his own gem cabinet; the manuscript unfortunately does not survive (Hansson Reference Hansson2014: 27), but its existence is known from Stosch's correspondence and his biography published in Das neuen Gelehrten Europa (1754). Strodtmann (Reference Strodtmann1754: 50) and Winckelmann (Reference Winckelmann1760: XXVII) both suggested that Stosch employed artists such as Pier Leone Ghezzi (1674–1755), Hieronymus Odam, Johann Justin Preissler (1698–1771), Carl Marcus Tuscher (1705–1751) and Johann Adam Schweickart (1722–1787) to document gems for him. The project research has been able to confirm that Stosch did indeed employ an atelier of draughtsmen, some of whom, such as Ghezzi and Odam, were also connoisseurs of gems, to document his own cabinet of gems as well as those from other European collections. These artists worked in a truly archaeological spirit, focusing on the accuracy of their drawings, but also carefully recording data on the gemstones, including type (mineral), size, state of preservation, provenance of the reproduced pieces and even making extensive comments on the iconography (Figure 6). These standards appear to have been particularly important to Ghezzi and Odam, whose comments on their drawings fully explain the visualised concepts and interpretations. Their drawings were more than just records of what gems looked like, they were also interpretations of the artefacts based on the same methodologies used by archaeologists to decode the iconography of gems today. The aim was not only to reproduce mechanically, but to record artefacts in the context of contemporaneous knowledge of gems and ancient civilisations.

These illustrations were meant not only for the publication of Stosch's own intaglios, but also for an even more ambitious project of his—a ‘universal history of the ancients’ (Borroni Salvadorri Reference Borroni Salvadori1978: 574). This general study was, in fact, a ‘collection of collections’ supported by illustrated documentation. The sketches of the gems, alongside Stosch's famous Atlas of architectural and topographical drawings, also largely produced by his artists-collaborators such as Ghezzi, Odam and Preisler (Zazoff & Zazoff Reference Zazoff and Zazoff1983: 66), were exhibited in his home museum to present the history, mythologies, customs and ceremonies of the ancient Egyptians, Etruscans, Greeks and Romans to all visitors welcomed by the collector.

Transformation of antiquarianism into proto-archaeology

This project reveals, and continues to unravel, Stosch's crucial role in proto-archaeology and the creation and exchange of knowledge during the eighteenth century. The biggest beneficiary of Stosch's incomplete research projects was Johann Joachim Winckelmann, whose work on the catalogue of Stosch's gem collection and archive formed the crucial part of his Geschichte der Kunst des Althertums (Reference Winckelmann1764). Moreover, it is now clear that the concept of systematic investigation of engraved gems was invented by Stosch long before Adolf Furtwängler's fundamental work Die antiken Gemmen appeared in 1900. Stosch's impressive organisational skills and curation led to the first fully documented archaeological record of a vast number of gems.

The author would like to thank Hadrien J. Rambach and Ulf R. Hansson for their cooperation in the project, fruitful discussions and exchange of knowledge; Gabriella Tassinari for her constant support and help in the research; and Ewa Nogieć-Czepiel, Bożena Chmiel, Bożena König and Katarzyna Migacz for their assistance in documenting the collection of gem drawings in the Princes Czartoryski Museum in Krakow.

This research receives funding and operates thanks to the National Science Centre Poland (grant 2019/33/B/HS3/00959).

From antiquarianism to proto-archaeology: Philipp von Stosch (1691–1757) and the study of engraved gems
×

From antiquarianism to proto-archaeology: Philipp von Stosch (1691–1757) and the study of engraved gems
×

From antiquarianism to proto-archaeology: Philipp von Stosch (1691–1757) and the study of engraved gems
×
×