The Goths, the Wielbark Culture and over 100 years of research on the eponymous site 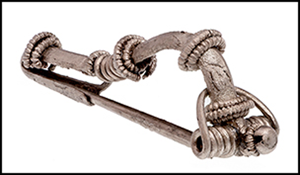 The cemetery site for which the Wielbark Culture was named has been known for over a century. The scientific value of the site is, however, only now beginning to be realised. With a continuous sequence of use spanning five centuries, the site may hold clues that can shed new light on population continuity and the migrations of the Goths.

Over 100 years ago, near the village of Wielbark on the outskirts of the town of Malbork (German: Marienburg) in northern Poland, remnants of a huge cemetery dating from the Roman period were discovered (Figure 1). Systematic archaeological excavations led by the Town Museum of Malbork (Städtisches Museum Marienburg) began in 1927 and continued until 1936 (Andrzejowski & Martens Reference Andrzejowski, Martens and Kokowski1996; Kleemann Reference Kleemann2017). Despite the fragmentary state of knowledge, the number of finds recovered from the site, and their scientific value, was so significant that virtually every typological and historical study of pre-Roman and Roman-period material culture in this part of Europe was based on this assemblage (e.g. Bohnsack Reference Bohnsack1938; Schindler Reference Schindler1940). At the time of its discovery, the cemetery was associated with the Germanic Goths, as described by ancient historians such as the fourth-century AD writer Ammianus Marcellinus (Res Gestae) and sixth-century AD historian Jordanes (De origine actibusque Getarum). During their migration from the mythical Scandinavian homeland to the Roman Empire, the Goths lived in northern Poland for several generations. The size of the cemetery and subsequent scholars’ conviction of its relationship with the Goths have made it an eponymous site for an archaeological culture—the Wielbark Culture (cf. Wołągiewicz Reference Wołągiewicz1974). The Wielbark Culture is associated with the area from the southern coast of the Baltic Sea to the western part of Ukraine during the period between the beginning of the Roman period (first century AD) and the migration period (fifth century AD) (Heather Reference Heather1998; Kokowski Reference Kokowski, Hansen and Bitner-Wróblewska2010). Palaeoenvironmental conditions of the site and its locality were never explored during the early investigations of the cemetery and, regrettably, almost all artefacts and records documenting the early twentieth century excavations at Malbork-Wielbark were lost during the Second World War.

Figure 1. Location map showing the Malbork-Wielbark site and areas of investigation: A) cemetery; B) remains of Prussian fortifications from the nineteenth to twentieth centuries (graphics by M. Sykuła).

Research was resumed in 2008 as a collaborative Polish-German project. Since 2017 the research has been funded as a scientific project of the Polish National Science Centre (2016/21/B/HS3/03159), and has focused on reconstructing a full archaeological and palaeoenvironmental record of the prehistoric human activity at the cemetery.

The results of the recent research show unambiguously that the site of Malbork-Wielbark is one of the biggest necropolises between the Baltic Sea and the foreland of the Black Sea. To date, more than 2000 burials have been identified in the cemetery (Kleemann Reference Kleemann2017; Łuczkiewicz & Kuzioła Reference Łuczkiewicz and Kuzioła2019). It is also one of the few sites that provides a continuous sequence of burials and associated material culture from the mid second century BC (late pre-Roman Iron Age) until the beginning of the fifth century AD in Barbaricum. Graves from the late pre-Roman Iron Age, primarily cremation burials featuring an urn and pit (Figure 2A–B), sometimes with weapons (Figure 3), constitute about 15 per cent of all burials. The cemetery was used most intensively during the Roman period, particularly the Late Roman period (third to fourth centuries). During this time, inhumation graves predominated (Figure 2C); graves with weapons virtually disappeared and the grave goods associated with female burials became more complex (Figure 4). This cemetery is unusual in that its longevity meant that an extraordinarily high number of burials were destroyed by later graves.

Figure 4. Finds assemblage from a female burial at Wielbark (photograph by P. Maciuk).

Interestingly, a large proportion of the vessels in the graves appear to have been made specifically as cremation urns that could not have retained liquids and therefore would have been useless for everyday purposes. This is indicated by the physico-chemical analyses of pottery (Daszkiewicz et al. Reference Daszkiewicz, Łuczkiewicz, Kleemann and Kuzioła2019). Chemical analyses of the composition of metal objects from the cemetery shows that the inhabitants of this area were quickly reached by the impact of the Roman Empire, the so-called cultural globalisation in the era of Augustus.

The scientific value of this unique cemetery is enormous. The example of continuous use of the site for a period of over 500 years and the absence of evidence for the participation of the local communities in the migration of the Goths mean it is possible to reconstruct the complexities of local beliefs and burial practices, supra-regional contacts and, above all, to study the connections between the Wielbark Culture and the earlier communities from the late pre-Roman Iron Age. This can help to determine whether there was continuity of communities and enable a careful modification or redefinition of the concept of the Wielbark Culture and its relationship to the Goths.

The palaeogeographic and palaeobotanical studies are intended to reconstruct the landscape on the site during the period of use of the cemetery and understand the scale of its later transformations; establish periods of land-surface stability (pedogenesis), geomorphological activity (sedimentation) and land-use phases; and determine the origin of soil deposits that form the cultural layers.

The necropolis is located in the marginal zone of the moraine plateau, on the edge of the Vistula River delta (see Figure 1). It was founded on a low dune hillock covered with sandy soils of low agricultural value (Podzols). More fertile soils (Luvisols, Gleysols, Fluvisols) dominate in the surrounding area (moraine, valley) and provide space for farming. The cultural layer associated with the cemetery was subsequently covered with a 2.5m-thick series of younger sediments (Figure 5): aeolian sand accumulated during the migration period; colluvial sediments formed during agricultural use in the Middle Ages; and another sandy aeolian layer was deposited during the Little Ice Age. The palynological characterisation of the Roman period (Figure 6) has been determined on the basis of changes in the vegetation and in the increase of anthropogenic indicators. Low AP/NAP (arboreal pollen/nonarboreal pollen) ratios and the appearance of human indicators of grazing (Plantago lanceolata, Rumex), crops (Secale cereale, Cerealia type) and ruderal plants (Artemisia, Urtica, Poaceae) all result from human economic activity at that time. Radiocarbon results in the next stage of our studies will allow for absolute dating of the palynologically designated episode.

Figure 5. Pedo-lithostratigraphy of the site during excavation in 2019: left) photograph; right) interpretation (photograph and graphics by M. Jankowski).

Figure 6. Pollen diagram of the site; the palynological characterisation of the Roman period is shown in the red lines; pollen grains discovered at the site: A) Artemisia; B) Plantago lanceolata; C) Rumex; D) Cerealia type; E) Secale cereale (graphics by A.M. Noryśkiewicz).

It is now clear that at the Malbork-Wielbark site the community had chosen an infertile and naturally limited area for their cemetery and not only the one overlooking the valley. New archaeological investigations, including biological (DNA; strontium (87Sr/86Sr) isotope) and physico-chemical analyses, combined with palaeoenvironmental reconstruction, will provide a comprehensive picture of the populations using the Malbork-Wielbark cemetery. Such an interdisciplinary approach may be crucial for achieving a better understanding of the settlement preferences, use of social spaces and the relationship with the surrounding landscape of the communities that used the cemetery over such a long period.

The Goths, the Wielbark Culture and over 100 years of research on the eponymous site
×

The Goths, the Wielbark Culture and over 100 years of research on the eponymous site
×

The Goths, the Wielbark Culture and over 100 years of research on the eponymous site
×
×