Hunting in the desert: assessing the form and use of kite-like structures in the western Sahara 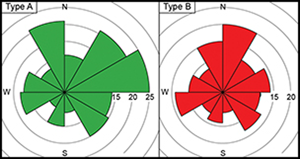 Nearly 500 kite-like structures have recently been discovered in the western Sahara using high resolution satellite images. Although four distinct types with different morphologies have been distinguished, their characteristics, topographical location and orientation in the landscape indicate that they are all most likely hunting traps.

In the last decade, more than 6000 desert kites—a form of archaeological mega-trap—have been catalogued in the Middle East using high-resolution satellite imagery (Barge et al. Reference Barge2020). Further hunting-trap structures, formed of long walls, have also been discovered in the Hamada al Hamra desert region, Libya (Giannelli & Maestricci Reference Giannelli and Maestrucci2018, Reference Giannelli and Maestrucci2019). Further to the west, in the heart of the western Sahara, new research has identified nearly 500 additional structures using satellite imagery; some are isolated in the Saharan vastness, but most are distributed in two main concentrations. The first of these is located between the Hoggar Mountains and Erg Chech, in the Acedjerad and Ahnet region, while the second begins between Erg Iguidi and Erg Chech, before stretching linearly along the Hank escarpment in Mauritania (Figure 1). Although these structures differ significantly from desert kites sensu stricto, as do those identified in Libya, they present morphological characteristics and choices of location and orientation that suggest they were also hunting structures—in this article, we refer to these structures as ‘kite-like’. Satellite imagery makes it possible to compare the layout of such kite-like structures and to distinguish several different types. It also allows the environmental characteristics of their locations to be observed. The corpus used in this study can be viewed online at: https://archaeologie.bemerkenswelt.de/DESERT%20KITES/Sahara.html and http://globalkites.fr/.

Figure 1. The locations of kite-like structures (figure by O. Barge).

The kite-like structures in the western Sahara are typically formed of two long, converging walls (driving lines). In a small number (6.2 per cent) of cases, one or two additional walls have been inserted between these driving lines. Four distinct types can be distinguished (Figure 2):

Figure 2. Representative examples of kite-like structures for each type (figure by the authors).

A further 60 kite-like structures were identified, but their type remains undetermined due to either their poor state of preservation or the quality of the associated satellite imagery. It should be noted that the above four types are not all equivalent in terms of size. The average length of the driving lines (Figure 3A) shows that Type D is the largest, followed by Type B. Types A and especially C were very modest in size. Type C is the only type with several cells—generally between two and seven—although some could present with greater numbers (Figure 3B).

Figure 3. A) Average length of driving lines per type; B) histogram of the number of cells (Type C) (figure by the authors).

Regarding spatial distribution (Figure 4), Type A is represented all over the study region. In contrast, Type B is concentrated predominantly to the west, in the Hank region. Parallels for Type B structures exist in the Tripolitania region in Libya, although it is unusual for these structures to terminate in a cell (Barge et al. Reference Barge2020). Thus far, Type C structures are concentrated in the Acedjerad region and have not been identified elsewhere. Finally, Type D occurs mainly at the south-eastern end of the long linear concentration on the Hank escarpment; comparable structures have also been recorded in the Jebel al Husawinah, Libya. All of the types discussed, however, are very different from the kite-like structures of the Nama Karoo in South Africa.

Figure 4. Different geographical ranges for the different types of kite-like structure (figure by the authors).

Preferential orientation in a given direction of such kite-like structures suggests that they were traps intended to capture animals during their migrations (Crassard et al. Reference Crassard2022). An analysis of the orientation of the structures examined here shows no clear trend for Types A and B (Figure 5, above). In contrast, Type C tends to be oriented towards the east and Type D towards the south-east. The histogram of the angle of orientation of the kite-like structures and the orientation of the slopes on which they are built (Figure 5, below) takes the form of a normal distribution, centred on 0, in the case of Types A, B and C. This emphasises the fact that structures of these three types tend to be built in the direction of the slope, with the opening downslope so that animals are funnelled upslope into the trap. It can be suggested from these observations that Types A and B were preferentially built along the slope in order to trap animals during their local movements. Type D structures, on the other hand, are positioned according to migration routes. This could also be the case for Type C, although it is notable that their cells were built in a higher position, with the driving lines extending downwards.

The tendency of kite-like structures to be positioned according to the local terrain is clear in many cases. For example, kite-like structures built on opposite sides of a valley with opposing orientations (Figure 6A) are often encountered. Similarly, around the Igliten depression, a possible palaeolake, Type C structures are oriented primarily in the direction of the slope, towards the depression (Figure 6B).

While only field survey could confirm this hypothesis, there are several strong arguments that suggest that the western Sahara kite-like structures are indeed traps. First, their shape is generally comparable to the Negev V-shaped kites. The presence of at least one cell for most kite-like structures does not prove that these were pit traps, but their signature on satellite imagery is identical to that of cells currently established to be such traps (Crassard et al. Reference Crassard2022). In addition, the orientation of the constructions shows that they are compatible with hunting techniques using large traps, regardless of whether the catchment area was local or targeted at migration routes. Finally, kite-like structures were built to take advantage of the local terrain; in particular, there was almost always (except in only 8 per cent of cases) a break in slope between the end of the driving lines and the cell. In the case of desert kites, this break in slope was used to hide the entrance to the trap from the animals following the driving lines.

The discovery of kite-like structures in the western Sahara naturally raises many questions that cannot be answered by satellite imagery. Which species were targeted? Who built and used these structures? These questions could only be answered by assessing the structures' chronology. Today, these structures are spread across areas of extreme aridity, although many face towards an oued or depression, suggesting the local presence of water (at least for part of the year) that may have been exploited by grazing animals. Their period of use may therefore date to the last wet optimum of the Sahara, between approximately 9000 and 5000 BP (Tierney et al. Reference Tierney, Pausata and deMenocal2017), when these places were still inhabited or visited by nomadic groups (McGee & deMenocal Reference McGee and deMenocal2017).

Fieldwork is necessary to answer these questions conclusively. The discovery of numerous kite-like structures in the western Sahara, however, is an important addition to the global corpus of known mega-traps and adds important new data to the debate regarding subsistence strategies related to these structures.

This research received no specific grant from any funding agency or from commercial and not-for-profit sectors.

Figure 1. The locations of kite-like structures (figure by O. Barge).

Figure 2. Representative examples of kite-like structures for each type (figure by the authors).

Figure 3. A) Average length of driving lines per type; B) histogram of the number of cells (Type C) (figure by the authors).

Figure 4. Different geographical ranges for the different types of kite-like structure (figure by the authors).

Hunting in the desert: assessing the form and use of kite-like structures in the western Sahara
×

Hunting in the desert: assessing the form and use of kite-like structures in the western Sahara
×

Hunting in the desert: assessing the form and use of kite-like structures in the western Sahara
×
×