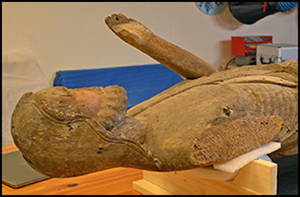 This project develops theoretical as well as methodological tools for the study of ancient wood, focusing on wood-use in North-eastern Europe within the period AD 1100–1600. The authors approach wood within the framework of object biographies and link the study of wooden artefacts with broader archaeological understandings of formation processes and environmental reconstruction.

The global crisis of diminishing forest cover has made historical wood-use particularly topical. For premodern communities living in the subarctic region, wood was ubiquitous, and its analysis provides insights into their dependence on woodlands. Despite its omnipresence, research on ancient wood currently falls across several disciplines. To overcome these disciplinary divisions, our project, ‘Carving out Transformations: Wood Use in North-Eastern Europe, 1100–1600’, brings together scholars from different disciplines to develop theoretical as well as methodological tools for the study of ancient wood. Here, we describe our approach to wood within a framework of object biography, and connect wooden objects to archaeological concepts of formation processes and environmental reconstruction.

Our core question is how wood and wooden objects moved around and were transformed in North-eastern Europe during the Middle Ages, and how these movements were entangled with lifeways and interactions between humans, animals, the environment and the divine. North-eastern Europe constitutes a particularly interesting case study for the pre-modern use of wood. There, urbanism reached its northernmost point, and the vast forest wilderness began. It was also a frontier region, where settled agricultural communities and those practising hunting and gathering, herding, and slash-and-burn agriculture interacted.

The materiality of multiple objects

Our project engages with contemporary debates on materiality, a concept encompassing both physical entities and cultural processes. Despite extensive discussions on materiality in the humanities, the dialogue with material sciences has, to date, been less rigorous. To find points of access across disciplines, our project employs the conceptual methodology of ‘object biography’. Emerging in the 1980s, the methodology has since been critiqued and transformed, with the introduction of such alternative concepts as ‘itinerary’ (Joyce & Gillespie Reference Joyce and Gillespie2015), and ‘multiple objects’ (Jones et al. Reference Jones, Díaz-Guardamino and Crellin2016). Understanding these conceptual changes is vital for approaching wood as a material, medium and agent of transformation.

Our approach to wood requires a multi-dimensional research strategy incorporating the material, social and cultural study of objects. The methodology can be characterised as ‘following the material’ (Weismantel & Meskell Reference Weismantel and Meskell2014). Starting from the material substances, and the locations in which they were changed, circulated and deposited, the analysis concentrates on the presence of wood in different locations, and the representations of which it was part.

The acidic soils of North-eastern Europe do not favour the survival of ancient wood, but there are certain environments in which it can endure in pristine condition; these include anaerobic urban cultural layers that preserve wooden objects, architectural features and tools of woodworking (Morris Reference Morris2000; Gläser Reference Gläser2006). While the most famous of such places is Novgorod with its mass of organic finds (Brisbane & Hather Reference Brisbane and Hather2007), other towns, such as Turku, have also revealed large assemblages of similar objects (Figures 1–2). Bogs distributed widely across the subarctic wilderness also provide waterlogged conditions in which ancient wood can survive (Taavitsainen et al. Reference Taavitsainen, Vilkuna and Forssell2007). Although wooden bog finds are typically individual stray objects, their wide geographic distribution gives them particular importance. In addition, Northern European churches house hundreds of medieval wooden sculptures (Kroesen & Schmidt Reference Kroesen and Schmidt2009) that have not been viewed as archaeological objects in the conventional sense. We have chosen these three very different material groups as the basis for analysing the varied use of wood in the Middle Ages, but we also utilise environmental data to build a broader context for medieval wood-use. This balances the study of objects with the analysis of the impact of humans on northern forests (e.g. Reilly Reference Reilly, Brisbane, Makarov and Nosov2012; Bunting & Farrell Reference Bunting and Farrell2018).

Figure 1. Late fourteenth-century wooden bowl, possibly made from a deciduous tree, found in the town of Turku (photograph by J. Harjula).

Figure 2. Underside of the wooden bowl (Figure 1), with an apotropaic cross on the base, found in the town of Turku (photograph by J. Harjula).

There are four essential phases in the life cycle of wood in medieval society, each with specific research questions. The first is the acquisition of wood. In reconstructing this phase, understanding palaeoenvironmental circumstances is crucial for determining the quality and availability of trees (Alenius et al. Reference Alenius, Saarnisto, Taavitsainen and Lunkka2010). The project also aims to determine the resulting impact of the consumption of wood, for manufacturing objects and for fuel and construction, on the premodern landscape.

In addition to dating objects, the identification of tree species is a rudimentary procedure (Vuola Reference Vuola2019). Botanists usually conduct species identification by analysing the cellular structure of wood, but the project also assesses the potential application of proteomics or zooarchaeology by mass spectrometry (ZooMS). ZooMS is based on determining sequence differences in peptides, which allows us to distinguish between species. Plants also produce identifiable peptides that could be recognised by the ZooMS technique. This depends on ZooMS adequately processing wood samples, which is not yet fully reliable, but which shows much promise.

After acquisition, the wood was prepared for use. Techniques used for transforming wood include turning, carving, bentwood, jointing and cooperage. Toolmarks, production waste and the surviving woodworking tools can all help to reconstruct production techniques. This raises questions about the scale of production and its requirements: does it represent casual domestic activity or a commercial workshop? This in turn dictates the impact on local resources.

Baxandall (Reference Baxandall1980) highlights the importance of the materiality of wood for medieval ecclesiastical sculptures, emphasising their ‘woodness’. Conversely, many wooden objects were designed to hide their raw material under rich polychrome, textiles and other adornments (Taubert Reference Taubert2015). Analysing whether such a duality between presence and representation is relevant for the study of wooden objects requires sensitivity to the materials.

The third phase of wood-use is the distribution and sale of finished products. The traditional focus of archaeological, art-historical and historical research has been the provenance of products; the networks of trade through which they moved; which products were produced and sold locally; which were regionally traded; and which were part of interregional commerce. This project, however, also considers the more emotive aspect of wooden objects by tracing their biographies through written evidence. We will examine fifteenth- and sixteenth-century examples of wood being specifically documented and commented on in writing. This will form the basis for a comparison between the views expressed in the writing and the archaeological evidence for wood resources and management.

The fourth and final phase in the lives of wooden objects, their use, is the most difficult to access. In reconstructing use, acknowledging the heterogeneity of wood is pivotal. In churches, wooden objects evoked the divine, forming part of a deliberate visual vocabulary in sacred space (Figure 3). Wood communicated the divine through material representation of the ethereal. Wooden sculptures act as agents with the capacity to influence the beholder's perception and induce a desire to commune with God—yet they are carved and crafted by human hands. In the words of Binski (Reference Binski2019: 3–4), “the human ‘poetics’ of materials matter because they lend rationally guided eloquence to things: materials and style together possess intent”. Wooden objects were not immutable and could be reworked, making possible the alteration of sculptures; the identities of holy figures could be altered during their active liturgical use (Tångeberg Reference Tångeberg2005) and were, particularly after the Reformation.

Figure 3. Fourteenth-century sculpture of the Resurrected Christ from the Church of Karjaa, prepared for dendrochronological analysis by conservator Jaana Paulus (photograph by K. Vuola).

The project's aim is to produce individual case studies on each of the three object categories: objects from the bog, the church and the urban context; but it will also seek to find connections between the groups. We will consider whether similar wood species were chosen for each category, or if there were associations between species and use. We will investigate the similarity of production techniques between the different groups. In addition to these practical and technical concerns, we will produce environmental reconstructions related to forests and the impact of wood-use. Ultimately, the project aims to understand the role of wood in socio-cultural, ecological and theological networks, and in particular to recognise the multiple connections between these.

This research received funding from the Academy of Finland (decision 315540).