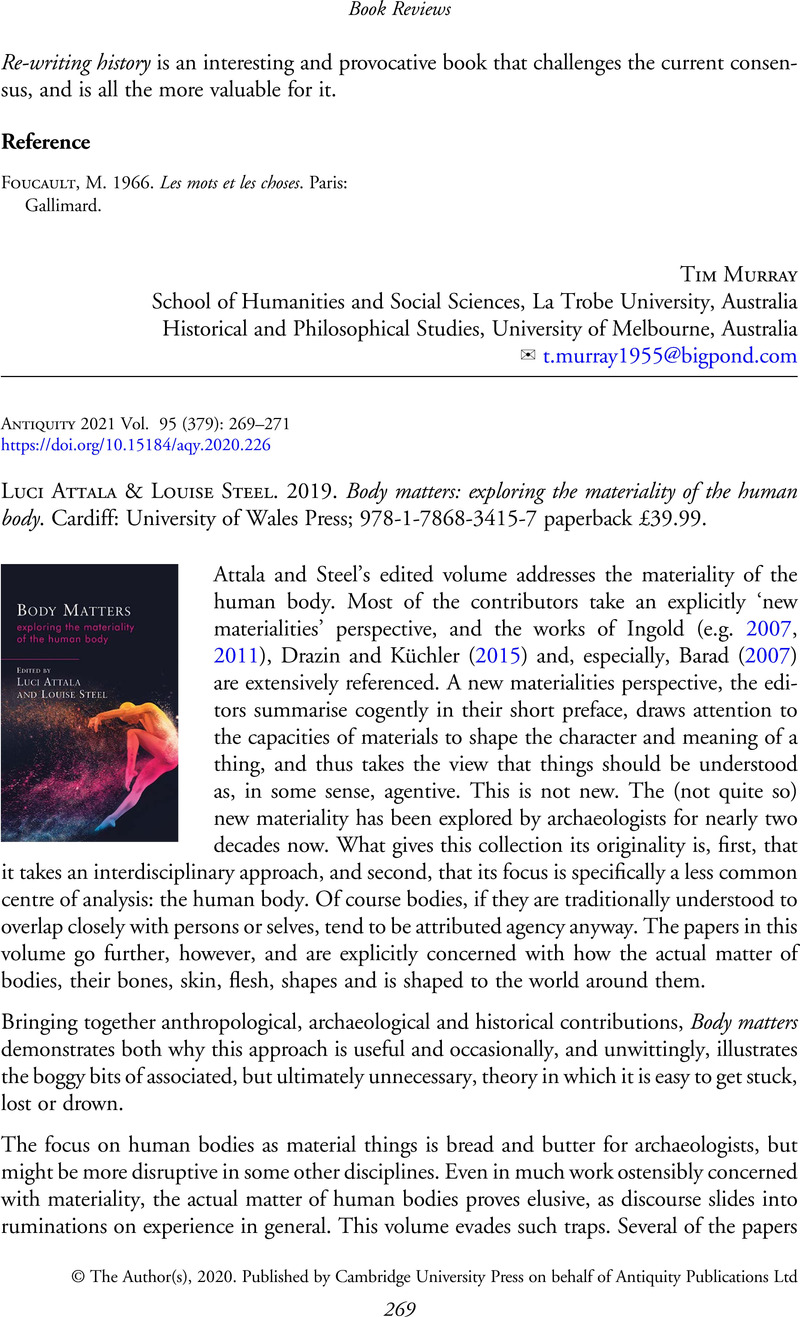 An abstract is not available for this content so a preview has been provided. To view the full text please use the links above to select your preferred format.
Type
Book Reviews
Information
Antiquity , Volume 95 , Issue 379 , February 2021 , pp. 269 - 271
DOI: https://doi.org/10.15184/aqy.2020.226[Opens in a new window]
Copyright
Copyright © The Author(s), 2020. Published by Cambridge University Press on behalf of Antiquity Publications Ltd 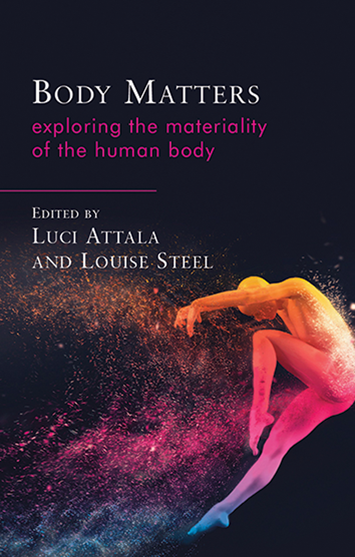 Attala and Steel's edited volume addresses the materiality of the human body. Most of the contributors take an explicitly ‘new materialities’ perspective, and the works of Ingold (e.g. Reference Ingold2007, Reference Ingold2011), Drazin and Küchler (Reference Drazin and Küchler2015) and, especially, Barad (Reference Barad2007) are extensively referenced. A new materialities perspective, the editors summarise cogently in their short preface, draws attention to the capacities of materials to shape the character and meaning of a thing, and thus takes the view that things should be understood as, in some sense, agentive. This is not new. The (not quite so) new materiality has been explored by archaeologists for nearly two decades now. What gives this collection its originality is, first, that it takes an interdisciplinary approach, and second, that its focus is specifically a less common centre of analysis: the human body. Of course bodies, if they are traditionally understood to overlap closely with persons or selves, tend to be attributed agency anyway. The papers in this volume go further, however, and are explicitly concerned with how the actual matter of bodies, their bones, skin, flesh, shapes and is shaped to the world around them.

Bringing together anthropological, archaeological and historical contributions, Body matters demonstrates both why this approach is useful and occasionally, and unwittingly, illustrates the boggy bits of associated, but ultimately unnecessary, theory in which it is easy to get stuck, lost or drown.

The focus on human bodies as material things is bread and butter for archaeologists, but might be more disruptive in some other disciplines. Even in much work ostensibly concerned with materiality, the actual matter of human bodies proves elusive, as discourse slides into ruminations on experience in general. This volume evades such traps. Several of the papers examine the way that the body is materially constituted—such as Rahmen's study of the significance of water in the proper formation of children's bodies in North-west Amazonia, or Attala's enjoyable discussion of how the ingestion of plants could be seen as a symbiotic relationship between people and, in this case, the hallucinogenic plant Banisteriopsis caapi, the plant from which ayahuasca is derived. This is an example that captures well the kind of mutualism that the volume promotes between body and not-body. Other chapters consider the use to which the material of the human body is put, during life and after death. Steel thinks about what the treatment of skulls and heads might say about the relationship of Bronze Age people to their ancestors, for example, and Burton tells the fascinating story of the finger of St Germanus, a relic that was brought to Selby sewn into the upper arm of the abbey's founder, Benedict.

Common to many of the chapters is a desire to problematise the separation between the human body and the outside world, a separation that sometimes morphs into that between person and thing or between individual and everything else. These are murkier theoretical waters. First, the spectre of ‘Enlightenment thought’ is raised and condemned, with few references and a great deal of straw-mannery. Second, to point to permeable boundaries or problems of categorisation does not give sufficient cause to demolish entire categories altogether. It is still useful to think that individuals exist, in the colloquial sense of being people who are loci of agency and experience. Indeed, most interpretive social archaeology falls apart without such a concept. Readers with even a passing interest in this problem will recognise that people are in a co-constitutive relationship with the world around them, but reject the idea that separate persons do not exist. Blurring a line is not dissolving a difference.

The inclusion of the two chapters on medieval history, by Burton and Webster, undermines some of the rather naïve but commonplace assertions in archaeology about personhood and bodies. Webster's paper, on the hanging and resurrection of the delightfully named William the Scabby in late medieval Swansea, and Burton's work on saintly relics clearly demonstrate cases in which the individual life-histories of particular bodies matter very much. We are rightly wary of retrojection—making everything in the past look like nineteenth-century Britain, for example—but should be equally wary of making everything in the past look like twentieth-century Melanesia. At their best, history and anthropology illustrate for archaeologists the huge range of possibility in the way that cultures conceive of and use bodies.

The language of new materiality theory can be opaque and some chapters, notably those by Govier and Fayers-Kerr, are challenging to construe. For example, reading Fayers-Kerr state that “the colloquy between people, afflictions and the emergent qualities of materials provides a window into underlying workings, whose nature might be human, non-human, biotic or abiotic, but into which a Spinoza-esque encounter-prone conative body seeks to integrate” (p. 123) left me weeping into my emergent coffee. At their best, however, these essays are provocative, original and engaging. Coard's meditation on what was being removed in the process of cleaning an old household rug, for example, is clever and original. Her ruminations on shed skin were witty and educational. (I did not know that one person in their life produces the weight of a whole other person in the form of dusty skin flakes.)

Ultimately, I am not convinced that a new materialities approach always offers a deeper or different understanding of the archaeological or anthropological observations with which they are concerned. I sometimes craved a section that would tell me that ‘this is what we used to say, and this is how different it looks through the new materialities prism’. When language is of the kind where you understand the individual words, but still find the meaning of the whole elusive, some such hand-holding would have been welcome. Nevertheless, this wide-ranging volume offers some original insights, with a relaxed and mature interdisciplinarity.