Manufacture and use: bone and tooth objects from the Late Bronze Age ‘shaman's grave’ at Przeczyce, Poland 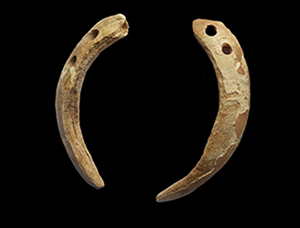 The microscopic analysis of tool marks on objects from the Late Bronze Age ‘shaman's grave’ at Przeczyce, Poland, has demonstrated that two wild boar tusk pendants, a bone disc and a set of bone tubes were manufactured exclusively using metal tools. We argue that the tubes were a musical instrument that originally consisted of several separate pieces, rather than a pan flute, as has previously been suggested.

Excavations at Przeczyce in 1961 and 1962 resulted in the discovery of 874 graves dated to c. 900–550 BC. An assemblage of animal hard tissues (n = 94) survived primarily in the inhumation graves, which account for 83 per cent of the burials. This article focuses on the famous Late Bronze Age ‘shaman's grave’ (c. 900–750 BC), presumably named due to the age and sex of the deceased and the presence of a set of unique grave goods, which have been interpreted as shamanic accessories (Szydłowska Reference Szydłowska1968). Our study analysed tool marks and micro-wear present on a collection of artefacts from this grave that were made from bone and teeth (Figure 1). These artefacts were observed and documented using an Olympus SZX9 stereoscopic microscope at up to 57× magnification.

Figure 1. The ‘shaman's grave’ from Przeczyce: 1) location of the site; 2) grave plan: green indicates objects made of bronze, grey those of clay, while the blue square shows the concentration of artefacts made of bone and teeth; 3–4) location of the assemblage within the grave; 5) bone and tooth objects (source: Szydłowska 1968, with modifications; photographs 3–4 by T. Kubiczek; photograph 5 © J. Baron).

The grave belonged to a male aged approximately 60 years. The right arm was stretched out beside the body, while the left arm was bent and placed on the chest. The furnishings included at least three ceramic vessels and four metal objects, none of which were atypical of this site, nor other sites with a similar chronology. What makes the grave unique, however, is an assemblage of objects made of animal bones and teeth that were placed by the individual's right shoulder. This consisted of two pendants made of wild boar tusk, a bone disc and a set of nine bone tubes, the latter of which are considered to be a musical instrument (Figure 1). A catalogue of the raw materials, as well as traces of manufacture and micro-wear, is presented in Table 1.

The surfaces of both pendants were heavily damaged; as a result, traces of the manufacturing process were not visible. The perforations in both pendants were made from both sides—a common practice in the processing of such hard materials (e.g. Haddow et al. Reference Haddow2019) (Figure 2).

The disc was punched out of a cattle pelvic bone to form its circular shape and then finished by abrading the edges (red arrow in Figure 3: 1). Its flat surfaces were also scraped with a metal knife, which left characteristic tool marks: groups of long, narrow, parallel lines (Figure 3: 2), in some areas interrupted by transversal cuts. This latter evidence suggests occasional breaks in the performance of these long, scraping movements (Figure 3: 3).

The nine hollow tubes (T1–T9) consisted of carefully worked long bone diaphyses from small mammals (Table 1). Their medullary cavities were widened and their surfaces scraped with a metal knife (as denoted by the blue arrows in Figure 4). The maximum thickness of the tube walls reaches 1.5mm. Traces of scraping run along the long axis of each tube and, in the case of T2, they are oblique at the mouth. A single, deep, V-shaped cut mark on T2 confirms the use of a metal knife. Notably, we observed no abrasion and the whole process exclusively involved metal tool(s) used for both cutting and scraping.

The function of certain grave goods is frequently identified by their position in the grave and/or on the body. Here, the objects were placed by the right shoulder of the individual. Thus, they were not ornaments or parts of a costume used in the funerary ceremony but, rather, were added later. Although we classified the perforated tusks as pendants, the micro-wear present does not necessarily indicate this function. All we know is that they were suspended using another material, which resulted in rounding of the perforation edges. This may suggest that they served as decorations or dress elements, such as in the case of the Upton Lovell shaman's grave (Shell Reference Shell2015).

No micro-wear evidence was observed on the disc, and its function remains unknown. Similar circular objects have been recovered from contemporaneous sites and interpreted as quiver elements or lids (Baron et al. Reference Baron, Diakowski, Stolarczyk and Vitezović2016: 45).

The set of tubes was experimentally reconstructed as a pan flute (Polish: multanki), tuned to a pentatonic scale (Szydłowska & Kamiński Reference Szydłowska and Kamiński1965). For this reconstruction, the pipes were connected with wooden and leather elements, although ethnographic data suggest the use of wax or resin (Szydłowska & Kamiński Reference Szydłowska and Kamiński1965). Interestingly, no evidence of such joints was observed on the tubes. The only traces of use were glossy spots that were irregularly distributed in the centre of each of the bone shafts (Figure 4). Although careful scraping with a metal knife could produce a similar polish (Christidou Reference Christidou2008), the gloss clearly overlays and obscures the tool marks caused by scraping during the manufacturing process. The micro-wear may therefore indicate holding unbound tubes in the hand. We realise that leather binding could also have produced such a gloss, but we would expect this to be located equidistant from the proximal end of each tube. Binding in this manner would be necessary to form a proper pan flute (e.g. Baczyńska & Bąbel Reference Baczyńska and Bąbel2007). The random distribution of gloss therefore suggests that the tubes were each held separately. Szydłowska and Kamiński (Reference Szydłowska and Kamiński1965) highlight similar instruments from Central European folklore. The closest analogue is the Lithuanian skudučiai, which comprises several separate wooden pipes to be played by a group of boys or men (Senieji Lietuvos Instrumentai n.d.).

The microscopic analyses undertaken as part of this study demonstrate that the bone objects from the ‘shaman's grave’ at Przeczyce were manufactured through the use of metal tools. This is surprising, as flint scrapers were the preferred processing tool for osseous materials, at least until the end of the Bronze Age (Baron & Diakowski Reference Baron and Diakowski2018). Moreover, our research suggests that the musical instrument originally consisted of several separate pieces and did not resemble a pan flute.

Special thanks to Justin Bradfield for assistance with the language in the text.

Figure 1. The ‘shaman's grave’ from Przeczyce: 1) location of the site; 2) grave plan: green indicates objects made of bronze, grey those of clay, while the blue square shows the concentration of artefacts made of bone and teeth; 3–4) location of the assemblage within the grave; 5) bone and tooth objects (source: Szydłowska 1968, with modifications; photographs 3–4 by T. Kubiczek; photograph 5 © J. Baron).

Manufacture and use: bone and tooth objects from the Late Bronze Age ‘shaman's grave’ at Przeczyce, Poland
×

Manufacture and use: bone and tooth objects from the Late Bronze Age ‘shaman's grave’ at Przeczyce, Poland
×

Manufacture and use: bone and tooth objects from the Late Bronze Age ‘shaman's grave’ at Przeczyce, Poland
×
×