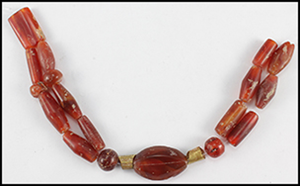 A multi-disciplinary research project in the Aras Valley, Armenia, focuses on the remains of the Late Bronze/Early Iron Age settlement of Metsamor. The results challenge prior understandings of the settlement's past and the role it played in the region, especially during the first centuries of the first millennium BC.

The Aras Valley is located in modern Armenia between the Ararat and Aragats mountain massifs, with its fertile fields and mild climate meaning that for centuries it was one of the most important economic regions of the Southern Caucasus. Lying at the heart of the valley, around 35km south-west of the modern capital city, Yerevan, on a crossroads of enduring routeways, are the remains of an ancient citadel. This place, which dominates the local landscape, is today known as the Metsamor archaeological site.

The site has been under excavation for decades, yet much remains unknown about Metsamor. Earlier excavations (Khanzadyan et al. Reference Khanzadyan, Mktychyan and Parsamyan1973) discovered kilns, liquid metal distribution canals and distinctive, large containers hewn in the bedrock and a substantial quantity of metal-manufacturing wastes, suggesting that Metsamor was a significant metallurgical centre. It was long believed that Metsamor was incorporated by force into the Urartian Kingdom (Khanzadyan et al. Reference Khanzadyan, Mktychyan and Parsamyan1973), but the results of a recent Polish-Armenian project (the Metsamor Archaeological Mission) challenge that theory. The project is a collaboration between the Polish Centre of Mediterranean Archaeology, the Faculty of Archaeology at Warsaw University and the Service for the Protection of Historical Environment and Cultural Museum Reservation, Ministry of Culture of the Republic of Armenia.

The focus of the Armenian-Polish team has been the northern slopes of the citadel hill, and excavations have targeted domestic dwellings and their faunal remains to reassess the development and economy of the settlement. Fieldwork undertaken since 2013 has revealed the remains of a settlement (the so-called ‘lower town’) below the citadel walls (Jakubiak et al. Reference Jakubiak, Mkrtchyan and Simonyan2019, Figure 1). While the citadel was in use from the Chalcolithic period until the end of the Bronze Age, with a hiatus dated to the Middle Bronze Age, the lower town appears to have existed only since the end of the second millennium BC and survived through to at least the sixth century BC (Jakubiak & Zaqyan Reference Jakubiak, Zaqyan, Pieńkowska, Szeląg and Zych2019; Figure 2).

The Metsamor Archaeological Mission has focused on domestic architectural remains in the lower town, supported by geophysical and landscape studies and the range of artefacts and ecofacts discovered at the site. The results of this project have made possible a reconstruction of the development of the lower town during the first millennium BC. At this time, the Aras River flowed much closer to the settlement, creating a risk of flooding and a marshy environment. Access to the settlement was undoubtedly more difficult than today and this made for a strategically defensible site in the region.

The occupation layers of the lower town yielded a large quantity of animal bones, many with butchering marks. A preliminary analysis of the osteological finds resulted in the determination of domestic and wild species of mammals, birds and fish. The assemblage indicates that animal husbandry was practised at the site, mainly cattle (Bos taurus) but also sheep (Ovis aries) and goats (Capra hircus). There were also horse (Equus caballus) bones present in the material, together with the remains of smaller equines, probably donkey (Equus asinus) and wild onager (Equus hemionus). Local wildlife is also represented in the form of red deer (Cervus elaphus), gazelle (Gazella subgutturosa), beaver (Castor fiber), badger (Meles meles) and hare (Lepus europaeus), as well as waterfowl: bean goose (Anser fabalis), mute swan (Cygnus olor) and grey heron (Ardea cinerea). The fish bones identified from the site belonged to the Cyprinus genus—a type of carp. A notable discovery among the faunal assemblage were four camel bone fragments; these are rare finds in the Caucasus. While camels are sometimes indicative of caravans, at least one bone fragment belonged to an immature individual, which may suggest that camels were bred in Metsamor. The osteological finds allow a reconstruction not only of the shifts in ancient animal husbandry in the region, but also the broader natural environment of Metsamor during the time of its occupation.

The initial fieldwork seasons revealed that the settlement had an interesting and dramatic history. The archaeological evidence suggests that the lower town had been almost completely destroyed at least twice in burning events, demonstrated by two subsequent conflagration horizons. The most significant destruction event took place in the late eighth century BC and can be associated with attacks by nomadic tribes on the north-eastern part of the Urartian Kingdom, which occurred in 715 BC (Jakubiak Reference Jakubiak2017). In Metsamor, these dramatic events are manifested as traces of a large fire and the destruction of a number of dwellings. In the centre of the settlement, the skeletons of several people were discovered (Figure 3). One individual was discovered holding a small goblet bearing a symbol of a trident. This symbol can be connected with Haldi, the most significant god in the Urartian pantheon. The vessel had been locally manufactured, but the presence of this typically Urartian religious symbol suggests that settlers at Metsamor had adopted the beliefs and culture of the Urartian Kingdom. Evidence indicates that Metsamor was resettled after this destruction event, but it must have been quite a long time later, as the victims of this violent attack were left unburied. The second destruction horizon can be dated to the end of the seventh century BC and linked with events preceding the downfall of Urartu.

Examination of the buildings in the lower town show that they survived the collapse of the Urartian Kingdom around 590 BC and continued to develop until the end of Achaemenid control over the Aras Valley. The inhabitants of Metsamor appear to have maintained some Urartian traditions for more than two and a half centuries after the collapse of the Kingdom. Urartian-style pottery and architecture continued in use alongside the subsequent local products and architectural styles.

Several high-status objects have been discovered in Metsamor, which may suggest the presence of a local elite. These artefacts, all discovered in the lower town area, include an impressive carnelian necklace with golden beads discovered inside one of the domestic dwellings (Figure 4), a selection of gold objects that may be part of personal ornamentation (Figure 5) and a bone pin topped with a carving of a small duck (Figure 6).

The recent fieldwork seasons in Metsamor have caused a significant shift in perceptions of the development of the settlement and its role in the region. The former supposition that the settlement was attacked and incorporated by force into the Urartian Kingdom cannot be sustained in light of the new evidence. There are no traces of any destruction dated to the turn of the ninth and eighth centuries, and the presence of Urartians in the Arras Valley from the eighth century onwards is beyond doubt. Even if Argishti I—the king of Urartu who ruled 785–764 BC—reached the region of Metsamor during his campaign, the hypothesis of the ‘brutal attack’ seems to be hardly possible (Jakubiak Reference Jakubiak2017). The events of that period can better be described as a well-planned political and economic expansion, probably taking place gradually over some time. It may be that instead of violent conquest, the Urartians adopted a strategy of negotiated peaceful incorporation of the fertile region of the Aras Valley into their kingdom. The fortified citadel settlement of Metsamor was not destroyed at the time of the Urartian expansion. Instead, it was transformed into a large village where the old defensive walls were not needed anymore. Traces of that shift can be seen in the centre of the lower town where the defensive circuit wall was utilised instead as a supporting wall for dwellings. The meeting of two different communities can be recognised in the architecture of Metsamor where it is possible to distinguish two different types of houses being erected at the same time. Excavations revealed that higher-quality stone-block structures existed side by side with pit houses. Pit houses are semi-sunken into the ground and then roofed, usually with wood.

Similar pit houses have been recorded on the neighbouring Aragats plain, but there they were dated to the Late Bronze Age (Smith Reference Smith1996). The archaeological evidence suggests that a wave of newcomers appeared in Metsamor at the time of the Urartian domination of the Aras Valley. Urartian texts mention several ‘displacement actions’ linked with the occupation of new territories (Salvini Reference Salvini2008). We suggest that the parallel styles of architecture and material culture evident at Metsamor reflect such a movement; perhaps a group of people resettled peacefully from the Aragats plain to the Aras Valley.

The Metsamor research project operates thanks to the National Science Centre (grant 2018/29/B/HS3/01843).