A princely tomb in central Italy: a planned discovery 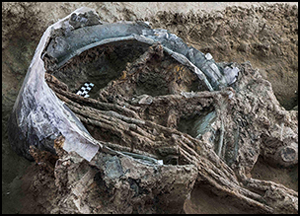 At Corinaldo, near the Adriatic coast in northern Marche, the discovery and excavation of a high-status tomb dating to the seventh century BC has illuminated wide-ranging aspects of Piceni Culture in this part of central Italy, while also highlighting the growing symbiosis between academic research and development-led archaeology in heritage conservation and planning processes throughout Italy.

The recent discovery of a princely tomb belonging to a Piceni leader at Corinaldo in central Italy represents an important milestone for Italian archaeology and for our knowledge of the Iron Age in the Marche region. This new discovery is the result of a combination of aerial survey, geophysical prospection and targeted archaeological excavation, undertaken by the multidisciplinary ArcheoNevola project, based in the University of Bologna, and carried out in advance of planned development. Collaboration with the Soprintendenza Archeologia Marche and the Municipality of Corinaldo allowed the project to carry out an impact assessment evaluation prior to the construction of a new sports complex in the Nevola River Valley. The success of the operation lies both in the value of the find, which is the first in this rare class of elite funerary monument to be discovered in northern Marche, and in the mode of discovery, as part of development-led archaeology.

ArcheoNevola takes advantage of the wide-ranging programme of research in the region being undertaken by the Bologna team, employing a variety of landscape-mapping technologies and non-destructive field techniques (Boschi 2019) to produce a diachronic reconstruction of the Nevola River Valley. There has been little archaeological exploration in the valley, despite evidence suggestive of wide cultural diversity within the area during the Iron Age and early Romanisation (Boschi 2018). Long-term aerial survey and integrated geophysical prospection have been combined to analyse the designated area systematically, revealing a previously unknown necropolis. Data derived from remote sensing provided a great deal of new information, allowing for advanced and accurate interpretation of the nature, state of preservation and type of material on the site. These data were crucial in informing the planning strategy of the subsequent excavation, restoration in situ and the proper recovery of this important find (Figure 1).

Following the site's initial identification by aerial photography, targeted geophysical prospection was undertaken, integrating geomagnetic and resistivity surveys by means of the vehicle-drawn ARP© system (Dabas 2009). The resistivity defined the extent and spatial organisation of the funerary area, also identifying a number of internal features. Magnetometry guided further evaluation through characterisation of the subsurface remains, including the presence of a large deposit of metalwork, confirming and qualifying the site's extraordinary archaeological potential. The results obtained proved of vital importance in providing the focus for the design of subsequent steps within the framework of urban planning and heritage conservation.

Data acquired by remote sensing meant that, before beginning the excavation, the team was fully prepared in terms of timing, staffing, site protection and security measures. The excavation comprised small-scale trial trenches followed by open-area investigation, and confirmed the results of the non-invasive survey. The remains of a high-status tomb were revealed, along with a unique, rich funerary deposit believed to belong to a princely Early Iron Age leader. This discovery has provided an extraordinary opportunity to investigate a type-site of the Piceni Culture, which has thus far been poorly documented in northern Marche, and is little understood despite its importance in the pre-Roman development of the area. Examination of bibliographic, archival and cartographic sources confirmed the previously unknown existence and special character of the site, while highlighting the proximity of the site to areas where field-walking survey had already revealed archaeological material. This ranged from abundant worked flints to the remains of a Roman bridge, probably connected with a longstanding (but now gone) ford across the river (Figure 2: dots 629 & 643). The strategic location of the local area is confirmed by its position as a hub in an ancient road system that crossed the countryside (Boschi 2018).

Our integrated archaeological approach revealed that the funerary area covered almost half a hectare, and comprised three large ring ditches along with later tombs dating to the Roman period. Excavation (Figure 3) focused on the central ring-ditch and, in particular, on a large and slightly off-centre pit, which contained an extraordinary collection of cultural material (Figure 4), including a bronze helmet, a variety of weapons, several bronze vessels and the remains of an iron-wheeled war chariot—unequivocal testament to the aristocratic status of the tomb's owner (Figures 5–6). The surrounding ditch, measuring 30m in diameter, marked out a funerary area that may originally have been covered by a mound.

The variety and profusion of the recovered material provides clear evidence of the power and distinction of the aristocratic elites during the late eighth to early sixth centuries BC Orientalising period in this part of Italy. This period is characterised by the presence of luxury objects, styles and motifs inspired by Eastern nobility (Naso 2000; Di Filippo Balestrazzi 2004). Full analysis of the pottery and other finds promises new insights into the cultural, trading and gift-exchange relationships of the aristocracy in the area. Outstanding among the hundred or more ceramic vessels recovered was an olla—a large ceramic jar or pot—imported from ancient Daunia (modern northern Apulia in southern Italy), symbolising the commemorated leader's significant political, military and economic power. Preliminary analyses date the tomb to the seventh century BC, with close parallels to the well-known Piceni Orientalising necropolises from southern Marche (Silvestrini & Sabbatini 2008). The excavations provided ample scope for experimentation in the use of modern recording methods, such as laser scanning, drone-based photogrammetry and high-resolution geophysical survey, while at the same time confronting the challenges of on-site recovery and consolidation. The collaboration between archaeologists and conservators working together on a daily basis, before and during the excavation, facilitated the preservation, and removal to secure storage, of the entire contents of the pit, using techniques calibrated and adapted to the needs of the individual objects.

Ongoing investigations at the site and analyses of the archaeometric, environmental and archaeozoological material will strengthen our understanding of the site's importance in terms of its chronology, ‘structural’ characteristics and ritual or cultural aspects. They will also reveal contemporaneous relationships within the broader populated landscape, promising new insights into the role of the Nevola Valley in the Iron Age settlement dynamics of the Marche region. Inevitably, questions remain about certain aspects of the tomb's morphology, including the possible existence of a covering mound as opposed to a circular ditch and bank, perhaps supplemented by standing stones or timber uprights.

Still under debate, too, is the unknown position of the body within the royal tomb. Comparison with similar aristocratic interments farther to the south suggest differing possibilities, perhaps with the body placed at a higher level immediately above the grave goods, or within a shallow pit nearer the centre of the ring-ditch; the royal corredo (funerary assemblage) at Corinaldo did not occupy that central position or yield any skeletal material. In either case, it seems probable that the body was placed somewhere at or near the ancient ground surface. If so, it would have had little chance of surviving the centuries of subsequent ploughing that have removed all traces of any above ground mound.

The discoveries at Corinaldo provide clear evidence for the potential of combined remote-sensing and geophysical techniques alongside traditional methods of archaeological fieldwork. There are also implications for strategies, methodological approaches and practical implementation within archaeological fieldwork more generally, not least in the ongoing development of curatorial and pre-development archaeology in Italy, which can be enriched by collaboration between archaeological academia, heritage offices and planners.

The author would like to thank the funding bodies of the project: the University of Bologna (DiSCi), the Municipality of Corinaldo, the Consorzio Città Romana di Suasa and the Fondazione Flaminia di Ravenna. Thanks also go to Ilaria Venanzoni and the Soprintendenza Archeologia Marche for their very useful cooperation, and to the Technical Office of Corinaldo for support with fieldwork logistics. Furthermore, the author acknowledges a special debt to Chris Musson for his encouragement at various stages of the research, and for his friendship and advice concerning the English version of the text.