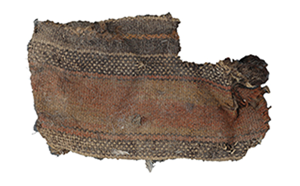 This study presents preliminary discoveries from Sding Chung cave, an early multi-burial cave site in the Himalayan highlands dating from 300BC–AD 300. Multiple human and animal bones within the cave provide unique evidence for understanding the diverse mortuary rituals and biocultural adaptations in this region.

Caves sites are more than merely dwelling spaces; they are often regarded as sacred places (Moyes Reference Moyes2012). One example of caves in the Himalayas being used in a ritual setting is the cave burials in Mustang, Nepal. These cave systems offer both natural and human-made spaces for burying the dead (Aldenderfer Reference Aldenderfer2014, Reference Aldenderfer2019; Simons Reference Simons2020). Although the grave goods from Mustang share extensive similarities with contemporaneous burials on the Tibetan Plateau (Lu Reference Lu2015), no comparable cave burials had previously been found in Tibet. Here, we report on a large burial complex from Sding Chung cave investigated in 2021, near the border between the Tibet Autonomous Region and Nepal. Despite its temporal overlap with those previously found in Nepal, the natural structure of and burial patterns within Sding Chung are unique, providing significant clues for understanding funeral practices in the western Himalayas.

Sding Chung cave (29°45´N, 84°23´E) is located at 5000m asl, on a mountain slope between the Gangdise and Himalayan Mountain ranges (Figures 1 & 2). It is a natural subterranean cave formed by rock collapse and water erosion during strong tectonic deformation. It is now dry, and is divided into an upper and a lower section, each with multiple branches. The 60m-long upper cave is connected to the lower cave through a 14m-deep shaft tunnel (Figures 3 & 4b). A large quantity of mixed human and animal remains, along with a few artefacts, were spread over the ground surface in both the upper and lower caves (Figures 4 & 5). We divided the site into twelve units and collected the remains accordingly (Figure 3). All artefacts were collected, while human and animal remains were selectively sampled, with the remainder left in situ. The remains were gathered predominantly from a few branch caves, although some bones (both human and animal) were found in the connecting tunnels. In the case of the human remains, we collected as many examples as possible, with a focus on skulls for future measurements and genetic analysis. This strategy, however, was applied mostly in the upper cave, due to dangerous working conditions in the lower section.

Figure 1. The location of the Sding Chung site (map by Z. Li).

Figure 2. The landscape of Sding Chung (photograph by F. Deng).

Figure 4. a) View from the tunnel of the upper cave; b) the shaft tunnel; c) scattered skeletons in LG1R; d) piled human skulls in LG1R (photographs by H. Lu & Z. Li).

In the upper cave, human and animal remains were densely distributed in the larger branches (SG2, SG3, NG4), along with a relatively small number of artefacts. Most of the human bones were well preserved but disarticulated and commingled. We found only two individuals, with the pelvis and vertebra attached by soft tissues, such as ligaments, and the overall lack of anatomical association may represent relocation—potentially via ritual practice or looting—having taken place after decomposition. The most frequently observed, and collected, human elements were crania, pelvises and limbs. It is difficult, however, to tell whether these elements were intentionally selected for inclusion in the cave, as they are generally more visible than the other parts of the body. Since most skulls were fragmentary and required further laboratory procedures to recover, the minimum number of (human) individuals (MNI) was established using the most frequent postcranial elements, based on their categories and sides. The number of individual specimens (NISP) for human remains in the upper cave is 526, while the MNI is 34, as represented by right innominate bones.

In terms of the animal remains, Caprinae were the most abundant, with Equidae, Bovinae and Felidae also present. Most of the animal remains were discovered in branch SG2. Limb elements of some animals in SG2 were articulated, and soft tissues and skins were preserved. At least three vertically overlapping, complete Equidae skeletons were also present in SG2. This suggests that some animal carcasses were transported into the cave without dismemberment. A small number of artefacts were also discovered in the upper cave, intermixed with the animal remains, including bamboo and wooden crafts, as well as fabrics (Figure 5).

There were considerably more human and animal bones in the lower cave than the upper cave, and their spatial distribution was much denser. A pile of human skulls belonging to approximately 10–15 individuals was found in the recesses of the LG1R branch (Figure 4d). Notable traumas were observed on five crania from this assemblage. Further examination, however, is required to determine whether these are antemortem injuries, intentional modifications, or the results of postmortem damage. The NISP for human remains from the lower cave is 218 and the MNI is 26, as represented by left femora.

Most of the animal bones were crania, and post-cranial elements were rare. This is also probably a result of cultural selection. As with the upper cave, Caprinae remains were the most abundant here. Equidae, Bovinae and Canidae remains were also present, although in much smaller numbers.

Artefacts were less frequently observed in the lower cave than in the upper, and we discovered only the bottom of a wooden bowl and several fragments from unknown wood crafts scattered among the human and faunal remains. These broken fragments have distinct mortise and tenon structures, probably indicating that they are part of coffins.

Our rough estimation of the total NISP and MNI for the human remains from Sding Chung cave are 744 and 60, respectively. We do not, however, know the relationship, if any, between the remains from the upper and lower sections. Therefore, we infer an overall MNI of 54 for human remains, based on the presence of all skeletal elements. As we have only collected approximately half of the visible human remains present, and some skeletons could be covered by rocks and sediment, there may be more than 100 individuals buried in the cave. Similarly, we estimate the MNI for animal remains to be at least 350. Further research into the DNA, sex, age and macroscopic features of human and animal remains, as well as the analysis of artefacts, is ongoing.

To better understand the taphonomy of the site, we excavated a 1 × 1m grid in branch NG1. A cluster of bamboo artefacts was found on the surface of the grid, followed by a 0.2m-deep ash layer, which yielded numerous burnt animal bones, two human bones, one intact bronze goblet, one bamboo cup, ceramic sherds, wooden sticks, and debris from metal artefacts (Figure 5: 2–3 & 6).

We obtained 12 samples for radiocarbon dating from different types of remains, including human and animal bones, bamboo and textiles. The samples were collected from three branches in the upper section and one in the lower section. The dates from these different branch caves are surprisingly consistent, suggesting that the cave was used continuously for approximately 600 years, between 300 BC and AD 300 (Figure 6).

Several prehistoric burials have been discovered in the western Himalayas in the past few decades (Aldenderfer Reference Aldenderfer2013). Most, however, are artificial cave or shaft tombs located close to settlements, except for those in the Mustang region in Nepal. As Sding Chung cave is at a significantly higher altitude than most known archaeological sites on the Plateau, we speculate that, as part of the diverse burial rituals in western Tibet, ancient people living in the lowland regions brought the deceased to this high, hidden cave. Ongoing bioarchaeological analyses and further archaeological excavations will continue to enhance our understanding of early society in the western Himalayan region.

Many thanks to three cave explorers, Deyuan Wang, Kaiqi Zhang and Zhiqing Li, as well as Xiawu Kaxian, Feng Yang, Min Li and Zhuo Wu, for their support in the field. Thanks also to Xinzhou Chen and Mark Aldenderfer for their helpful edits and comments.

This project was funded by the National Culture Heritage Administration of China and the Chinese National Social Science Foundation (21@WTK002).

Figure 1. The location of the Sding Chung site (map by Z. Li).

Figure 2. The landscape of Sding Chung (photograph by F. Deng).

Figure 4. a) View from the tunnel of the upper cave; b) the shaft tunnel; c) scattered skeletons in LG1R; d) piled human skulls in LG1R (photographs by H. Lu & Z. Li).