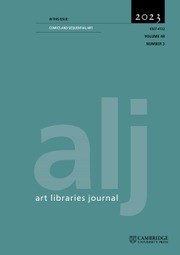 The disorder of things: the postmodern art library

Postmodernism has stimulated a ‘new art history’, which challenged, and then displaced, the highly selective canon of the ‘Old Masters’ and ‘Modern art’ with a broader approach, recognising a wider range of art and interested in investigating both the contexts of art, and the nature of art history itself. The new art history is represented on the shelves of art libraries, but a ‘new art librarianship’ must do more than passively reflect this cultural shift. A new art librarianship will expect of art librarians that they should be aware of the ways in which art libraries legitimise certain books and artworks, thus reinforcing the hegemony of the dominant culture, and that they should be prepared to use the power of art libraries knowingly and productively. Instead of imposing order through inflexible classification schemes, the new art librarianship will embrace the ‘disorder’ of a vast complex of knowledge seen from multiple viewpoints, accommodated by hypertext, for example. It is possible that electronic networking will eventually liberate information from the custody of libraries; the new art librarianship will not resist this, but will in parallel with such developments re-value art books, and books as art, as historical artefacts, reviving a more museum-like function from the history of librarianship, while continuing to serve as a manifest symbol of the wealth of human knowledge.

5. See also Walsh, Kevin. The representation of the past: museums and heritage in the post-modem world. London: Routledge, 1992, p. 148–159.CrossRefGoogle Scholar

7. Johnson, Barbara. Cited in: Cuddon, J. A. A dictionary of literary terms and literary theory. 3rd rev. ed. Oxford: Basil Blackwell, 1991, p.222 Google Scholar. The situation is further confused by the much quoted statement by Jacques Derrida ‘Il n’y a pas de hors-texte’ translated as ‘there is nothing outside the text’. It has recently been painted proudly on the window of the highstreet bookshop Waterstones in Charing Cross Road, London. Is this the victory for deconstruction or merely the latest slogan to sell books?

17. Gregory L. Ulmer has characterised this in the phrase ‘copyright now means the right to copy’. Ulmer. Op cit., p.96.

24. Foucault, Michel. The order of things: an archaeology of the human sciences. London: Tavistock, 1970, p.xv.Google Scholar

25. ‘Institutional legitimation imposes a grid of the permissible upon the field of the possible.’ Burgin, Victor. The end of art theory: criticism and postmodernity. London: Macmillan, 1986, p.158.CrossRefGoogle Scholar

33. Bentham, Jeremy. Panopticon, or, the inspection-house: containing the idea of a new principle of construction applicable to a sort of establishment, in which persons of any description are to be kept under inspection: and in particular to penitentiary-houses, prisons, houses of industry … and schools: with a plan of management adapted to the principle: in a series of letters, written in the year 1787. London: Reprinted and sold by T. Payne, 1791.

37. Foucault, 1970. Op cit., p.132. As a brief but revealing aside, the librarian’s love affair with statistics can be found at the roots of both the modern library movement and of institutionalized statistics. In 1848 Edward Edward published his Remarks on the paucity of libraries freely open to the public, in the British Empire; together with a succinct statistical view of the existing provision of Public Libraries in the several states of Europe, a paper first delivered to the Statistical Society (founded in 1834) [Thompson. Op cit., p.75], (For an account of the uncertain beginnings of the institutionalized discourse of statistics see Poovey, Mary. Figures of arithmetic, figures of speech: the discourse of statistics in the 1830s. Critical Inquiry. 19, Winter 1993, p.256-276.) It would be nice to consign statistics permanently to this modernist period but a feature of postmodernism is the requirement for ever more detailed and accurate management information.

38. Guild, Reuban A. The librarian’s manual: a treatise on bibiography, comprising a select and descriptive list of bibliographical works; to which are added, sketches of publick libraries. New York: Charles B. Norton, 1858, p.41.Google Scholar

41. Derrida, Jacques. Of grammatology. Baltimore: John Hopkins, 1976, p.86–87 Google Scholar. Hypertext also stretches traditional forms of cataloguing based as they are authors, places of publication, and distinct measurable objects. How do you catalogue a disc with 1000 books on it let alone index an on-line docuverse?

49. Conner, Patrick W. Hypertext in the last days of the book. Bulletin of the John Rylands University Library of Manchester. 74 (3), Autumn 1992, p.7–24.CrossRefGoogle Scholar

52. Dyer, Alan and Milner, Kate. An examination of hypertext as an authoring tool in art and design education. In: Miall, David S. Humanities and the computer: new directions. Oxford: Clarendon Press, 1990, p.137.Google Scholar

53. In this respect see: Yates, Francis A. The art of memory. Harmondsworth: Penguin, 1969.Google Scholar

57. ‘Bibliography is the discipline that studies texts as recorded forms, and the processes of their transmission, including their production and reception’. McKenzie, D. F. Bibliography and the sociology of texts. London: British Library, 1986, p.4. (Panizzi Lectures, 1985).Google Scholar

60. This is explored in: Kernon, Alvin. Printing technology, letters and Samuel Johnson. Princeton: Princeton University Press, 1987 Google Scholar.; Chartier, Roger. The cultural uses of print in early modern France. Princeton: Princeton University Press, 1987 Google Scholar; and Eisenstein, Elizabeth L. The printing press as an agent of change: communication and cultural transformations in early-modern Europe. Cambridge: Cambridge University Press, 1980 CrossRefGoogle Scholar. From their work it is apparent that these changes and transitions do not take place over-night. According to Kernan it was not until about 1700 that print technology transformed ‘the most advanced countries of Europe from oral to print societies, re-ordering the entire social world, and restructuring rather than merely modifying letters’ [Kernan. Op cit., p.9]. Landow thinks that one of the lessons that can be learnt from the work of those looking at historical changes within reading practice, information technology, and culture is that all these changes have political contexts and effects. [Landow, Op cit., p.32].

66. ‘In the sixth edition of Edward Phillips’s New World of Words: Or, Universal English Dictionary (1706) “museum” is defined as a “Study or Library; also a College, of Publick Place for the Resort of Learned Men”’ Ibid, p.89.

69. Findlen, Paula. The museum: its classical etymology and Renaissance genealogy. Journal of the history of collections. 1(1), 1989, p.59.CrossRefGoogle Scholar

76. Durance, Cynthia J. and Taylor, Hugh A.. Wisdom, knowledge, information and data: transformation and convergence in archives and libraries of the Western World. Alexandria. 4 (1), 1992, p.43.CrossRefGoogle Scholar

78. The Order of the General Benedictine Chapter. Cited in: Thompson. Op cit., p.53.

80. In the use of this term I include all types of print and manuscript documents.

92. This was because it ‘was an era when transformations in spatial and temporal practices implied a loss of identity with place and repeated radical breaks with any sense of historical continuity.’ Harvey. Op cit., p.272.

93. Kernan Op cit., p.4-5. Kernan speaks of the ‘library effect’ and the tension and contradiction relating to the primary forces of print logic, multiplicity and fixity, described as ‘the remainder house’ and the ‘library effect’ [Kernan. Op cit., p.55 and in Landow. Op cit., p.32.] The question of which aspect is dominant at a given time depends on the specific economic, political, and technological conditions. What I take this to mean is that the logic of printed books leads towards a multiplicity of material, an excess, and at the same time a conservation, a filling up. The library attempts to fix and freeze a prolific book culture which continues, however, to multiply and subvert this fixation. This was excellently phrased by Foucault as a double fascination placed upon the library ‘by the sumptuous spectacle of its past and the limitless acquisitions of its future’. [Foucault, 1977. Op cit., p.103.]

98. An illustration of something similar can be found in Cotton. Op cit., p.120.

The disorder of things: the postmodern art library
×

The disorder of things: the postmodern art library
×

The disorder of things: the postmodern art library
×
×