Published on behalf of The Center for Austrian Studies, University of Minnesota
Journal Home 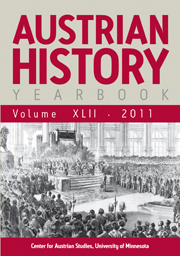