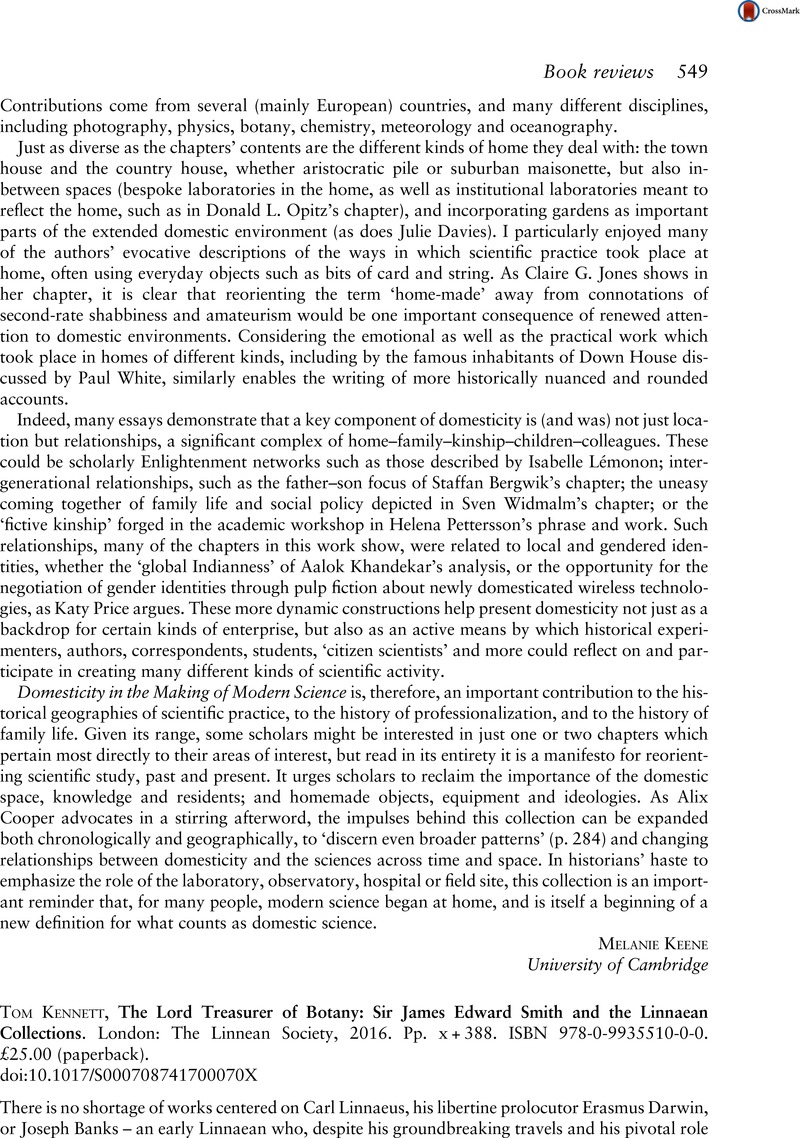 An abstract is not available for this content so a preview has been provided. To view the full text please use the links above to select your preferred format.
Type
Book Review
Information
The British Journal for the History of Science , Volume 50 , Special Issue 3: Reproduction on Film , September 2017 , pp. 549 - 551
DOI: https://doi.org/10.1017/S000708741700070X[Opens in a new window]
Copyright
Copyright © British Society for the History of Science 2017

There is no shortage of works centered on Carl Linnaeus, his libertine prolocutor Erasmus Darwin, or Joseph Banks – an early Linnaean who, despite his groundbreaking travels and his pivotal role in superintending transfers of knowledge and naturalia, published little of consequence. How strange, then, that James Edward Smith – prolific botanical author, founder of the distinguished Linnean Society, custodian of one of the most remarkable collections in the history of biology, and one of the figures chiefly responsible for Linnaeus's renown in Britain – should be so neglected by comparison. Enter Tom Kennett's The Lord Treasurer of Botany: Sir James Edward Smith and the Linnaean Collections, which rectifies this anomaly with a useful and interesting chronicle of Smith's life and scientific contributions.

Born into a well-to-do Norwich Unitarian family, Smith first acquired a fascination for plants from his mother. This interest he pursued in botanical reading and collecting as a teenager, and refined under the mentorship of Hugh Rose, a fellow Norwicher and early translator of Linnaeus. Barred from Cambridge and Oxford owing to his dissenting faith, he pursued medicine at the University of Edinburgh – medicine being the only means of undertaking university-level botanical studies. Edinburgh enabled Smith to study Linnaean taxonomy under John Hope, help found the Edinburgh Natural History Society, and undertake an organized collecting expedition – activities which brought him to Banks's notice. It was through the latter that Smith arranged to purchase the magnificent collections of Linnaeus – including his library, herbarium, manuscripts, shells, fossils, insects, corals and minerals – around which he established the Linnean Society a few years later. Such a coup was not uncontroversial: Swedish interests lobbied to keep the collections in Uppsala, and Britons occasionally chafed at the idea of a scientific society named after a foreigner. But these controversies paled beside the society's importance as a lifeline for natural historians ill served by the Royal Society. They also did nothing to stymie Smith's own prodigious output in the form of botanical manuals, travel narratives, translated works of Linnaeus, pamphlets, scholarly articles, lectures and, most notably, an opulent series of floras embellished with plates illustrated by the well-known natural-history artist James Sowerby. Smith is often dismissed as an interloper who simply ‘“purchas[ed]” his way into the scientific community’ (p. 308); this book aptly renders such a view untenable.

Monetary considerations dictated that Smith address much of his work to a popular audience, especially wealthy female patrons. In so doing, it was necessary to distance himself from more prurient interpretations of the Linnaean sexual system, a difficulty he surmounted by drawing attention to botany's spiritually edifying character. With the ascendency of the natural system, which classified plants according to a much more diverse number of characteristics, Smith found himself defending Linnaeus on another front entirely. Sparring with critics in the natural-system camp could be downright vicious, as evidenced by Smith's ongoing disputes with Michel Adanson and Jean-Baptiste Lamarck in Paris, and with Richard Salisbury much closer to home. Other tensions, such as those with the popular botanical writer William Curtis, and even Banks, had more to do with vocational jealousy. Smith's views occasionally got him into trouble. His pro-revolutionary sympathies, for instance, cost him a prestigious engagement as private tutor to Queen Charlotte, and Cambridge would ultimately deny him a botany professorship on religious grounds. It was from books, lectures and his inheritance that Smith made ends meet, then, despite being (following Banks's death in 1820) the foremost botanist in Britain, and the first individual to receive a knighthood for his scientific accomplishments.

Kennett's survey hews meticulously to its protagonist's correspondence and published writings, which is appropriate for a first modern, full-scale biography of a major historical figure. On the other hand, trained historians will likely notice a lack of engagement with pertinent scholarly debates. There is little discussion of Smith's relation to questions of empire, for instance, despite the fact that he corresponded with several colonial botanists; authored a volume entitled Exotic Botany, together with some of the earliest natural histories on Australia; and opposed the ‘barbarous name’ of Gingko biloba, among other things (p. 251). More might have also been said to contextualize Smith's beliefs respecting the ‘sanctity of natural history’, considering his apparent affinity for the secularist Jacobins (p. 72). And although his wife's posthumous destruction of the family correspondence makes it difficult to speculate on the character of Smith's – apparently heartfelt – attachments to other men, scholars of gender and sexuality will probably be disappointed with Kennett's seemingly casual pronouncement that ‘Smith's sense of morality rules out anything but the most platonic, though intense, of relationships’ (p. 45).

These foibles do not, of course, detract from the book's many strengths. For one thing, it ties in with a growing body of scholarship concerning the difficulties involved in establishing a paying scientific career in the nineteenth century, and the cultivation of non-expert readerships this often necessitated. Like any good biography, it likewise succeeds at illuminating not only Smith's life but also the lives of his inner circle, including lesser-known individuals like the Swiss English botanist Edmund Davall, and Mary Watson-Wentworth, Marchioness of Rockingham, an important botanical patron. Kennett sheds a similarly intriguing light on Norwich itself, which, we learn, developed into a centre of textile manufactures, religious Nonconformity, radicalist politics, horticulture and natural history owing largely to a sixteenth-century influx of Protestant refugees from the Spanish Netherlands. As befits its subject matter, The Lord Treasurer of Botany is also a beautifully crafted volume, complete with numerous illustrations and coloured plates. These factors combine to make a biography that historians of popular science will probably reckon useful, and that scholars of eighteenth- and nineteenth-century botany and natural history will no doubt regard as indispensable and overdue.