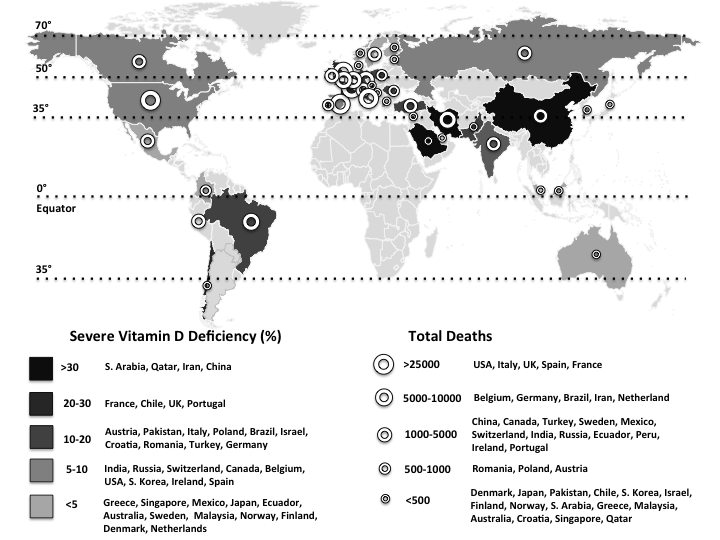 This is an Open Access article, distributed under the terms of the Creative Commons Attribution licence (http://creativecommons.org/licenses/by/4.0/), which permits unrestricted re-use, distribution, and reproduction in any medium, provided the original work is properly cited.
Copyright
© The Authors 2020. Published by Cambridge University Press

On 11 March 2020, the WHO announced the novel coronavirus disease (COVID-19) outbreak to be a global pandemic(1). The spread of COVID-19 is becoming unstoppable, and as of 15 May, more than 4 500 000 people have been infected and more than 300 000 people have died (Fig. 1)(1). The severe acute respiratory syndrome coronavirus 2 (SARS-Cov-2) is the pathogen of COVID-19. SARS-CoV-2, classified into two β coronaviruses, is an enveloped, positive-sense and single-stranded RNA virus of about 30 kb. The life cycle of the virus with the host comprises mainly five steps as follows: attachment, penetration, biosynthesis, maturation and release. Once SARS-CoV-2 attaches to the host receptors, it penetrates the cells via endocytosis/membrane fusion. Herein, angiotensin-converting enzyme 2 is the entry and functional receptor of SARS-CoV-2. It has been shown that the spike for SARS-CoV-2, structural membrane proteins formed by the trans-membrane trimetric glycoprotein protruding from the viral surface, also binds to angiotensin-converting enzyme 2. After the viral contents are released inside the host cells, viral RNA enters the nucleus to replicate. As for the biosynthesis, viral mRNA is used to make viral proteins. The new viral particles are formed in the maturation step and then released(Reference Yuki, Fujiogi and Koutsogiannaki2).

Angiotensin-converting enzyme 2 plays an important role for the interaction between the classical and non-classical pathway of the renin angiotensin system. The former acts through the angiotensin II type 1 receptors, and its increased activity leads to fibrosis, inflammation and angiogenesis. The latter acts through the Mas receptors and has opposing effects to the angiotensin II type 1 receptors(Reference Vaduganathan, Vardeny and Michel3). Angiotensin-converting enzyme 2 is expressed by the epithelial cells of lungs, intestines, kidneys and blood vessels; therefore, the aforementioned tissues/organs are vulnerable to SARS-CoV-2 infection(Reference Zou, Chen and Zou4). Additionally, activation of the renin angiotensin system is significantly associated with increased morbidity and mortality as in hypertension(Reference Vaduganathan, Vardeny and Michel3). * The most commonly infected countries and regions with COVID-19 in descending order. Fig. 2. The histogram shows the prevalence of vitamin D deficiency (<50 nmol/l) and severe deficiency (<25 nmol/l) among the forty countries most commonly affected by COVID-19. The number above each column represents the country’s position in the world ranking concerning the number of total cases of infections. The colour band is a graphical representation of the four main climatic areas in the world. Regression lines show the prevalence of overall (solid black line) and severe (dotted line) vitamin D deficiencies. (

The risks for vitamin D deficiency encompass obesity, elderly, lack of proper sun (UV-B) exposure, dark skin, smoking, living with air pollution and the presence of co-morbid diseases such as infection, cancer, CVD, chronic respiratory disease, osteoporosis, sarcopenia and diabetes mellitus(Reference Schleicher, Sternberg and Looker46,Reference Grant, Lahore and McDonnell47) . Further, it is known that severe vitamin D deficiency dramatically increases the risk of mortality, infections and many other diseases. As such, it should indisputably be prevented whenever detected/possible(Reference Schleicher, Sternberg and Looker46).

Vitamin D hormone has important functions – including immunomodulant, anti-inflammatory and anti-infective roles(Reference Grant, Lahore and McDonnell47). It acts via monocyte and cell-mediated immunity stimulation, suppression of lymphocyte proliferation, antibody production and cytokine synthesis(Reference Beard, Bearden and Striker48). Human lung cells are able to intracellularly convert the inactive 25(OH)D to its active form 1,25(OH)D which reduces proinflammatory cytokines and increases peptides (e.g. the innate antimicrobial peptide cathelicidin)(Reference Beard, Bearden and Striker48). Cathelicidin has direct antiviral activity against enveloped respiratory viruses such as hepatitis B, influenza, respiratory syncytial virus and possibly the COVID-19 as well(Reference Beard, Bearden and Striker48). Other than the above-mentioned functions, vitamin D has also anti-fibrotic effects. The renin-inhibiting activity and down-regulation of the renin angiotensin system activity seem to be the beneficial effects of vitamin D. Moreover, vitamin D has been shown to suppress angiotensinogen and regulate its expression(Reference Feldman, Pike and Bouillon49).

The distribution of community outbreaks shows seasonal patterns along certain latitude, temperature and humidity, that is, similar to the behaviour of seasonal viral respiratory tract infections. It has been reported that COVID-19 displays significant spread in mid-latitude (35–50° N′) regions and/or in those with an average temperature of 5–11°C and low humidity (Fig. 1)(1,Reference Sajadi, Habibzadeh and Vintzileos50) . Coronaviruses are very stable at 4°C (viable for up to 3 d) and can survive at −20°C (for up to 2 years)(1). Depending on some parameters (e.g. temperature, humidity and sunlight), they can live on different surfaces for a few days. They are thermolabile; decreased sunlight, low temperatures and less humidity seem to be favourable for COVID-19(1). Although natural UV (UV-C) from the sunlight may not be strong enough to kill COVID-19, its antimicrobial efficacy has long been shown to inactivate, thus preventing the transmission of airborne-mediated infections such as influenza and tuberculosis(Reference Welch, Buonanno and Grilj51). Further, UV-B from the sun can induce endogenous synthesis of vitamin D in the skin – being the main source of vitamin D other than the dietary intake or supplementation. These factors might possibly be explanatory as regards the low prevalence of COVID-19 in subtropical and southern countries.

Patients infected with COVID-19 have higher mortality rates if they are older, that is, 8·0 % (70–79 years) and 14·8 % (>80 years). The similar rates for co-morbid conditions are as 10·5 % (CVD), 7·3 % (diabetes mellitus), 6·3 % (chronic respiratory disease), 6·0 % (hypertension) and 5·6 % (cancer)(52). Older adults with any of these co-morbid diseases are at high risk for COVID-19 infection – especially in the presence of severe vitamin D deficiency(Reference Alipio53). To this end, since there is positive/strong evidence concerning the effects of vitamin D against viral respiratory infections, it would not be unsound to say that vitamin D supplementation may decrease viral induction and inflammatory genes, and incidence/severity of respiratory tract infections(Reference Beard, Bearden and Striker48). In this sense, a meta-analysis of twenty-five randomised controlled trials showed that vitamin D supplementation has a preventive effect against acute respiratory tract infections and that the benefit is higher in those subjects receiving daily or weekly vitamin D without additional bolus doses, and in those having severe vitamin D deficiency at baseline(Reference Martineau, Jolliffe and Hooper54).

Although vitamin D was primarily recognised for bone metabolism, increasing evidence indicates its proper function for nearly every tissue in the body including brain, heart, lung, muscle, immune system and skin(Reference Mostafa and Hegazy55). Therefore, the treatment of vitamin D deficiency would be vital for several diseases including cardiovascular and neurological disorders, cancers, autoimmune diseases and infections as well(Reference Mostafa and Hegazy55). Likewise, a recent review recommended that in people at risk of influenza/COVID-19 infection, 250 μg/d of vitamin D3 for a few weeks (or a month),that is, to rapidly increase the 25(OH)D concentrations and then 125 μg/d in the follow-up can be considered(Reference Grant, Lahore and McDonnell47). The target should be to raise its value above 40–60 ng/ml. Additionally, the authors also suggested higher vitamin D3 doses for infected patients with COVID-19. For sure, attention should be paid not to take high calcium supplementation for potential risk of hypercalcaemia while taking high doses of vitamin D3. Needless to say, as vitamin D is synthesised mainly in the skin, sun (UV-B) exposure (15–20 min daily) inducing the light pink colour of minimal erythema would be the natural way of production and activation of vitamin D by keratinocytes(Reference Mostafa and Hegazy55).

Accordingly, presenting this paper, we would like to call attention to the possible association between severe vitamin D deficiency and mortality pertaining to COVID-19. Given its rare side effects and relatively wide safety, prophylactic vitamin D supplementation and/or food fortification might reasonably serve as a very convenient and incomparable/invaluable adjuvant therapy for these two worldwide public health problems alike.

The authors report no conflicts of interest.