A Quarterly Journal Devoted to Engaging a World Community of Bioethicists 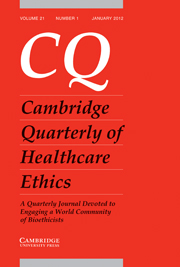