Background: An increased incidence of hospital admissions coded as acute disseminated encephalomyelitis (ADEM) was noted in Winnipeg, Manitoba, Canada, during the second wave of the influenza pandemic from October 2009 to March 2010. However, it was not clear whether this was due to heightened awareness of potential neurological complications of influenza or influenza vaccination or an actual increase in the number of cases. Methods: We extracted data from the charts of 139 patients hospitalized with an International Classification of Diseases-10 discharge code indicating ADEM (G04.0) or unspecified noninfectious encephalitis or myelitis (G04.8, G04.9) between January 2006 and December 2012. Clinical and laboratory data were reviewed by a neurologist, and diagnoses were determined using the Brighton criteria. Results: Over the entire study period, there were 22 cases of ADEM. During the peak pandemic period (April-December 2009), seven patients were hospitalized with ADEM, corresponding to a rate of 7.8/million/year; 4.7 (95% confidence interval: 1.9-11.4) times higher than the rate before or after the pandemic period. Only one patient with ADEM had received the monovalent A(H1N1)pdm09 vaccine within 12 weeks of hospitalization. Conclusions: We have found an increased incidence of ADEM during the pandemic period that may be related, at least in part, to the increased incidence of influenza during that period. However, there was no temporal relationship with the administration of A(H1N1)pdm09 or seasonal influenza vaccines. Our study provides reassurance that use of these vaccines was not associated with increased risk of ADEM.

Influenza A viruses infect a variety of mammals and avian species. Genetic reassortant viruses can cause epidemics that may spread rapidly and widely enough to be classified as a pandemic. The 1918 influenza A/H1N1 pandemic was responsible for about 40 million deathsReference Patterson and Pyle 1 and was associated with unique neurologic syndromes, including encephalitis lethargica and postencephalitic parkinsonism.Reference Davis, Koster and Cawthon 2 By comparison, the 2009 pandemic, caused by a novel influenza A/H1N1 virus—A(H1N1)pdm09—had a milder course but was still associated with significant mortality and morbidity across the globe.Reference Trifonov, Khiabanian and Rabadan 3

Many cases of central nervous system demyelination and encephalomyelitis have been reported to be due to influenza A infection or after influenza vaccination.Reference Shoamanesh and Traboulsee 4 - Reference Cardenas, Soto-Hernandez and Diaz-Alba 7 Although there are many case reports, there is uncertainty about the exact risk of neurological complications as a consequence of influenza vaccination. Postmarketing surveillance showed an increased incidence of hospital admissions coded as acute disseminated encephalomyelitis (ADEM) in Winnipeg, the capital and largest urban center in the Canadian province of Manitoba during the second wave of the pandemic. During the 6-month period from October 2009 to March 2010, ten hospitalizations were coded as ADEM, whereas only about one or two were expected based on the literature. We conducted a public health investigation to confirm the presence of the signal and to explore possible links to the administration of the A(H1N1)pdm09 or seasonal influenza vaccines used during the pandemic.

We used the Hospital Abstracts Database of Manitoba Health to identify all patients who were admitted to Winnipeg hospitals with an International Classification of Diseases-10 code indicating ADEM (G04.0) or unspecified noninfectious encephalitis or myelitis (G04.8, G04.9) between January 2006 and December 2012 (about 3 years before and after the pandemic period). Manitoba Health is a publicly funded agency that provides comprehensive health insurance, including hospital and vaccination services, to the province’s 1.2 million residents. Coverage is universal, without regard to age or income, and participation rates are very high.

An experienced nurse-auditor extracted relevant clinical and laboratory information from the charts of 141 patients using a standard form developed by the Brighton Collaboration.Reference Sejvar, Kohl and Bilynsky 5 Two charts were excluded because of insufficient information. An experienced neurologist (ACJ) reviewed the data, without knowledge of patient vaccination status, and used the Brighton criteriaReference Sejvar, Kohl and Bilynsky 5 to classify cases into ADEM (Table 1) or “other diagnosis.” We obtained information on all vaccines received by participants up to 3 years before the index admission date from the Manitoba Immunization Monitoring System, a population-based province-wide registry of all vaccines administered in Manitoba residents since 1988.Reference Roberts, Poffenroth, Roos, Bebchuk and Carter 8 This information was needed because the clinical charts may not include accurate information on all vaccines received by these patients. 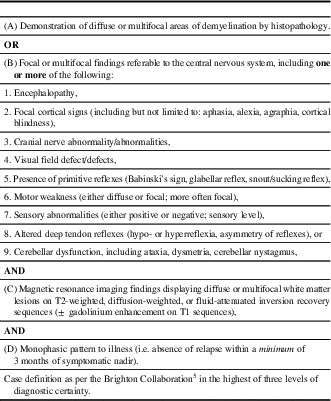 Of the 139 charts reviewed, only 22 (15.8%) cases met the Brighton criteria for ADEM. The remaining were classified as encephalitis/myelitis of unspecified etiology (56), non-ADEM demyelinating (DM) disorder (6), central nervous system infection (24), and other conditions (31) (Table 2). During the pandemic period (April-December 2009), seven patients were hospitalized with ADEM corresponding to a rate of ~7.8/million/year (95% confidence interval [CI]: 3.1-16.0), compared with an average rate of ~1.7/million/year (95% CI: 0.9-2.7) before and after the pandemic. The rate ratio was 4.7 (95% CI: 1.9-11.4; p = 0.005). None of the 7 ADEM patients had a relevant medical history. In particular, none of them tested positive for pandemic or other influenza. Compared with ADEM patients diagnosed outside of the pandemic period, these patients were slightly younger (9 vs 15 years). Otherwise, they had similar presentations, laboratory findings, and outcomes.

Table 2 Diagnoses for the 117 non-ADEM cases 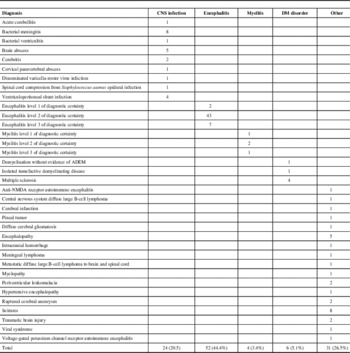 Only one ADEM patient received the A(H1N1)pdm09 vaccine within 12 weeks before hospital admission (Figure 1). This patient developed neurological symptoms 18 days following receiving an adjuvanted A(H1N1)pdm09 vaccine and was hospitalized 25 days after receiving the vaccine. The Canadian-manufactured Arepanrix (GlaxoSmithKline Biologicals), an AS03-adjuvanted monovalent split virion vaccine containing 3.75 µg hemagglutinin per 0.5 mL dose, was the only adjuvanted vaccine used in Manitoba during the immunization campaign that began on October 26, 2009.Reference Mahmud, Hammond and Elliott 9 Three other ADEM patients developed symptoms later than 12 weeks after receiving the same product. Another patient developed non-ADEM encephalitis symptoms 43 days after vaccination. None of the other cases received a pandemic vaccine. Throughout the study period, no patient developed ADEM within 12 weeks of seasonal influenza vaccination.

Although we observed nearly a five-fold increase in ADEM rates during the pandemic period in Manitoba, only one of seven cases (14.3%) occurred within an etiologically plausible interval (12 weeks) of vaccination with the adjuvanted A(H1N1)pdm09 vaccine and none following vaccination with a seasonal influenza vaccine.

The scientific literature on the relationship between ADEM and the monovalent A(H1N1)pdm09 vaccine, and influenza vaccination in general, is quite limited. In China, 89.6 million doses of A(H1N1)pdm09 vaccine were administered between September 2009 and March 2010, and there were only 8067 adverse events (rate of 90.0 per 1 million doses), including only two cases of ADEM and no cases of encephalitis.Reference Liang, Li and Liu 10 A meta-analysis of 18 randomized clinical trials of A(H1N1)pdm09 vaccines showed only three serious vaccine-related adverse events out of 22,826 vaccinated subjects; none was neurological and all resolved with 10 days.Reference Manzoli, De, Salanti, D’Addario, Villari and Ioannidis 11 Similarly, a large surveillance study showed a low rate of adverse events after A(H1N1)pdm09 vaccination in the United States.Reference Vellozzi, Broder and Haber 12 In Japan, a postmarketing study by the Kitasato Institute found only three cases of ADEM following more than 38 million doses of seasonal influenza vaccines administered in Japan between 1994 and 2004.Reference Nakayama and Onoda 13 Although it has been estimated that up to 5% to 20% of ADEM cases occur within 1 month of vaccination,Reference Koelman and Mateen 14 , Reference Leake, Albani and Kao 15 reports of ADEM following influenza vaccination are quite rare.Reference Shoamanesh and Traboulsee 4 , Reference Ussel, Boer, Parizel, Cras and Jorens 6 , Reference Cardenas, Soto-Hernandez and Diaz-Alba 7

The reasons for the higher incidence of ADEM during the pandemic in Winnipeg are not clear, and a role for infection with A(H1N1)pdm09 cannot be ruled out. In a recently published systematic review of large ADEM cohort studies, 67% of ADEM cases had a preceding vaccination or infection.Reference Koelman and Mateen 14 Although cases of A(H1N1)pdm09 infection associated with ADEM have been reported, information on the frequency of this occurrence on a population level is lacking.Reference Wang, Duan, Zhao and Zhang 16 - Reference Garazzino, Gabiano and Calitri 18 A systematic review of all case reports that mentioned neurological complications related to A(H1N1)pdm09 disease found more reports of neurological complications from the infection itself than to vaccination.Reference Cardenas, Soto-Hernandez and Diaz-Alba 7 None of the patients in our study had a laboratory evidence of prior A(H1N1)pdm09 virus infection, but we do know from the literature and from our own A(H1N1)pdm09 seroprevalence studies that laboratory confirmation was available for only a very small percentage of infected patients, possibly <1%.Reference Mahmud, Becker and Keynan 19 , Reference Thompson, Mahmud and Keynan 20

In summary, we have found an increased incidence of ADEM during the pandemic period that may be related, at least in part, to the increased incidence of influenza. However, there was no temporal relationship with the administration of A(H1N1)pdm09 or seasonal influenza vaccines. Our study provides reassurance that use of these vaccines was not associated with increased risk of ADEM and supports the results of previous observational studies indicating that neurological disorders, including ADEM, are fortunately very rare consequences of influenza vaccination.

We thank Elaine McIntyre for her thorough and careful abstraction of the hospital charts.

Supported in part by Manitoba Health. The results and conclusions are those of the authors. No official endorsement by Manitoba Health is intended or should be inferred. SMM was supported by an Establishment grant from the Manitoba Health Research Council; is a Canada Research Chair in Pharmaco-epidemiology and Vaccine Evaluation; and the Great-West Life, London Life, and Canada Life Junior Investigator of the Canadian Cancer Society (Grant No.2011-700644).

Table 2 Diagnoses for the 117 non-ADEM cases