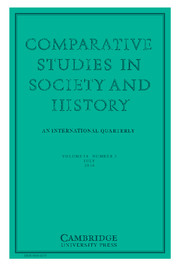 On the cover
Acknowledgments:

The author would like to thank the following people for their helpful comments and support: Ivan Ermakoff, Myra Ferree, Yoshiko Herrera, Viktor Koska, Selena Lazić, Pamela Oliver, Tamara Petrović, Marija Radoman, Ivana Stanojev, Ružica Strelar, Veljko Vujačić, and the CSSH editors and reviewers. All translations from newspaper stories are my own.