An International Journal of Plant Systematics and Biodiversity 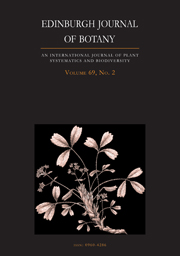