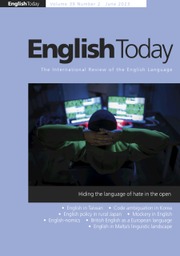 From time to time the media pick up on instances of English language use which do not carry over entirely happily from one variety to another. One of the most well known of these must be the feature – variously known by such labels as ‘high rising terminal’ (HRT), ‘Australian question intonation’ (AQI), or ‘uptalk’ – which sees an upward inflection being introduced to utterances that are not actually questions. Long unremarkable in Australia, and increasingly unremarkable elsewhere in the English-speaking world especially among younger speakers, this feature nevertheless annoys a lot of people who do not use it themselves. For a recent online discussion of this phenomenon in the United States, see http://thesocietypages.org/socimages/2013/12/28/men-and-women-use-uptalk-differently-a-study-of-jeopardy/.

The latest in a catalogue of complaints recorded about uptalk has come as a result of a survey of business leaders carried out by the publishing company Pearson, the findings of which were reported in the Daily Mail and other British newspapers in January this year. Under the headline ‘Want a promotion? Don't speak like an AUSSIE [i.e. an Australian]’, the Mail explains that Pearson surveyed 700 men and women in managerial roles, and more than half said that the trait was a clear indicator of insecurity and would hinder employment prospects. Taking this up the following day, the Guardian newspaper featured a light-hearted debate between an Australian, Alex McClintock, and an Englishwoman, Rae Earl. Among many partisan claims by McClintock was that ‘far from indicating insecurity, some studies suggest that the AQI is often used by powerful people when speaking to their subordinates (thereby explaining why Australians use it when talking to Britons)’. Earl countered with equal spirit, observing that uptalk ‘makes tiny admissions of doubt sound like Pacific-sized adolescent insecurities’.

As well as provoking popular discussion, this one linguistic feature has a long and distinguished history of sociolinguistic analysis of course – one that the interested linguist can very fruitfully explore (see, for example, Barry's The Form, Function and Distribution of High Rising Intonation 2008). But we might remark here on two very fundamental issues that touch on the everyday world. Firstly, it is clear that how we speak leads others to judge us: as G. B. Shaw wrote in his Preface to Pygmalion, ‘It is impossible for an Englishman [for this, probably read ‘any speaker’] to open his mouth without making some other Englishman [i.e. speaker] hate or despise him'. People do not generally hold back from being judgemental about the speech of others, even though they might be careful not to voice prejudices based on, for example, gender, race, or religion. Secondly, as some other recent English Today editorials make clear, the media never tire of discussing English. Those of us who teach or research the language can expect a ready audience for what we have to say, making it essential that we ensure our facts are correct and our opinions objective.

Our individual speech styles, uptalk or not, send signals about our social identity, a theme explored in Braber's questioning of the existence of a linguistic ‘North/South divide’ in England in this issue. Also concerning England, but with an historical dimension, is Trotter's examination of the French element in place-names. Two articles, by Xie and Tanghe, discuss World Englishes in the classroom, in China and South Korea respectively, Isingoma contributes to the description of Ugandan English, and reviews by Cowie and Van Hattum continue the World Englishes theme. A further review, by Syea, looks at a recent publication on creoles. David-West and Suh, like Tanghe focusing on South Korea, interview a tutor with particular EFL expertise there, and we hope to publish more such interviews in future. Torres-Martínez offers an approach to teaching corpus-aided conversational grammar in an EFL context. Problems surrounding ELT in Bangladesh concern Ali and Walker, and Straaijer invites readers' feedback on a number of core questions on prescriptivism posed by the Leiden ‘Bridging the Unbridgeable’ project.

The editorial policy of English Today is to provide a focus or forum for all sorts of news and opinion from around the world. The points of view of individual writers are as a consequence their own, and do not reflect the opinion of the editorial board. In addition, wherever feasible, ET generally leaves unchanged the orthography (normally British or American) and the usage of individual contributors, although the editorial style of the journal itself is that of Cambridge University Press.

The editorial policy of English Today is to provide a focus or forum for all sorts of news and opinion from around the world. The points of view of individual writers are as a consequence their own, and do not reflect the opinion of the editorial board. In addition, wherever feasible, ET generally leaves unchanged the orthography (normally British or American) and the usage of individual contributors, although the editorial style of the journal itself is that of Cambridge University Press.