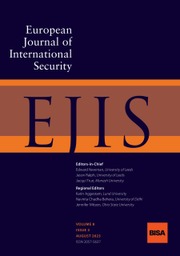 Detecting the need for change: How the British Army adapted to warfare on the Western Front and in the Southern Cameroons

This article addresses a gap in the literature on military adaptation by focusing on the first step in the adaptive process: detecting failure. We argue that institutionalised feedback loops are a critical mechanism for facilitating detection. Feedback loops are most effective when they filter information and distribute lessons learned to senior tactical commanders. In turn, effective filtration depends on incorporating frontline soldiers and specialists into intelligence cells while creating a protected space for dissent. We evaluate our theory against both irregular and conventional wars fought by the British Army: the counterinsurgency campaign in the Southern Cameroons (1960–1) as well as the evolution of British assault tactics on the Western Front of the First World War (1914–18).

3 Harkness, Kristen A. and Hunzeker, Michael A., ‘Military maladaptation: Counterinsurgency and the politics of failure’, Journal of Strategic Studies, 38:6 (2015), pp. 777–800CrossRefGoogle Scholar.

9 Farrell, Theo, ‘Improving in war: Military adaptation and the British in Helmand Province, Afghanistan, 2006–2009’, Journal of Strategic Studies, 33:4 (2010), pp. 567–94CrossRefGoogle Scholar. In a subsequent analysis of this campaign, Farrell sheds light on how Taliban units adapted in response to British adaptations, and explores how the two sides unexpectedly converged in both operational focus and organisational form. See Farrell, Theo and Giustozzi, Antonio, ‘The Taliban at war: Inside the Helmand insurgency, 2004–2011’, International Affairs, 89:4 (2013), pp. 845–71CrossRefGoogle Scholar; and Theo Farrell, ‘Military adaptation and organisational convergence in war: Insurgents and international forces in Afghanistan’, Journal of Strategic Studies, available at: {doi: 10.1080/01402390.2020.1768371}.

10 Marcus, Raphael, ‘Military innovation and tactical adaptation in the Israel–Hezbollah Conflict: The institutionalization of lesson-learning in the IDF’, Journal of Strategic Studies, 38:4 (2015), pp. 500–28CrossRefGoogle Scholar.

16 For a deeper discussion of the important role that top-level leaders play in facilitating change, see Rosen, Winning the Next War, pp. 20–2. For an introduction to horizontal learning, see Foley, Robert T., ‘A case study in horizontal military innovation: The German Army, 1916–1918’, Journal of Strategic Studies, 35:6 (2012), pp. 803–04Google Scholar. For an overarching discussion of different learning pathways, see Fox, Learning to Fight, pp. 53–72.

33 The first British Special Branch units were formed in the late nineteenth century in response to the Irish Republican Brotherhood. They evolved to play a major role in colonial policing across the British Empire.

48 Sheffield suggests that the ‘real fault-line’ was between ‘total warriors’ and those who saw Britain's role in the conflict as limited, and not Easterners versus Westerners as it is usually described. Sheffield, Forgotten Victory, p. 117.

60 Williamson Murray suggests that the British high command struggled to incorporate the combat experiences of frontline combat units into its training programs for new recruits because of ‘the general absence of a lessons-learned process that would have ensured that training in Britain remained in touch with what was happening in France’. See Murray, Military Adaptation in War, pp. 94–5.

65 In contrast, planning to mobilise a mass army for continental warfare was the German General Staff's raison d'etre.

75 Certainly, strategic and operational factors were not responsible for this outcome. Although Britain's war aims had expanded since the start of the war, the BEF's strategic objectives remained largely consistent. Operationally, BEF commanders continued to organise its offensives around its artillery firepower. In fact, the pre-assault bombardments of 1917 would prove to be some of the largest of the war. Before the Battles of Messines, British artillery units fired three million shells per week (Wynne, If Germany Attacks, pp. 299). Two months later the BEF used 3,168 guns to fire 4.3 million shells over 13 days at Passchendaele. See Zabecki, David T., The German 1918 Offensives: A Case Study in the Operational Level of War (kindle edn, New York, NY: Routledge, 2006)CrossRefGoogle Scholar, loc. 1473.

76 Robbins, British Generalship on the Western Front, pp. 94–5. According to Beach, before Training Branch, ‘the production of doctrine seems to have been just another task for the busy operations staff at GHQ. It would appear that they assigned a writer or simply convened committees on an ad hoc basis whenever a doctrinal need was identified’. See Beach, Jim, ‘Issued by the General Staff: Doctrine writing at British GHQ, 1917–1918’, War in History, 19:4 (2012), pp. 464–91CrossRefGoogle Scholar (p. 490).

77 Beach suggests that by 1918, Training Branch made significant strides towards harmonising and codifying doctrine within the BEF (‘Issued by the General Staff’, pp. 464–91). In contrast, Sheffield maintains that the BEF's doctrine remained informal throughout the war. See Sheffield, Gary, ‘British High Command in the First World War: An overview’, in Sheffield, Gary and Till, Geoffrey (eds), The Challenges of High Command: The British Experience (London: Palgrave Macmillan, 2003), pp. 15–25CrossRefGoogle Scholar.

82 JSCSCA Z394, General Staff, ‘SS 143, The Organization of an Infantry Battalion and the Normal Formation for the Attack’, April 1917.

Detecting the need for change: How the British Army adapted to warfare on the Western Front and in the Southern Cameroons
×

Detecting the need for change: How the British Army adapted to warfare on the Western Front and in the Southern Cameroons
×

Detecting the need for change: How the British Army adapted to warfare on the Western Front and in the Southern Cameroons
×
×