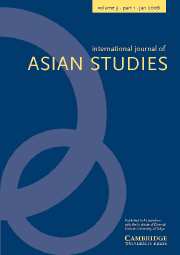 CONCEPT OF THE BORDER: NATIONS, PEOPLES AND FRONTIERS IN ASIAN HISTORY (2)

LAW, STATE AND SOCIETY IN CHINA [4]