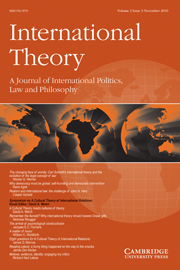 Symposium on A Cultural Theory of International Relations: Guest Editor: David A. Welch