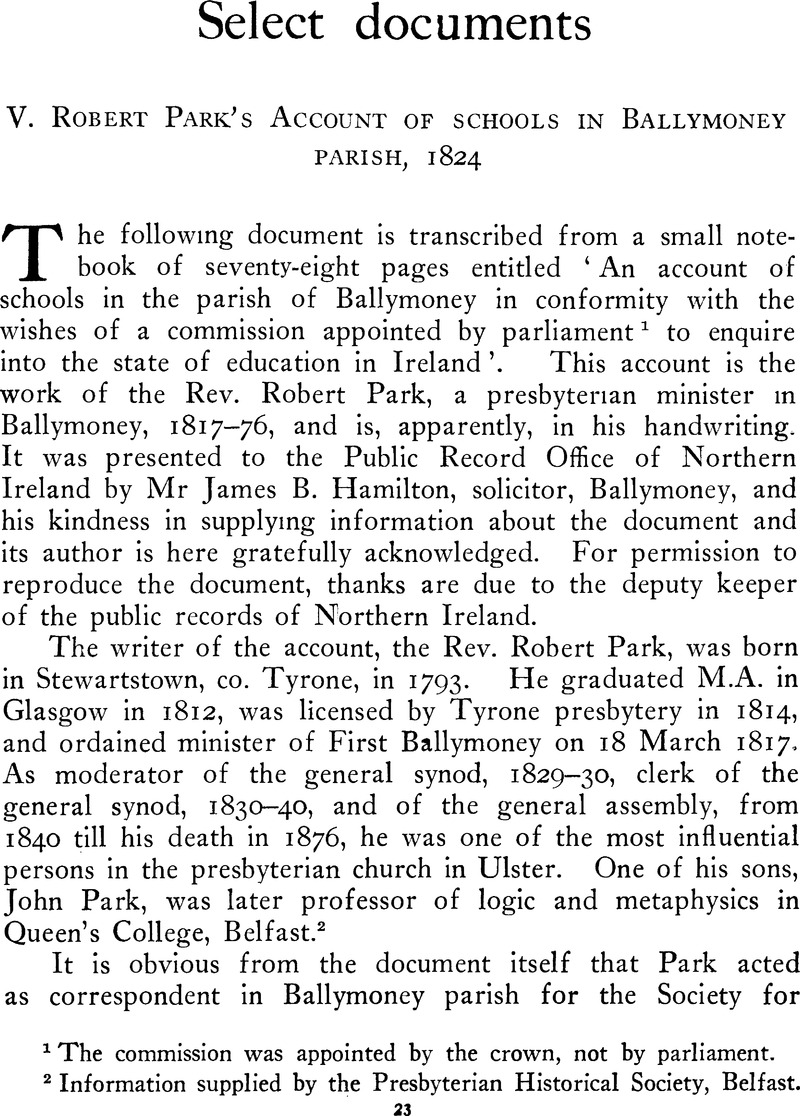 1 The commission was appointed by the crown, not by parliament.

4 Cf. Fourteenth report of the board of education; reprinted in Belfast Magazine, x. 104.

5 Cf. Edgeworth, R. L. to the lord primate, in appendix to Fourteenth report of the board of education (in Belfast Magazine, x. 181): ‘Of the four thousand educated at Lancaster’s school not one has ever been brought into a court of justice’.

7 Kingsmill Moore, H., An unwritten chapter in the history of education, p. 15.

8 Kingsmill Moore quotes the record of the O’Connell centenary, which says O’Connell was a member of the board (op. cit., p. xvii). I do not know what is meant by ‘the board’ O’Connell certainly was a subscriber and a member of the society, but his name does not appear in the committee names published year by year from 1813 onwards in the Dublin Treble Almanack.

17 An English school was one which gave an ‘English’ education as opposed to a Latin school. It was attended by pupils destined for commercial pursuits rather than for the professions. Besides English the curriculum might include mathematics, book-keeping, navigation, and a modern language other than English.

21 Park here includes a school which, as he later states, is outside the parish. The same is true of Nos 26–7.

25 For David Manson, a Belfast schoolmaster, compiler of the Dictionary and author of many school text-books see D.N.B.

26 Gough’s Arithmetic was a household book in the south as well as in the north of Ireland. Its author, John Gough, was master of the Friends’ School, Lisburn, 1774–91.

27 The Irish shilling had thirteen pennies, hence the Irish guinea was value for 22s. 9d. Even after the union of the exchequers the practice of charging fees according to the old coinage seems to have persisted. Fees of 2s. 2d. and 5s. 5d. per quarter are also common in this report: these represent the values in English money of the Irish florin and crown. It was perhaps an additional advantage that these worked out at an integral number of pence per week, reckoning thirteen weeks in the quarter.

30 The variety of reading matter was due to the fact that each child brought to school what was perhaps the only book in his parents’ house. Sometimes the books used were most unsuitable for children. Cf. First rep. Ir. educ. inquiry, pp. 43–44.

31 A parliamentary grant made in 1819 empowering the lord lieutenant to issue sums of money from the consolidated fund in aid of schools established by voluntary subscriptions. Cf. First rep. Ir. educ. inquiry, pp. 58–60.

33 This sentence is underlined in pencil in the MS. A pencil note at the foot of the page ‘See Report, p. 134’ appears to refer to ** above. There is no reference to Bendooragh school on p. 134, but on p. 137 of the Second Report it is listed among the schools in connexion with the K.P.S.

34 This is the only reference to music in Park’s account.

36 This sentence underlined in the MS.

37 Possibly Philip McCambridge, master of the Claghry school, no. 21.

39 189 pupils who had been instructed by James Thomson in the mathematical school of the Belfast Academical Institution became teachers (Fourth rep. Ir. educ. enquiry, p. 14).