Globalising Germany: Exchange Networks in an Age of Nation-Empires 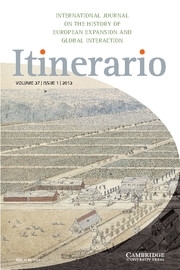 Letter from the Editors

Reviews: Europe and the Wider World