Home
The Journal of Economic History 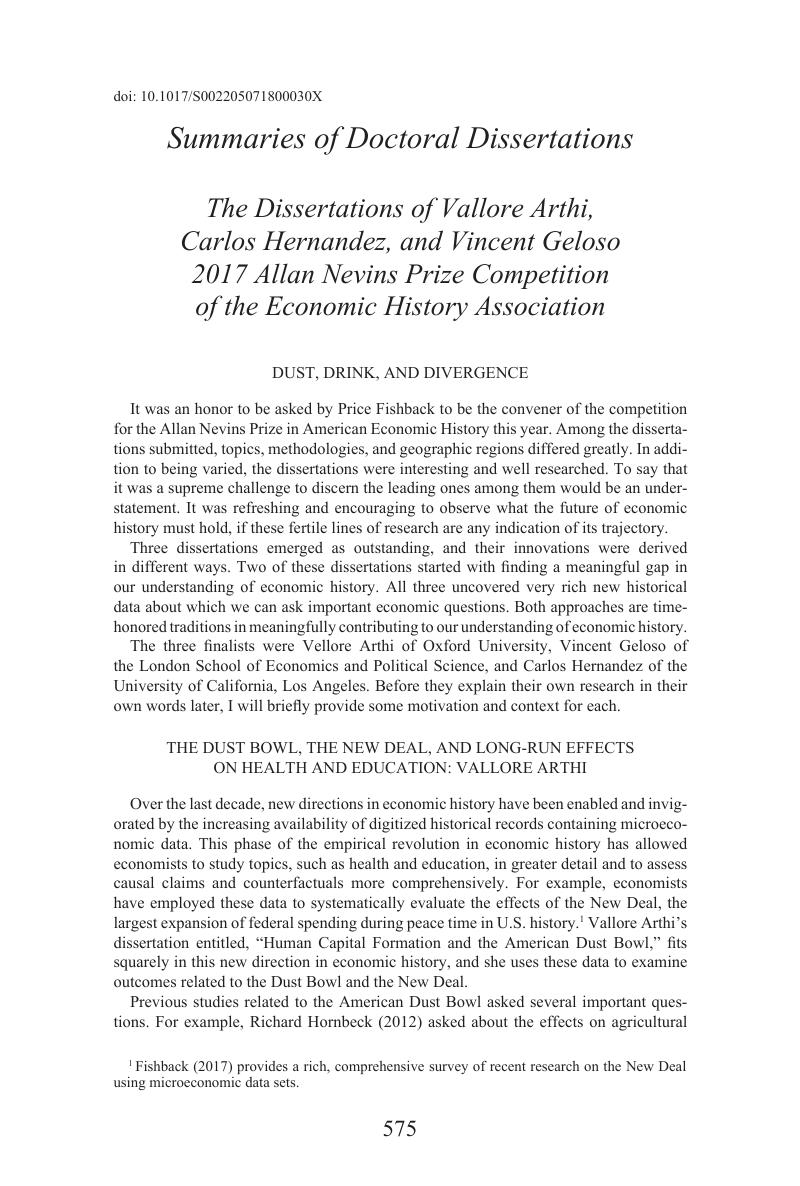 1 Henceforth, I will use the terms “Quebec” and “Canada” interchangeably as they meant largely the same thing until the 1790s.

4 These numbers were recently extended to 1775 (Geloso 2017); all numbers in this summary relate to the numbers in the dissertation.

Carlos Eduardo Hernández, Assistant Professor, School of Management, Universidad de los Andes, Bogotá, Colombia. Email: carlosehernandez@uniandes.edu.co. This dissertation was completed under the supervision of Leah Boustan, University of California, Los Angeles. This dissertation was completed at the University of California, Los Angeles, under the supervision of Leah Boustan (chair), Dora Costa, Walker Hanlon, Romain Wacziarg, and Edward Leamer. The third chapter of the dissertation is coauthored with Lynne Zucker and Michael Darby.

I am thankful for the research assistance of Carlos Carias, Ryan Schwartz, Qing Cao, Malcolm Galligan, and Tae Min Son. I acknowledge the generous financial support of the Center of Economic History at UCLA, the All-UC Group in Economic History, the Economic History Association, the Institute for Humane Studies, Colfuturo, and Banco de la República. The third chapter of the dissertation was supported by grants from the National Science Foundation (grants SES–0304727, SES–0830983, and SES–1158907) and the Ewing Marion Kauffman Foundation (grants 2008–0028 and 2008–0031).

2 Stack (2000) explains the nature of competition between national, regional, and local breweries between 1865 and 1920.

4 By 1914, some states and counties in rural areas and in the south were already dry. However, the level of demand from those counties was low in the first place, due to the prevalence of religious denominations opposed to the consumption of alcohol.

Vellore Arthi, Assistant Professor, Department of Economics, University of Essex, Colchester, UK. E-mail: v.arthi@essex.ac.uk. This dissertation was completed under the supervision of James Fenske and Jane Humphries at the University of Oxford.

1 Although two recent studies, Fishback and Thomasson (2014) and Cutler, Miller, and Norton (2007), examine the effect of early-life exposure to a bundle of 1930s-era shocks (that is, the Great Depression and the Dust Bowl) on later-life wellbeing, my dissertation is focused on quantifying the long-term human costs of this natural disaster as separate from the larger macroeconomic shocks of the Great Depression.

1 During these years, Italian GDP grew at the unprecedented annual rate of 6.3 percent (Fauri 2006).

2 For the impact of foreign aid on economic development, see, for instance, Qian (2015) and Burnside and Dollar (2000). For the effects of management and technology transfers on firm performance, see Bruhn, Dean, and Schoar (2017) and Bloom et al. (2013). For the role of education expansion on innovation, see Toivanen and Väänänen (2015).

1 For instance, Patrick Manning’s address as incoming president of the American Historical Association in 2017 was a call for new approaches to inequality within and beyond the historical discipline.

2 The study of impunity in international law is conventionally dated to the 2002 founding of the ICC, which was specifically intended to combat the problem. The field is currently witnessing a revisionist move, as in Engel, Miller, and Davis (2016).

The Journal of Economic History
×
Powered by UNSILO

The Journal of Economic History
×