The Journal of Economic History

Published on behalf of The Economic History Association
Journal Home 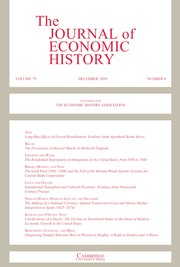 IS INNOVATION BAD FOR US?