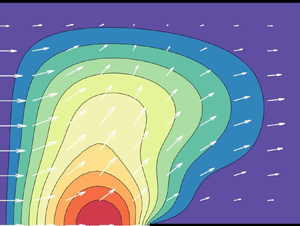 It is known that an increased flow rate can be achieved in channel flows when smooth walls are replaced by superhydrophobic surfaces. This reduces friction and increases the flux for a given driving force. Applications include thermal management in microelectronics, where a competition between convective and conductive resistance must be accounted for in order to evaluate any advantages of these surfaces. Of particular interest is the hydrodynamic stability of the underlying basic flows, something that has been largely overlooked in the literature, but is of key relevance to applications that typically base design on steady states or apparent-slip models that approximate them. We consider the global stability problem in the case where the longitudinal grooves are periodic in the spanwise direction. The flow is driven along the grooves by either the motion of a smooth upper lid or a constant pressure gradient. In the case of smooth walls, the former problem (plane Couette flow) is linearly stable at all Reynolds numbers whereas the latter (plane Poiseuille flow) becomes unstable above a relatively large Reynolds number. When grooves are present our work shows that additional instabilities arise in both cases, with critical Reynolds numbers small enough to be achievable in applications. Generally, for lid-driven flows one unstable mode is found that becomes neutral as the Reynolds number increases, indicating that the flows are inviscidly stable. For pressure-driven flows, two modes can coexist and exchange stability depending on the channel height and slip fraction. The first mode remains unstable as the Reynolds number increases and corresponds to an unstable mode of the two-dimensional Rayleigh equation, while the second mode becomes neutrally stable at infinite Reynolds numbers. Comparisons of critical Reynolds numbers with the experimental observations for pressure-driven flows of Daniello et al. (Phys. Fluids, vol. 21, issue 8, 2009, p. 085103) are encouraging.