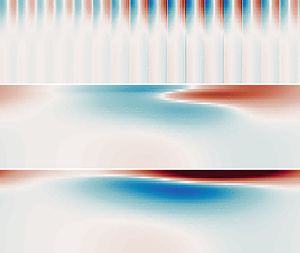 We examine Lagrangian transport by a nonlinearly evolving vertical mode-1 internal tide in non-uniform stratification. In a companion paper (Sutherland & Dhaliwal, J. Fluid Mech., 2022, in press) it was shown that a parent internal tide can excite successive superharmonics that superimpose to form a solitary wave train. Despite this transformation, here we show that the collective forcing by the parent wave and superharmonics is effectively steady in time. Thus we derive relatively simple formulae for the Stokes drift and induced Eulerian flow associated with the waves under the assumption that the parent waves and superharmonics are long compared with the fluid depth. In all cases, the Stokes drift exhibits a mixed mode-1 and mode-2 vertical structure with the flow being in the waveward direction at the surface. If the background rotation is non-negligible, the vertical structure of the induced Eulerian flow is equal and opposite to that of the Stokes drift. This flow periodically increases and decreases at the inertial frequency with maximum magnitude twice that of the Stokes drift. When superimposed with the Stokes drift, the Lagrangian flow at the surface periodically changes from positive to negative over one inertial period. If the background rotation is zero, the induced Eulerian flow evolves non-negligibly in time and space for horizontally modulated waves: the depth below the surface of the positive Lagrangian flow becomes shallower ahead of the peak of the amplitude envelope and becomes deeper in the lee of the peak. These predictions are well-captured by fully nonlinear numerical simulations.

Discussed in: The nonlinear evolution of internal tides. Part 2. Lagrangian transport by periodic and modulated waves