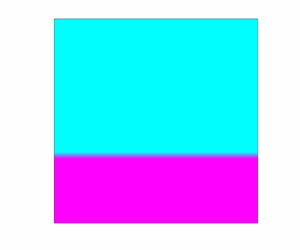 Active diffusion of substances in binary immiscible and incompressible fluids with different densities occurs universally in nature and industry, but relevant mathematical models and numerical simulation have been studied scarcely so far. In this paper, a thermodynamically consistent phase-field model is established to describe the activated solute transport in binary fluids with different densities. A mixed free-energy function for multiple solutes is proposed, which leads to different solute chemical potentials in binary solvent fluids, thus it has the ability to characterize the solubility difference of the solutes in two solvents. The two-phase flow is governed by a general hydrodynamic phase-field model that can account for general average velocity and different densities. The proposed model is derived rigorously using the second law of thermodynamics. Moreover, a general multi-component solute diffusion model is established using the Maxwell–Stefan approach, which involves the crossing influences between different solutes. To solve the model effectively, an efficient, linearized and decoupled numerical method is proposed for the model as well. The proposed numerical method can preserve the thermodynamical consistency, i.e. obeying an energy dissipation law at the discrete level, as well as guarantee the mass conservation law for the solutes and solvent fluids. Numerical experiments are carried out to show that the proposed model and numerical method can simulate various processes of the solute active diffusion in two-phase solvent fluids.