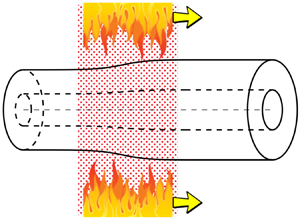 The collapse under surface tension of a long axisymmetric capillary, held at both ends and softened by a travelling heater, is used to determine the viscosity or surface tension of silica glasses. Capillary collapse is also used in the manufacture of some optical fibre preforms. Typically, a one-dimensional (1-D) model of the closure of a concentric fluid annulus is used to relate a measure of the change in the cross-sectional geometry, for example the external radius, to the desired information. We here show that a two-dimensional (2-D) asymptotic model developed for drawing of optical fibres, but with a unit draw ratio, may be used and yields analytic formulae involving a single dimensionless parameter, the scaled heater speed