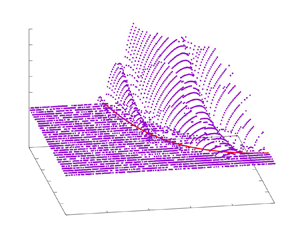 We explore basic mechanisms for the instability of finite-amplitude interfacial gravity waves through a two-dimensional linear stability analysis of the periodic and irrotational plane motion of the interface between two unbounded homogeneous fluids of different density in the absence of background currents. The flow domains are conformally mapped into two half-planes, where the time-varying interface is always mapped onto the real axis. This unsteady conformal mapping technique with a suitable representation of the interface reduces the linear stability problem to a generalized eigenvalue problem, and allows us to accurately compute the growth rates of unstable disturbances superimposed on steady waves for a wide range of parameters. Numerical results show that the wave-induced Kelvin–Helmholtz (KH) instability due to the tangential velocity jump across the interface produced by the steady waves is the major instability mechanism. Any disturbances whose dominant wavenumbers are greater than a critical value grow exponentially. This critical wavenumber that depends on the steady wave steepness and the density ratio can be approximated by a local KH stability analysis, where the spatial variation of the wave-induced currents is neglected. It is shown, however, that the growth rates need to be found numerically with care and the successive collisions of eigenvalues result in the wave-induced KH instability. In addition, the present study extends the previous results for the small-wavenumber instability, such as modulational instability, of relatively small-amplitude steady waves to finite-amplitude ones.