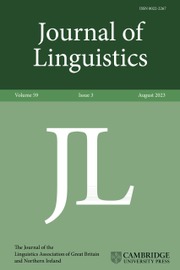 The expression of ‘inferentiality’ in Abkhaz1

In Comrie (1976: 108) we read: ‘Several languages have special inferential verb forms, to indicate that the speaker is reporting some event that he has not himself witnessed, but about whose occurrence he has learnt at second hand (though without, incidentally, necessarily casting doubt on the reliability of the information)’. Two pages later Comrie writes follows:

Serebrennikov (1960: 66) lists the following languages known to him where there is a close formal relation, down to identity, between the expression of perfect and inferential meaning: Turkic languages: the Uralic languages Nenets (Yurak-Samoyed), Finnish, Estonian, Man (Cheremis), Komi (Zyryan), Udmurt (Votyak), Mańśi (Vogul); Georgian; and the Indo-European languages Latvian, Bulgarian, and Albanian.

The expression of ‘inferentiality’ in Abkhaz1
×

The expression of ‘inferentiality’ in Abkhaz1
×

The expression of ‘inferentiality’ in Abkhaz1
×
×