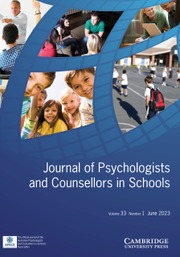 Journal of Psychologists and Counsellors in Schools

A Cyberbullying Intervention With Primary-Aged Students

A small-scale evaluation of a psycho-educational program on cyberbullying with a group of Year 6 girls was implemented over six sessions, and was subsequently evaluated. Its content included knowledge of cyberbullying and its effects, and management and safety strategies for the participants and their peers. Increases in the girls’ detailed knowledge of cyberbullying and safety strategies followed the program's implementation. Students provided positive evaluations of the program and also suggested some good ideas for a schoolwide policy on cyberbullying. To date there has been minimal intervention research on cyberbullying, and few studies with primary-aged students. The present study redresses this imbalance.

A Cyberbullying Intervention With Primary-Aged Students
×

A Cyberbullying Intervention With Primary-Aged Students
×

A Cyberbullying Intervention With Primary-Aged Students
×
×