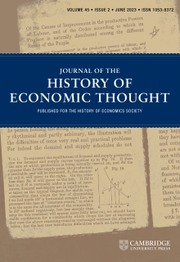 Journal of the History of Economic Thought

THE MARXIAN WAGE THEORY AGAINST THE “ABSOLUTE IMMIZERATION” DOCTRINE

This paper provides a refutation of the “absolute immizeration” doctrine that S. Hollander attributes to Marx, by emphasizing the Marxian original categories and laws of capitalist production in order to base Marx’s opposition to this doctrine on his more profound opposition to Classics about the law of supply and demand for labor.

The paper proceeds as follows: first, it is shown that the Marxian subsistence wage does not exclude population growth. Second, the analysis of surplus population will reveal how it is not only a condition of the business cycle, but also one of its immediate results. In this sense, the so-called theory of dual labor force, which Hollander uses to discard the role of surplus population in the decreasing real-wage trend, proves a misunderstanding of the origin and nature of the industrial reserve army.

From the labor demand side, on the other hand, the endogeneity of technical progress precludes any “ongoing process” of increasing organic composition of capital. Finally, it will appear that categories of labor power, wages defined as the value of labor power, or laws such as decreasing necessary labor and increasing surplus labor, allow Marx to develop a law of supply and demand for labor partly unrelated to the number of workers and the evolution of population growth, which necessarily rules out any birth-rate control policy.

THE MARXIAN WAGE THEORY AGAINST THE “ABSOLUTE IMMIZERATION” DOCTRINE
×

THE MARXIAN WAGE THEORY AGAINST THE “ABSOLUTE IMMIZERATION” DOCTRINE
×

THE MARXIAN WAGE THEORY AGAINST THE “ABSOLUTE IMMIZERATION” DOCTRINE
×
×