Home
Journal of the Society for American Music 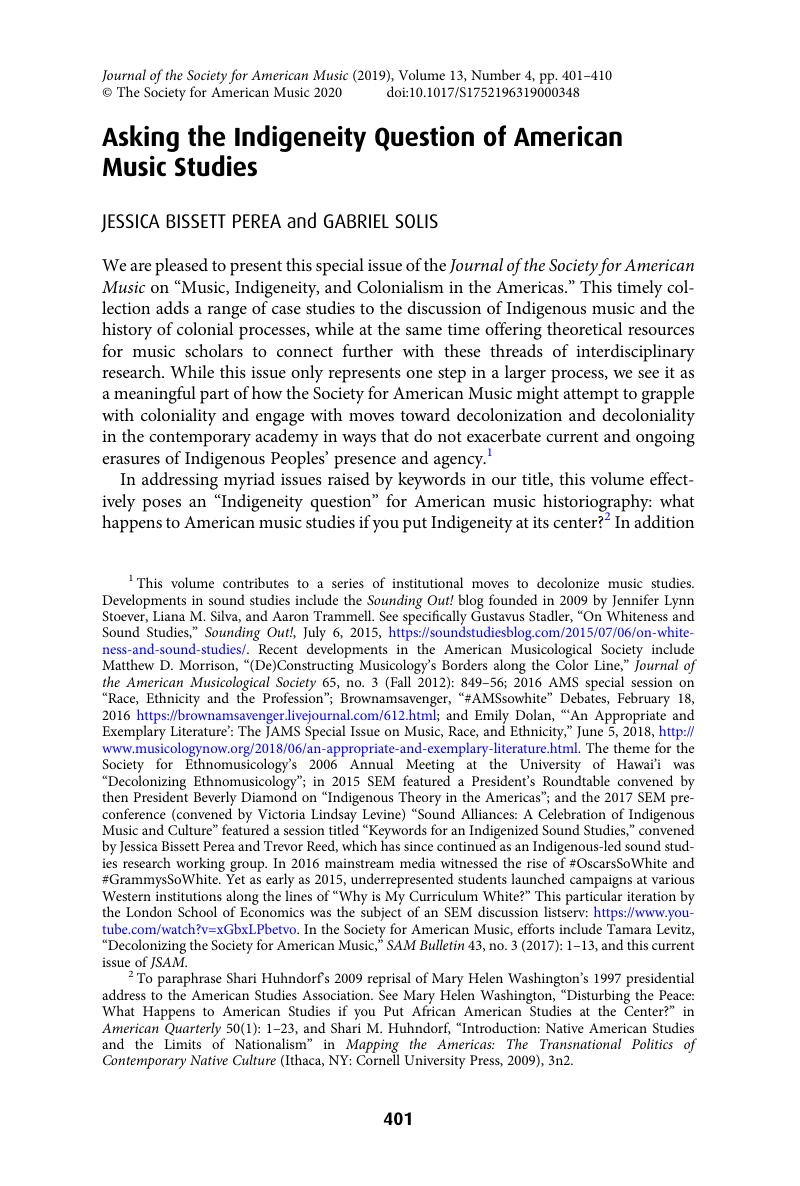 COPYRIGHT: © The Society for American Music 2020

1 This volume contributes to a series of institutional moves to decolonize music studies. Developments in sound studies include the Sounding Out! blog founded in 2009 by Jennifer Lynn Stoever, Liana M. Silva, and Aaron Trammell. See specifically Gustavus Stadler, “On Whiteness and Sound Studies,” Sounding Out!, July 6, 2015, https://soundstudiesblog.com/2015/07/06/on-whiteness-and-sound-studies/. Recent developments in the American Musicological Society include Morrison, Matthew D., “(De)Constructing Musicology's Borders along the Color Line,” Journal of the American Musicological Society 65, no. 3 (Fall 2012): 849–56; 2016 AMS special session on “Race, Ethnicity and the Profession”; Brownamsavenger, “#AMSsowhite” Debates, February 18, 2016 https://brownamsavenger.livejournal.com/612.html; and Emily Dolan, “‘An Appropriate and Exemplary Literature’: The JAMS Special Issue on Music, Race, and Ethnicity,” June 5, 2018, http://www.musicologynow.org/2018/06/an-appropriate-and-exemplary-literature.html. The theme for the Society for Ethnomusicology's 2006 Annual Meeting at the University of Hawai'i was “Decolonizing Ethnomusicology”; in 2015 SEM featured a President's Roundtable convened by then President Beverly Diamond on “Indigenous Theory in the Americas”; and the 2017 SEM pre-conference (convened by Victoria Lindsay Levine) “Sound Alliances: A Celebration of Indigenous Music and Culture” featured a session titled “Keywords for an Indigenized Sound Studies,” convened by Jessica Bissett Perea and Trevor Reed, which has since continued as an Indigenous-led sound studies research working group. In 2016 mainstream media witnessed the rise of #OscarsSoWhite and #GrammysSoWhite. Yet as early as 2015, underrepresented students launched campaigns at various Western institutions along the lines of “Why is My Curriculum White?” This particular iteration by the London School of Economics was the subject of an SEM discussion listserv: https://www.youtube.com/watch?v=xGbxLPbetvo. In the Society for American Music, efforts include Levitz, Tamara, “Decolonizing the Society for American Music,” SAM Bulletin 43, no. 3 (2017): 1–13, and this current issue of JSAM.

Our cautious use of the terms “Native American” and “Indigenous” is deliberate in that we are referencing imperfect English language names for a particular yet dense genre of humans known to be the original stewards of the lands and waters currently known as the Americas, the Pacific or Oceania, and the Caribbean. While this issue will use the term “Indigenous” as shorthand for the density of Native Americans, a broader question we encourage all scholars and authors to consider is whether or not the term “Indigenous” is one that your local communities would use to describe themselves.

3 Atalay, Sonya, Community-Based Archaeology: Research with, by, and for Indigenous and Local Communities (Berkeley: University of California Press, 2012).

7 Younging, Gregory, Elements of Indigenous Style: A Guide for Writing by and about Indigenous Peoples (Edmonton, ON: Brush Education, 2018).

10 The phrase “nothing about us without us” originated in disability activism of the 1990s, and more recently taken up by First Nations activists in Canada. For example, see “Kanata: Director Robert Lepage Open to Dialogue with Indigenous Artists over New Play,” CBC News, July 16, 2018, https://www.cbc.ca/news/canada/montreal/quebec-robert-lepage-response-indigenous-artists-criticism-1.4748306; “Indigenous Classical Musicians Have a Message for the Music Industry: Nothing about Us without Us, CBC Radio Canada, n.d., http://www.cbc.ca/player/play/1450106435665.

11 Younging's principle thirteen—“Terms that should be capitalized”—goes into more depth on the topic of capitalization, explaining how terms relating to Indigenous, such as Indigeneity (“quality of being Indigenous”), are always capitalized (e.g., the same as Blackness, Whiteness, etc.).

16 Mail Obomsawin, “This Land is Whose Land? Indian Country and the Shortcomings of Settler Protest.” Smithsonian Folkways June 14, 2019. https://folklife.si.edu/magazine/this-land-is-whose-land-indian-country-settler-protest.

18 For a critique of white patriarchal privilege, power, and exclusion in United States-based musicology as a profession, see Levitz, Tamara, “The Musicological Elite,” in Current Musicology 102 (Spring 2018): 9–80.

19 See Project Spectrum: a coalition of graduate students and faculty members committed to the issue of diversity in music theory, musicology, and ethnomusicology, https://projectspectrummusic.com/mission/.

20 See The BIPOC Project: A Black, Indigenous, and People of Color Movement, https://www.thebipocproject.org/about-us.

Journal of the Society for American Music
×

Journal of the Society for American Music
×