Navigating Normativities: Gender and Sexuality in Text and Talk 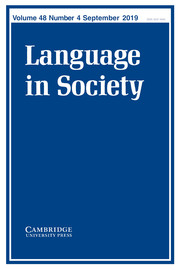