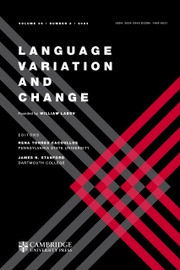 It's not or isn't it? Using large corpora to determine the influences on contraction strategies

In analyzing not-negation variation in English it becomes clear that specific strategies are used for prosodic emphasis and reduction of not in different social situations, and that contraction strategies vary independently of prosodic reduction. This article focuses on the factors influencing contraction strategies that are clearly dialect related and attempts to tease out those factors that are related to register and speaker stance. First, we review background information critical to an adequate analysis of not-negation and not-contraction. We then describe the corpora chosen for the present study, the research methods employed in the analysis, and the results of the analysis. The variable under analysis is the choice between uncontracted and not-contracted forms and between not-contracted and Aux-contracted forms in well-formed declarative sentences, for verbs which permit both. We end with some suggestions for corpus composition that will enable meaningful comparisons between social situations and between speakers, or characters, within one corpus. As researchers we can assure that future corpora will permit increasingly inclusive and interesting comparative studies; we close with some suggestions for those who wish to carry out studies.

It's not or isn't it? Using large corpora to determine the influences on contraction strategies
×

It's not or isn't it? Using large corpora to determine the influences on contraction strategies
×

It's not or isn't it? Using large corpora to determine the influences on contraction strategies
×
×