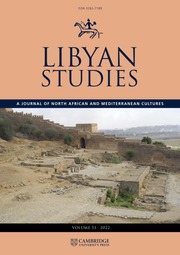 Lepcis Magna is one of the best examples of an African city during the Roman period. Its importance lies in its location in relation to the Mediterranean and the well-watered hinterland of Tripolitania and its resources. The key factor in the development of the city was its position, sheltered by a promontory, at the mouth of Wadi Lebda. It displays the processes of growth which other Roman town-plans have made familiar: a nuclear chessboard with divergent though mostly rectilinear enlargements. Lepcis became more important than the other two ports of Oea and Sabratha.

Wealthy private citizens contributed greatly toward the buildings of the first century. In the second century the Libyan S. Severus became Emperor at a time when a lively and independent culture was growing up in the western part of North Africa. Lepcis attained its greatest architectural glories under S. Severus and his two sons. With the decline of seaborne trade that followed the serious economic crises at the end of the third century, raids by the tribes of the interior became bolder and more ruthless.