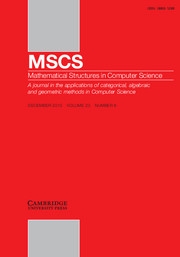 ‘Geometry and Concurrency’ is not (yet) a well-established domain of research, but consists rather of a collection of seemingly related techniques, algorithms and formalizations, coming from different application areas, and accumulated over a long period of time. There is currently a certain amount of effort being made to unify these, following the workshop ‘New Connections between Computer Science and Mathematics’ held at the Newton Institute in Cambridge, England in November 1995 (and sponsored by HP/BRIMS). More recently, the first workshop on the same subject was held in Aalborg, Denmark (see http://www.math.auc.dk/˜raussen/admin/workshop/workshop.html) where the articles of this issue, among others, were first sketched.

As a starter, and to put in context the papers by Lisbeth Fajstrup, Philippe Gaucher, Maurice Herlihy, Vaughan Pratt, Sergio Rajsbaum and Martin Raussen that appear later in this issue, I have written a brief historical note, or survey, which follows and naturally completes this foreword.

Last and not least, I must express my gratitude to Giuseppe Longo, who gave me the opportunity to act as a guest editor for this special issue, and who very kindly helped me through the many different steps that editing necessitates. My very warm thanks also go to the authors who did a very nice job, in a relatively short time. Finally, I wish to thank the referees of this issue, who found ‘bugs’ that I would not have found, and who suggested very useful improvements to the authors. The referees were Nir Shavit, Stefan Sokolowski, Christophe Tabacznyj, Jean Goubault-Larrecq, Arnaud Venet, Ian Mackie (who helped me with the survey article), Ronnie Brown and Tim Porter, as well as some of the authors who cross-checked other authors' articles, Philippe Gaucher, Martin Raussen and Lisbeth Fajstrup.

This special issue develops one of research themes, sect. 1.7, in the ‘Atelier de Recherche Géométrie et Cognition’ (see http://www.dmi.ens.fr/users/longo/geocogni.html)
You have Access