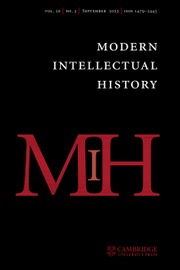 Rawls's Teaching and the “Tradition” of Political Philosophy

Part of: The Historical Rawls

This article explores Rawls's evolving orientation to “the tradition of political philosophy” over the course of his academic career, culminating in Justice as Fairness: A Restatement (2001). Drawing on archival material, it argues that Rawls's fascination with tradition arose out of his own pedagogical engagement with the debate around the “death of political philosophy” in the 1950s. Throughout, I highlight the significance of Rawls's teaching—beginning with his earliest lectures on social and political philosophy at Cornell, to his shifting views on “the tradition” in his published works, culminating in the increasingly contextually minded and irenic approach on display in Political Liberalism (1993) and Justice as Fairness. This neglected aspect of the “historical Rawls” offers insight into how Rawls himself might have read “John Rawls” as a figure in the history of political thought—and reveals that he spent a lot more time contemplating that question than one might think.

5 See Forrester, Katrina, In the Shadow of Justice: Postwar Liberalism and the Remaking of Political Philosophy (Princeton, 2019), 270Google Scholar. Andrew Sabl makes the case for a “Harvard school” of political theory associated with Rawls's colleague Judith Shklar as representing a “realist” reaction against Rawlsianism in “History and Reality: Idealist Pathologies and ‘Harvard School’ Remedies,” in Floyd and Stears, Political Philosophy versus History?, 151–76.

9 Rawls, Lectures on the History of Political Philosophy, 3.

14 Rawls first taught his long-running course Phil 171, “Modern Political Philosophy,” in the 1959–60 academic year as a visitor at Harvard.

20 John Plamenatz, Man and Society: A Critical Examination of Some Important Social and Political Theories from Machiavelli to Marx, 2 vols. (London, 1963), 1: xii.

26 Skinner, Quentin, “Meaning and Understanding in the History of Ideas,” History and Theory 8/1 (1969), 3–53CrossRefGoogle Scholar.

27 For this trend see Floyd and Stears, Political Philosophy versus History?.

34 Rawls, A Theory of Justice, 166, 11. According to Joshua Cohen, Rawls “once said … that his two principles of justice could be understood as an effort to spell out the content of the general will.” Joshua Cohen, Rousseau: A Free Community of Equals (Oxford, 2010), 2.

43 The published footnote cites the Nicomachean Ethics and credits the “interpretation” to Vlastos's reprinted essay in Gregory Vlastos, Plato: A Collection of Critical Essays (New York, 1971), but cites the wrong page. In the first draft of A Theory of Justice, Rawls inserts a citation only to “Ethics Bk V, ch. 1,” but notes “cf. Vlastos, JPhil” on the reverse page. Rawls, “A Theory of Justice, chapter I, 1969 December.”

52 He spent two years visiting at Cornell during the Ph.D. before returning to Princeton as a postdoctoral instructor in 1950.

53 John Rawls, “A Study in the Grounds of Ethical Knowledge: Considered with Reference to Judgments on the Moral Worth of Character” (Ph.D. dissertation, Princeton University, 1950), 49–50.

54 I am grateful to Robert Cheah for his generous discussion and insights on this point. See Robert Cheah, “Moral Psychology and Reflective Equilibrium in the Work of John Rawls, 1950–1971” (M.Phil. thesis, University of Oxford, 2019).

55 Rawls, “Study in the Grounds of Ethical Knowledge,” 52 n. 2, my emphasis. To Pollock's suggestion that philosophers simply “organize the common moral sense of good men,” Rawls added that they could “attempt to show wherein its dictates are justified, as well.” See Sir Frederick Pollock, Spinoza: His Life and Philosophy, 2nd edn (London, 1899), 266. Rawls also cited Pollock approvingly on “the capacity of the average man to be an expert on moral questions. He also held that unusual philosophical speculations about morals did not, and ought not, have much weight” (96).

56 Ibid., 69, my emphasis. I thank Robert Cheah for discussion on this point.

57 Eric Schliesser, “On Rawls and Esotericism,” Digressions&Impressions, at https://digressionsnimpressions.typepad.com/digressionsimpressions/2015/07/on-rawls-and-esotericism.html. Cf. Arthur Melzer, Philosophy between the Lines: The Lost History of Esoteric Writing (Chicago, 2014), 135. Cheah sees this shift rather as a return to form in the Ph.D. thesis.

61 John Plamenatz, Mill's Utilitarianism: Reprinted with a Study of the English Utilitarians (Oxford, 1949).

64 I am grateful to Robert Cheah for this formulation.

77 Rawls, “The Theory of the Social Contract,” 1, original underlining.

89 Sheldon Wolin, Politics and Vision: Continuity and Innovation in Western Political Thought (Boston, 1960), 1–2. Rawls's copy is available in Box 13, Personal Library of John Rawls (HUM 48.1), Harvard University Archives. It is difficult to date Rawls's notes on the text precisely. They are made in red ink similar to other notes made in the 1980s, suggesting that he may have returned to Wolin's text long after it was published.

93 Rawls, Lectures on the History of Political Philosophy, xvii. One student in Rawls's final series of 171 lectures was Bryan Garsten, who has been generous in sharing his recollections.

94 John Rawls, “The Basic Liberties and Their Priority,” in John Rawls and Sterling M. McMurrin, eds., Liberty, Equality, and Law: Selected Tanner Lectures on Moral Philosophy (Salt Lake City, 1987), 3–87, at 17. This claim would become most closely associated with Political Liberalism, but it appears with almost identical phrasing in Rawls, “Justice as Fairness: Political not Metaphysical,” Philosophy and Public Affairs 14/3 (1985), 223–51; Rawls, The Law of Peoples (Cambridge, MA, 1999); and the original article in Critical Inquiry 20/1 (1993), 36–68; and Rawls, Justice as Fairness: A Restatement, as well as in his collected lectures on moral and political philosophy.

96 See Jeffrey Bercuson, John Rawls and the History of Political Thought: The Rousseauvian and Hegelian Heritage of Justice as Fairness (London, 2014).

105 Some Straussians have been tempted to credit Bloom's review for the increasing openness to historical insight in Rawls's later works. E.g. Jerome C. Foss, Constitutional Democracy and Judicial Supremacy: John Rawls and the Transformation of American Politics (Amherst, 2016). Rawls's treatment of nineteenth-century American abolitionists has also been taken as evidence of an increasing openness to the importance of history for theory. See Melissa Lane, “History and Theory without Teleology,” in Floyd and Stears, Political Philosophy versus History?, 128–50, at 150. cf. Müller, Jan-Werner, “Rawls, Historian: Remarks on Political Liberalism's ‘Historicism’,” Revue internationale de philosophie 237/3 (2006), 327–39Google Scholar; and Ronald Beiner, “John Rawls's Genealogy of Liberalism,” in Shaun Young, ed., Reflections on Rawls: An Assessment of His Legacy (Farnham, 2009), 73–90. A likely influence in his turn to the problem of religious toleration, as Seyla Benhabib notes, was Rawls's friendship with his long-term Harvard colleague and occasional early modernist Judith Shklar.

106 See Frazer, “The Modest Professor,” 220–21. Frazer notes that some Straussians were quick to claim Rawls for themselves against the Cambridge school on this basis, e.g. Zuckert, Michael, “John Rawls, Historian,” Claremont Review of Books 2/4 (2002)Google Scholar, at www.claremont.org/crb/article/john-rawls-historian. But see Steven B. Smith, “The Philosopher of Our Times,” New York Sun, 11 May 2007, at https://www.nysun.com/arts/philosopher-of-our-times/54265.

110 Rawls, Lectures on the History of Political Philosophy, 121.

114 I am grateful to Sophie Smith for first bringing this correspondence to my attention.

116 Rawls, Lectures on the History of Political Philosophy, 103, xiii. This idea from Collingwood was central to Skinner's own methodological arguments, as well as to John Dunn's. See Skinner, “Meaning and Understanding,” 50–51; and Dunn, “The Identity of the History of Ideas,” 100 n. 6.

117 John Rawls, “Some Remarks about My Teaching,” quoted in Samuel Freeman, “Editor's Foreword” in Rawls, Lectures on the History of Political Philosophy, xii–xviii, at xiii.

118 Rawls, Lectures on the History of Political Philosophy, 103.

122 Alasdair MacIntyre, Whose Justice, Which Rationality? (Notre Dame, 1988), 326–7, 345–6, defines a tradition as a “self-aware” and “coherent movement of thought,” “originally rooted in contingent circumstance.” He cites Rawls as a liberal thinker aware of liberalism's contingency as a tradition, with its own “set of authoritative texts and its disputes over their interpretation.”

123 The student, Bill Hart, recalls that Rawls also told him that “a person has no place outside of history [hence] the desire to lift [one]self up out of [it is] a wish for vacuity.” Quoted in Reidy, David A., “Rawls on Philosophy and Democracy: Lessons from the Archived Papers,” Journal of the History of Ideas 78/2(2017), 265–74CrossRefGoogle ScholarPubMed, at 273.

124 Rawls, “Remarks about My Teaching,” xiii. For more on this teleology and the “romance of liberalism” see Brandon Terry's contribution to this forum.

126 See “Commonweal Interview with John Rawls,” in John Rawls, Collected Papers, ed. Samuel Freeman (Cambridge, MA, 1999), 616–22, at 621. One is reminded here and elsewhere of Rawls's enthusiastic notes on Isaac d'Huisseau's “compromise theory of tolerance” as “an agreement on essentials” from the early 1950s.

131 Smith's overview of the “memorializing” tendency in early historical treatments of Rawls suggests that his students were paying attention. Smith, this issue.

132 Rawls, Lectures on the History of Political Philosophy, 52, my emphasis.

134 Ibid., 151. This is fully consistent with his presentation of political philosophy as a tool also of “reconciliation” in Justice as Fairness, published the following year.

135 Rawls, Lectures on the History of Political Philosophy, 2, my emphasis.

Rawls's Teaching and the “Tradition” of Political Philosophy – ERRATUM

Rawls's Teaching and the “Tradition” of Political Philosophy
×

Rawls's Teaching and the “Tradition” of Political Philosophy
×

Rawls's Teaching and the “Tradition” of Political Philosophy
×
×