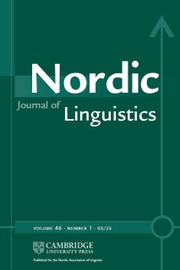 This special issue of the Nordic Journal of Linguistics is devoted to articles on a construction which since Holmberg (1986) has been referred to as object shift. Whereas sentential adverbs normally precede the object in Scandinavian, as shown in (1a), they tend to follow the object, when it is a pronoun, as in (1b).

This special issue of the Nordic Journal of Linguistics is devoted to articles on a construction which since Holmberg (Reference Holmberg1986) has been referred to as object shift. Whereas sentential adverbs normally precede the object in Scandinavian, as shown in (1a), they tend to follow the object, when it is a pronoun, as in (1b).

The five articles in this issue contribute towards a better understanding of the nature of object shift by detailed studies of the variation found among the Scandinavian languages (Danish, Faroese, Icelandic, Norwegian, Swedish and to some extent Övdalian), which types of objects may shift, how the syntax of individual languages affects the shifting options, and what role context plays. One area where more research is clearly needed concerns the role of prosody.

Previous studies have shown that there is considerable variation concerning object shift (for comprehensive overviews, see Thráinsson Reference Thráinsson, Baltin and Collins2001, Vikner Reference Vikner, Everaert and van Riemsdijk2006). Whereas pronominal object shift has been claimed to be obligatory in Danish and Norwegian (see Hellan & Platzack Reference Hellan and Platzack1995), it seems to be optional in Swedish (Josefsson Reference Josefsson, Delsing, Falk, Josefsson and Sigurðsson2003, Reference Josefsson2010; Andréasson Reference Andréasson, Butt and King2008), and even dispreferred in some of its varieties (Övdalian and Finland Swedish) (Garbacz Reference Garbacz2010). Most previous studies, however, are based on acceptability judgments from a small number of informants. In their paper ‘Object shift in spoken Mainland Scandinavian: A corpus study of Danish, Norwegian and Swedish’, Kristine Bentzen, Merete Anderssen and Christian Waldmann report on the results of an investigation of adult production in large spoken corpora of child–adult interaction, altogether a total of 210,000 utterances. This yielded 704 utterances containing negations and pronominal objects in the relevant configurations.Footnote 1 A careful analysis of the utterances shows that in Danish and Norwegian, there is indeed a very strong tendency for pronouns with nominal antecedents to shift (95% and 87%, respectively) whereas in Swedish only 64% of the utterances occurred with a shifted order.

Early studies of object shift did not pay attention to the fact that the type of referent may affect whether a pronoun is shifted or not. Andréasson (Reference Andréasson, Butt and King2008, Reference Andréasson2009) has shown that pronouns that refer to entities (nominal antecedents) are much more likely to shift than pronouns that refer to properties or events. This effect shows up very clearly in Bentzen et al.'s study: in Danish, only 15% of the pronouns with non-nominal antecedents were shifted, in Norwegian 5% and in Swedish 1%. The authors discuss how these findings can be accounted for within an information-structure approach which distinguishes different types of topics. Maia Andréasson's contribution, ‘Object shift in Scandinavian languages: The impact of contrasted elements’, also addresses the fact that pronouns with nominal antecedents are shifted more readily than pronouns with propositional antecedents.

As already mentioned, in contrast with Icelandic, Danish, Norwegian and Swedish do not allow full noun phrases to shift. In his article ‘Full NP Object Shift: The Old Norse Puzzle and the Faroese Puzzle revisited’, Höskuldur Thráinsson shows that NP objects may shift in Faroese too, but that this option seems to be more restricted than in Icelandic. Moreover, Thráinsson argues that full NP object shift was found in Old Norse more or less as frequently as in Modern Icelandic. He combines extensive corpus searches with questionnaire data and ends with a discussion about ‘competing grammars’.

Although Danish and Swedish are syntactically quite similar, they differ in the relative order of particles and objects in the VP. In Danish, objects precede particles, as shown in (3a), whereas the opposite order holds in Swedish, as shown in (3b).

In their article ‘Object shift and remnant VP-topicalisation: Danish and Swedish verb particles and let-causatives’, Eva Engels & Sten Vikner show that this difference affects the possibility for object shift. In Swedish, where the particle intervenes, object shift is correctly predicted not to be possible, as in (4a), whereas it does apply in Danish, as seen in (4b).

Engels and Vikner then show that these syntactic facts further predict whether or not object shift is possible in VP-fronting, both in verb particle constructions and in causative constructions, where Danish and Swedish display the same word order differences.

The categorial status of the object plays an important role in Bjarne Ørsnes’ article ‘VP anaphors and Object Shift: What do VP anaphors reveal about the licensing conditions for Object Shift in Danish?’. He argues that the selectional properties of the verb influence whether or not the VP-anaphoric pronominal object det ‘it’ with a VP antecedent can undergo object shift in Danish. More specifically, only verbs that select both a VP and an NP complement allow object shift of the VP anaphor det. In contrast, if the verb only selects a VP complement, a VP-anaphoric object det is not allowed inside the VP and must be placed clause-initially.

1.4 The role of context, cognitive status and information structure

In contrast with several earlier studies, which only looked at isolated sentences, the articles in this issue take the context of the utterance or sentence into account. Andréasson relates her findings for both pronominal and full NP object shift to the cognitive status of the objects (Gundel, Hedberg & Zacharski Reference Gundel, Hedberg and Zacharski1993) in terms of what level of activation is required in order to access the referent. In addition to activation, she finds that the presence of contrast affects the likelihood of object shift; contrast on the object tends to prevent shifting, while contrast on other elements in the clause facilitates shifting. She also touches upon the role of information structure. Bentzen et al. also discuss their results with respect to information structure, and suggest that certain types of topics (namely familiar and continuing topics) are more likely to undergo object shift, than other types of topics (namely aboutness topics), which tend to remain in situ.

The materials in Thráinsson's questionnaires to Icelandic, Faroese and Danish speakers contained context information which helped establish whether the relevant NP was given or new in the context. For Ørsnes, it is important to establish the information structure value of the VP anaphors.

Almost twenty years ago already Hellan & Platzack (1995) noted that prosody is a factor important for object shift, and more recently, Josefsson (Reference Josefsson2010) suggested that word accent plays a role in Swedish object shift. All of the articles in this issue also point in the direction that prosody must be part of an analysis of object shift, even if it is not a single decisive factor. Bentzen et al. for instance acknowledge the need for future thorough prosodic investigations of their findings, and Andréasson shows that the distinction between unstressed, slightly stressed and stressed pronouns is very important in order to account for when the shifted order is preferred. Although none of the articles in this collection provide phonetic or prosodic analyses, several researchers have begun to investigate the prosodic patterns more closely. Erteschik-Shir & Josefsson (Reference Erteschik-Shir and Josefsson2013) propose that the optionality of object shift is correlated with the presence or absence of tone distinctions. In a recent dissertation, Hosono (Reference Hosono2013) reports on phonetic analyses of examples with and without object shift, elicited from speakers of most of the Scandinavian varieties discussed in this issue. The author suggests that object shift is a gradient phenomenon and that it is sensitive to pitch. The earlier the pitch gesture occurs in utterances in a Scandinavian variety, the more likely object shift is to occur; the more delayed the pitch gesture is, the more likely it is that object shift is not used (Hosono Reference Hosono2013:154). Hosono's informants read out sentences from a script with lead-in questions, including some sentences which were ungrammatical in some Scandinavian varieties. More work on spontaneously produced data is obviously required.

Given that so many factors seem to interact in object shift, it is not surprising that three of the articles use Optimality Theory to model the relative importance of various factors. The three studies (by Andréasson, by Engels & Vikner and by Ørsnes) differ in the syntactic framework they adopt, but all use the ranking of violable constraints as the mechanism to model the patterns of variation found in and across the languages. Engels & Vikner mainly relate object shift to constraints on movement or syntactic structure, while Ørsnes’ constraints relate object positions to the information status of the object. Andréasson makes use of constraints that refer to activation levels and information structure, and her ordering of the constraints reflects linear precedence rather than fixed syntactic positions.

Each of the five articles presented in this special issue accounts for one or more aspect of the variation found with respect to object shift within and between the languages investigated. It remains to be seen if and how these analyses can be integrated with each other and with analyses in the literature to yield a more comprehensive picture of the variation. As noted above, such an integrated analysis also needs to take into account other options for realising objects such as the clause-initial position and ellipsis, as well as prosodic aspects.

1. Object shift is acquired late in Swedish- and Norwegian-speaking children, and is not consistently employed in a target-like manner until at least the age of 5–6 years (see Josefsson Reference Josefsson, Johnson and Gilbert1996 and Anderssen, Bentzen & Rodina Reference Anderssen, Bentzen and Rodina2012, respectively).

* Views captured on Cambridge Core between September 2016 - 17th January 2021. This data will be updated every 24 hours.