The spectacular partulid tree snail fauna of the Society Islands has been almost completely extirpated in recent decades following the deliberate introduction of the alien carnivorous snail Euglandina rosea. The greatest loss has occurred on the island of Raiatea, French Polynesia, home to an estimated 34 species (including 33 single-island endemics), all of which have been deemed extirpated in the wild. However, we report here the February 2006 discovery of two surviving Raiatean partulid lineages on the upper slopes of Mount Tefatua, the highest peak on the island. They have been identified using morphological and molecular phylogenetic analyses, the latter approach employing available museum and captive reference samples. One population, at 750 m elevation, consisted of Samoana attenuata. It has a multi-island distribution within the archipelago and surviving populations persist also on Tahiti and Moorea. A second population, present just below the summit at 950 m, consisted of a previously unstudied morphospecies and it has been formally described as Partula meyeri. It is unclear if a stable altitudinal refuge from E. rosea predation exists on Mount Tefatua but the unexpected discovery of these two surviving montane populations raises the possibility of preserving some fraction of Raiatea's endemic tree snail diversity in the wild.

The greatest single loss of Society Island tree snail diversity occurred on Raiatea, French Polynesia (Coote & Loève, Reference Coote and Loève2003), a member of the western Leeward Islands subgroup. Despite its relatively advanced age (2.5–3.2 MYA) within the archipelago, Raiatea has retained a high island profile (maximum altitude 1,017 m), and its size (171 km2) is second only to the much younger Tahiti. These geological characteristics may have promoted the evolution of Raiatea's exceptionally rich partulid tree snail fauna comprising 34 species, all but one being single-island endemics (Kondo, Reference Kondo1968). This endemic malacofauna represents c. 25% of partulid nominal species diversity, a remarkable fraction for one oceanic island considering that the family Partulidae ranges over 10,000 km of Oceania from Belau and the Marianas in the north-west to the Marquesas, Austral and Society Islands in the south-east (Cowie, Reference Cowie1992).

Following the deliberate introduction of the alien carnivorous snail Euglandina rosea on Raiatea in 1986 for misguided biological control purposes (of another alien mollusc, the giant African land snail Lissachatina fulica), native tree snail populations collapsed, prompting the emergency 1991 establishment of off-island captive populations for five (Partula dentifera, Partula faba, Partula hebe, Partula tristis and Partula turgida) of the 33 single-island endemic taxa, in addition to follow-up surveys of the island by the International Partulid Conservation Programme in 1992, 1994 and 2000 (Coote & Loève, Reference Coote and Loève2003). However, the Raiatean endemic P. turgida experienced sequential culture failure in captivity, culminating in its extinction in 1996 (Cunningham & Dasak, Reference Cunningham and Daszak1998). No living snails were encountered in the 2000 survey, leading to the conclusion that only the four surviving captive taxa remained extant (Coote & Loève, Reference Coote and Loève2003).

However, in early February 2006 a botanical and entomological field expedition to Raiatea led by J-YM encountered two relict populations of partulid land snails on Mount Tefatua (also called Mount Toomaru), the highest peak on the island. The two populations were morphologically distinct. One was located at c. 750 m in a ridge habitat, the other in a wet gulch at c. 950 m, directly below the summit in a pristine cloud-forest dominated by the native trees Metrosideros collina (Myrtaceae), Reynoldsia verrucosa (Araliaceae) and Streblus anthropophagorum (Moraceae). A voucher snail specimen was sampled from each population (Plate 1) and forwarded to the University of Michigan for identification based on morphological diagnostic characters of Raiatean partulids (Garrett, Reference Garrett1884; Pilsbry, Reference Pilsbry1909; Crampton & Cooke, Reference Crampton and Cooke1953; Crampton, Reference Crampton1956). In addition, a molecular phylogenetic approach was employed incorporating genotypes from a limited number of Raiatean lyophilized museum samples collected in 1970 by JBB, and also from the captive Raiatean populations maintained by the International Partulid Conservation Programme. Summary data are presented in Table 1 of the nominal taxonomic identity and sampling origins of the Raiatean snails genotyped for two markers: a 655 nucleotide fragment of the mitochondrial gene cytochrome oxidase I (mt COI) and a 796 (aligned) nucleotide fragment of the large nuclear ribosomal subunit gene (nr 28S). See Lee et al. (Reference Lee, Burch, Jung, Coote, Pearce-Kelly and Ó Foighil2007a,Reference Lee, Kim, Hong, Burch and Ó Foighilb) for details of the molecular and phylogenetic techniques used to generate and analyse the mt COI and nr 28S sequences, respectively.

Plate 1 In situ photographs (J.-Y. Meyer) of (a) Samoana attenuata from 750 m and (b) Partula meyeri at 950 m on Mount Tefatua. Note that the mottled mantles of both snails are visible through their semi-transparent shells.

The exemplar snail sampled from the population at 750 m was identified, on the basis of morphology, as Samoana attenuata and this identification was independently confirmed using both of our genetic markers. S. attenuata occurs on multiple islands within the archipelago (Garrett, Reference Garrett1884; Pilsbry, Reference Pilsbry1909; Kondo, Reference Kondo1968, Reference Kondo1973) and the Raiatean specimen had the same nr 28S genotype and a minor variant of the mt COI genotype as a reference Tahitian conspecific (Fig. 1). Although historical populations of S. attenuata have been severely affected by decades of predation by E. rosea throughout the archipelago (Coote & Loève, Reference Coote and Loève2003) this species has managed to maintain refugial populations on Raiatea, as well as on Tahiti and Moorea (Coote et al., Reference Coote, Loève, Meyer and Clarke1999; Coote, Reference Coote2007).

Fig. 1 Bayesian consensus phylograms for the mitochondrial cytochrome oxidase I (mt COI) and nuclear large subunit ribosomal DNA (nr 28S) datasets. All snails were typed for mt COI and a subsample (*) were additionally typed for nr 28S. Eua zebrina served as the designated outgroup (Wade et al., Reference Wade, Mordan and Clarke2001) for both analyses. Support levels are given for stem branches: posterior probabilities below the branch, and maximum parsimony (top) and maximum likelihood (middle) bootstrap support values above. Except for the Tahitian specimen of Samoana attenuata, all of the ingroup taxa are Raiatean partulids. They include snails collected in 1970 (Museum); captive zoo specimens, including the extinct Partula turgida (Captive) and the newly discovered remnant wild specimens of S. attenuata and P. meyeri (in bold).

The snail population located at 950 m is a more enigmatic case. Conchologically, it is distinct from all other described Raiatean partulids, including the now extinct P. turgida, with which it shares a thin and partially transparent shell more typically found in Samoana spp. (Pilsbry, Reference Pilsbry1909–1910). It represents a previously undescribed morphospecies of Partula and has been formally described as Partula meyeri (Burch, Reference Burch2007). A new species from an ostensibly extirpated fauna is not that surprising given the almost inaccessible location of Mount Tefatua, and it is unlikely that snails from this population were available for study by previous researchers.

Although only a partial sampling of historical Raiatean partulid diversity (consisting of museum samples collected by JBB in 1970 and captive samples, including preserved bodies of P. turgida) is available for comparative molecular analyses, our gene trees support the phylogenetic distinctiveness of P. meyeri. It nests within a clade of Raiatean congeners for both mt COI and nr 28S markers but is topologically distinct from all of them, including P. turgida (Fig. 1). The number of surviving P. meyeri on Mount Tefatua is difficult to estimate. Three adults were observed in the single gulch surveyed. There are numerous other such gulches on the mountain at that altitude but they remain unsurveyed because of the difficulty of accessing them safely.

Nominally extinct taxa occasionally persist in the wild, to be rediscovered at a later date (Whitten, Reference Whitten2006). However, in many such cases, this is tempered by the reality that, at best, the relevant species are nearly extinct (Shekelle et al., Reference Shekelle, Meier, Indrawan, Maryanto, Salim and Supriatna2007). Live E. rosea were recently observed up to c. 500 m on Mount Tefatua (J.-Y. Meyer, pers. obs.). Although this is not very different from the 458 m maximum altitude recorded during the 1992 Raiatean survey (Gerlach, Reference Gerlach1994), it is unclear at present if the Mount Tefatua remnant partulid populations are demographically stable, even in the short-term. December 2006 field data from Tahiti suggests a much higher (up to 1,420 m) maximum altitude for E. rosea (J.-Y. Meyer, pers. obs. on Mount Aorai) and the remnant Raiatean montane populations could easily be extinguished by just a few encroaching individuals.

There are, at present, no specific measures in place to protect these newly discovered remnant Raiatean tree snail populations. The Mount Tefatua summit area is officially deemed an area of high ecological interest but, because of its relative inaccessibility, it is not considered to be under immediate anthropogenic threat and has not been included in the 15 sites recommended for the highest level of conservation priority in French Polynesia. Our documentation of these remnant tree snail populations is significant in that they represent the only known extant partulids in the Leeward Islands. This status alone qualifies the Mount Tefatua survivors for proactive conservation measures, and their continuing vulnerability to E. rosea predation may prompt an official upgrading of the conservation status of their isolated montane habitat.

This work was made possible by Délégation à la Recherche support (to J-YM) and by National Science Foundation funding (DEB-0425984 award to DÓF and JBB). We thank the Direction de l'Environnement for a special permit (to J-YM) allowing collection of protected endemic species. Our thanks also to Regina Kawamoto (Bishop Museum), Adam Baldinger (Museum of Comparative Zoology) and Paul Calloman (Academy of Natural Science, Philadelphia) for forwarding us salient partulid type material.

Taehwan Lee and Diarmaid Ó Foighil use molecular phylogenies to study molluscan evolution and systematics. They have collaborated on diverse research projects involving marine, freshwater and terrestrial lineages. Jean-Yves Meyer is a plant ecologist and field botanist who specializes in the native and endemic flora of French Polynesia and the impact of invasive plants. He organizes and leads extensive multidisciplinary field surveys throughout French Polynesia. John B. Burch has almost 5 decades of experience as a malacologist and curator specializing in non-marine snail biodiversity. In 1970 he collected the Raiatean partulid museum samples genotyped in this study. Paul Pearce-Kelly is Curator of Invertebrates at the Zoological Society of London, UK, and heads the International Partulid Conservation Programme that oversees captive breeding of these highly threatened Pacific Island land snails. 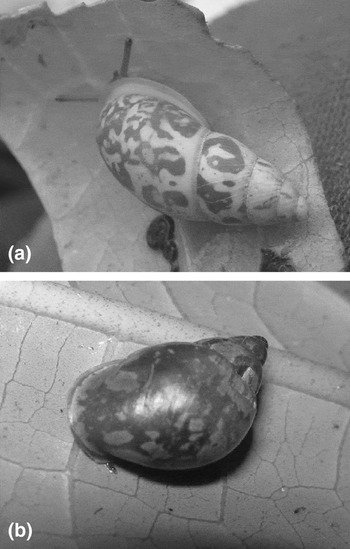 Plate 1 In situ photographs (J.-Y. Meyer) of (a) Samoana attenuata from 750 m and (b) Partula meyeri at 950 m on Mount Tefatua. Note that the mottled mantles of both snails are visible through their semi-transparent shells.

Fig. 1 Bayesian consensus phylograms for the mitochondrial cytochrome oxidase I (mt COI) and nuclear large subunit ribosomal DNA (nr 28S) datasets. All snails were typed for mt COI and a subsample (*) were additionally typed for nr 28S. Eua zebrina served as the designated outgroup (Wade et al., 2001) for both analyses. Support levels are given for stem branches: posterior probabilities below the branch, and maximum parsimony (top) and maximum likelihood (middle) bootstrap support values above. Except for the Tahitian specimen of Samoana attenuata, all of the ingroup taxa are Raiatean partulids. They include snails collected in 1970 (Museum); captive zoo specimens, including the extinct Partula turgida (Captive) and the newly discovered remnant wild specimens of S. attenuata and P. meyeri (in bold).