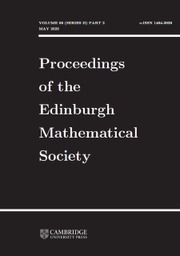 Proceedings of the Edinburgh Mathematical Society

The Barycentric Calculus of Möbius

August Ferdinand Möbius was born at Schulpforta, in Saxony, in the year 1790. He studied in the Universities of Leipsic and Göttingen, and, at the age of 2G, was appointed extraordinary Professor of Astronomy and Superintendent of the Observatory at Leipsic. There he remained till his death, in 1868, being appointed ordinary professor in 1844. Between the years 1817 and 1868 Möbius wrote his Barycentric Calculus, a Treatise on Statics, another on the Mechanics of the Heavens, and a large number of papers on Mathematical, Dynamical, and Astronomical questions. Most of these papers were contributed to Crelle's Journal, which was founded in 1826. The works of Mobius have recently been collected under the direction of the Royal Scientific Society of Leipsic, and under the editorship of Klein, Scheibner, and Baltzer.

The Barycentric Calculus of Möbius
×

The Barycentric Calculus of Möbius
×

The Barycentric Calculus of Möbius
×
×