This article develops a number of measures of the research productivity of political science departments using data collected from Google Scholar. Departments are ranked in terms of citations to articles published by faculty, citations to articles recently published by faculty, impact factors of journals in which faculty published, and number of top publications in which faculty published. Results are presented in aggregate terms and on a per-faculty basis.

To generate the measures of research productivity, I collected data from Google Scholar, which is a natural source of data for measuring research productivity: it is relatively comprehensive in indexing journal articles, books, and working manuscripts. Because it is free to use, it is relatively easy to query results for a large number of authors (as compared to commercial services such as Scopus and Web of Science).

I constructed four measures for each faculty member. First, I calculated the total number of citations. This can be viewed as a quality-adjusted measure of research productivity, in which quality is assessed by peer scholars. Second, I calculated the total number of citations to articles or books published during a recent 5-year period (i.e., between 2013 and 2017).Footnote 2 This allowed separate identification of recent research productivity. Third, I calculated the sum of the 5-year impact factors of the journals in which an author’s publications appeared. This is an alternative measure of quality-adjusted productivity that is arguably more directly under the control of individual faculty members.Footnote 3 Journal publications are blind to the identity of authors to a greater degree than citations. It is possible that individuals teaching at prestigious universities may have their articles or books cited simply because they teach at prestigious universities. A measure based on impact factors may be less sensitive to this.

The fourth measure was based on the number of top publications published by each faculty member. In political science, some journals are considered “top journals” and impact factors may not fully capture the degree to which they are viewed as particularly prestigious. There is no universal agreement about which journals are considered top journals. Scholars in American politics typically consider American Political Science Review (APSR), American Journal of Political Science, and Journal of Politics (JOP) as the top journals, with APSR considered to be particularly prestigious. Scholars in international relations and comparative politics may substitute International Organization or World Politics for JOP as a top journal. To make the measure as neutral to field as possible, my measure considered each of these five journals as top journals and double counted APSR publications.Footnote 4

Although I attempted to make the fourth measure as neutral as possible, it is arguably biased against departments with large political-theory groups; the results that follow should be interpreted accordingly. The measures based on impact factors and top publications arguably also are biased against any field or subfield in which books are considered especially important. A partial solution would be to generate a separate measure based on the presses in which books were published. Unfortunately, whereas Google Scholar reliably identifies the journal in which an article was published, it does not reliably identify the press that published a book. Therefore, I could not create a measure based on book presses unless I read the vitas of approximately 1,500 faculty members, many of which do not exist online.

To validate these measures, I compared my count of total citations for each faculty member to the count of citations in a faculty member’s Google Scholar page (for those who had one). In my preliminary checks, I found that these numbers were generally similar; however, four differences were apparent. Those individuals who had changed their name, had special punctuation in their name, had a very common name, and were prolific outside of the field of political science produced relatively large differences. In the first three cases, I identified individuals who met these criteria and manually checked and fixed the results when appropriate. In the fourth case, I did not correct the results because my goal was to measure productivity within political science. Therefore, the fact that a search that included the term “political science” missed some of these publications or citations was beneficial rather than problematic.

An interesting question is which departments have been increasing their research output. The results suggest that there is relatively little movement in the research output of scholars employed by particular departments over time.

I used the estimates for individual faculty members to generate scores for the 47 departments considered. I computed department scores by summing and averaging the measures for faculty members in each department. Table 1 reports the results based on totals. Table 2 reports the results on a per-faculty basis. Table 3 lists the top 20 scholars according to the four measures. Table 4 lists the top 20 most-cited publications. The following comments describe interesting patterns found in the data:

The most interesting differences in rankings appear when comparing citations to impact and top publications. Chicago, Cornell, Northwestern, UW, and Yale are ranked considerably higher based on citations. MSU, Stony Brook, Texas A&M, and WashU are ranked significantly higher based on impact and top publications. It is fairly easy to correlate these differences with characteristics of these departments—that is, departments with significant theory groups and significant numbers of qualitative scholars do better based on citation rankings. Departments with large numbers of Americanists and quantitative scholars do better based on impact and top publications. Determining which of these measures is the most appropriate inherently entails a value judgment and is not neutral to the expectations of the different fields of political science.

4. There is no obvious political-theory journal to add to the list of top journals. Therefore, beyond accounting for the fact that APSR is seen as particularly prestigious, double counting APSR has the effect of double counting the top journal that has been the most receptive to political theory. 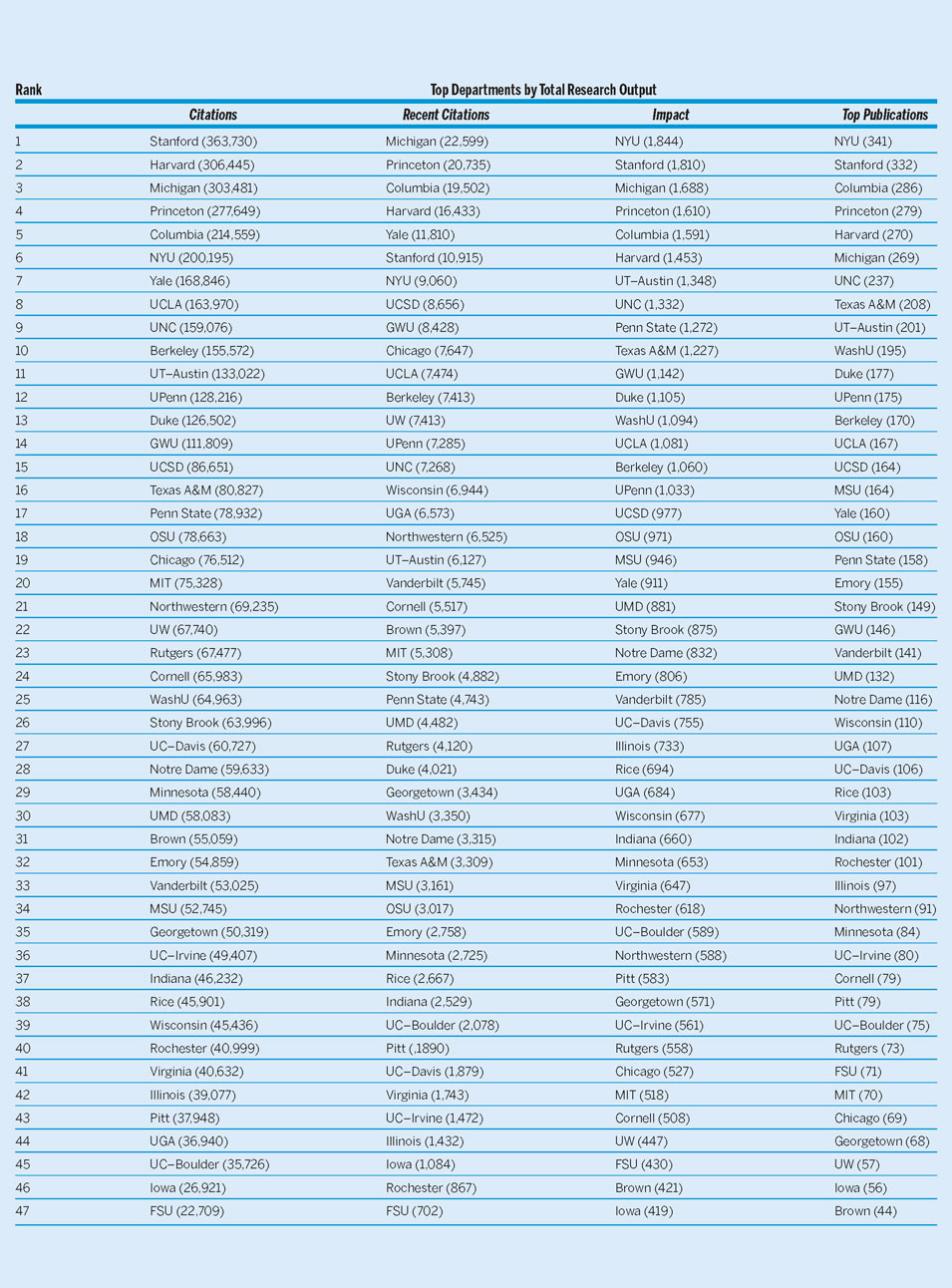 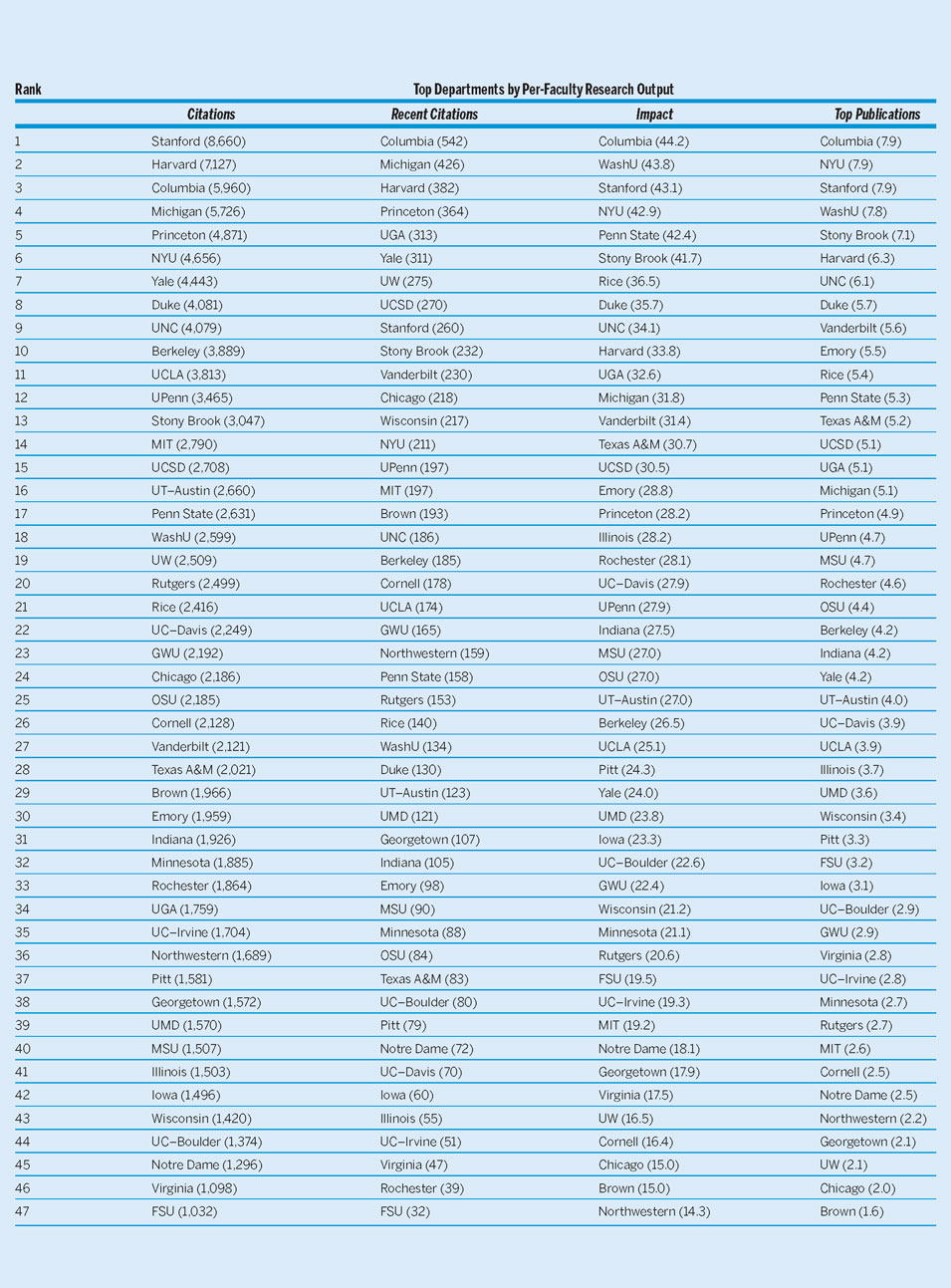 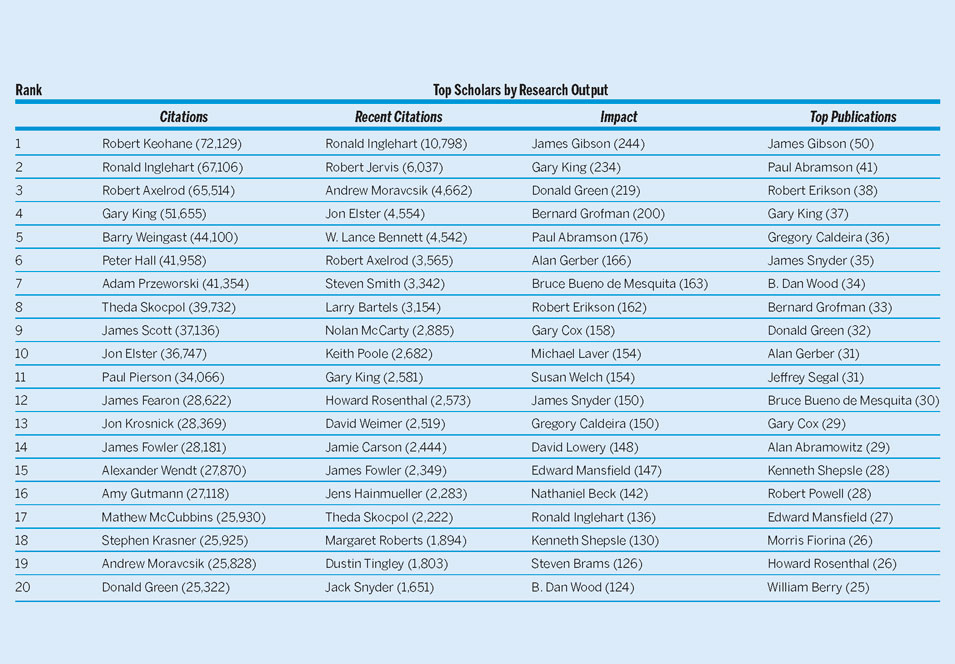 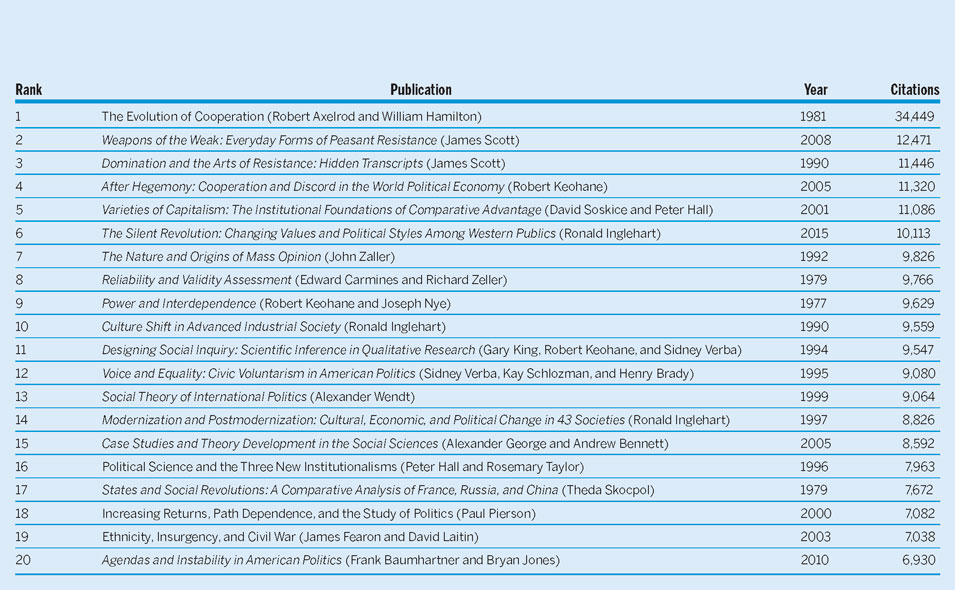