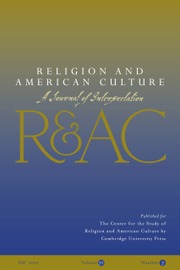 Over the course of the twentieth century, dozens of conservative Protestant ministers were accused of sexual deviance—including instances of same-sex acts and attractions. Protestant churches, in turn, experimented with employing various tactics to undermine and challenge such accusations. From silencing and secrecy to public censure and disassociation, denominational bodies labored to undermine evidence of queerness among their ministers. This essay surveys a one-hundred-year history of religious groups’ and institutions’ attempts at dealing with the uncomfortable but persistent allegations of not-quite-straightness among their leaders. This story accounts for how conservative Protestantism has been able to maintain its claims to a particular kind of sexual morality even as religious leaders themselves have repeatedly jeopardized this project.

3 Here, and throughout the essay, the word queer operates as a broad, capacious category that encompasses not-straight and same-sex attachments, desires, intimacies, inclinations, and sometimes even rumors. Queerness, in this sense, indicates a challenge to claims of straightness, rather than a coherent category in its own right. Positively asserting the sexual identities of the Christian ministers profiled here would make for an exercise that is both impossible and misguided for two reasons. First, categories of sexual identity and self-identification have changed profoundly over time—including over the course of the twentieth century. Second, none of the ministers whose stories are featured here would openly claim any label that did not conform to whatever form heterosexuality happened to assume in their respective historical periods. Still, because they were credibly rumored to have had encounters with people of the same gender, queer is used as an all-encompassing, fluid term that allows for a variety of interpretations of these encounters as well as a multiplicity of possible identities for their protagonists.

7 John Donald Gustav-Wrathall, Take the Young Stranger by the Hand: Same-Sex Relations and the YMCA (Chicago: University of Chicago, 1998).

8 For a brief survey of the changing ideas about sexuality in this era, see John D'Emilio and Estelle B. Freedman, Intimate Matters: A History of Sexuality in America, 3rd ed. (Chicago: University of Chicago Press, 2012), 222–28.

10 See a compilation of state-by-state sodomy statutes at midcentury in Donald Webster Cory, The Homosexual in America: A Subjective Approach (New York: Greenberg, 1951), Appendix B.

13 Heather R. White convincingly argues homosexuality was not a serious concern for Protestants before the 1940s. Indeed, White calls the scriptural condemnation of homosexuality “an invention of the twentieth century” and demonstrates how religious liberals in particular “un-muddled the confused category of ‘sodomical sin’ and assigned to it a singular same-sex meaning.” See White, Reforming Sodom, 3–4.

15 As Mark Jordan argues, “The most effective American rhetoric for condemning civil or religious toleration of homosexuality has repeatedly warned of dangers to the young.” See Mark D. Jordan, Recruiting Young Love: How Christians Talk about Homosexuality (Chicago: University of Chicago Press, 2011), xiii. This trend, as Jordan's work demonstrates, began in the early twentieth century and intensified from the 1970s on, as public religious figures like Anita Bryant explicitly linked homosexuality with child abuse and child recruitment. Few made this connection in the earlier decades of the twentieth century. The 2011 John Jay College of Criminal Justice report on the sexual abuse of minors by Catholic priests concluded that, despite speculations about a correlation between same-sex attraction, acts, and identities with the sexual abuse of minors, the data “do not support a finding that homosexual identity and/or pre-ordination same-sex behavior are significant risk factors for the sexual abuse of minors.” See Karen J. Terry et al., “The Causes and Context of Sexual Abuse of Minors by Catholic Priests in the United States, 1950–2010” (Washington, DC: United States Conference of Catholic Bishops, 2011), 64, https://www.usccb.org/sites/default/files/issues-and-action/child-and-youth-protection/upload/The-Causes-and-Context-of-Sexual-Abuse-of-Minors-by-Catholic-Priests-in-the-United-States-1950-2010.pdf.

25 John Loughery, The Other Side of Silence: Men's Lives and Gay Identities—A Twentieth-Century History (New York: Henry Holt and Co., 1998), 14.

26 Kathryn Lofton, “Queering Fundamentalism: John Balcom Shaw and the Sexuality of a Protestant Orthodoxy,” Journal of the History of Sexuality 17, no. 3 (September 2008): 439–68.

29 George Chauncey, “Christian Brotherhood or Sexual Perversion? Homosexual Identities and the Construction of Sexual Boundaries in the World War One Era,” Journal of Social History 19, no. 2 (1985): 200.

33 Quoted in Lawrence Murphy, Perverts by Official Order: The Campaign against Homosexuals by the United States Navy (New York: Routledge, 2014), 103.

34 Journal of the One Hundred and Twenty-Ninth Annual Session of the Rhode Island Episcopal Convention (Providence: The Providence Press, Snow and Farnham Company, 1919), 89.

53 Here, the “conservative” designation is important, as many in the mainstream and liberal Christian traditions began to develop more compassionate, therapeutic approaches to dealing with homosexuality in their congregations (if not quite yet among their pastors). As the work of Heather R. White and the many archival collections available through the LGBTQ Religious Archives Network shows, conservative denouncements of homosexuality were not the only kind of Christian response at the midcentury. See White, Reforming Sodom, 43–107; LGBTQ Religious Archives Network, https://lgbtqreligiousarchives.org/.

54 Edgar C. Bundy, Collectivism in the Churches: A Documented Account of the Political Activities of the Federal, National, and World Council of Churches (Wheaton: Church League of America, 1958).

64 For more on the FBI's much less gentle methods of dealing with Martin Luther King, see Lerone Martin, “Bureau Clergyman: How the FBI Colluded with an African American Televangelist to Destroy Dr. Martin Luther King, Jr.,” Religion and American Culture 28, no. 1 (2018): 1–51.

65 Historian R. Laurence Moore has argued that self-proclaimed religious outsiders have been a constant force in American history. “Those who play the role of outsiders,” Moore writes, “can wield enormous public influence that the alleged insiders are powerless to block. They can also determine in crucial ways the outlook and behavior of the insiders.” See R. Laurence Moore, Religious Outsiders and the Making of Americans (New York: Oxford University Press, 1986), xiii.

86 Emily Johnson, “A Theme Park, a Scandal, and the Faded Ruins of a Televangelism Empire,” Religion and Politics, October 28, 2014, https://religionandpolitics.org/2014/10/28/a-theme-park-a-scandal-and-the-faded-ruins-of-a-televangelism-empire/.