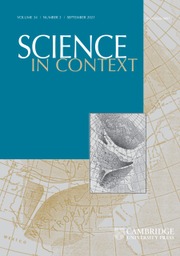 The celebrated “creation” of transfinite set theory by Georg Cantor has been studied in detail by historians of mathematics. However, it has generally been overlooked that his research program cannot be adequately explained as an outgrowth of the mainstream mathematics of his day. We review the main extra-mathematical motivations behind Cantor's very novel research, giving particular attention to a key contribution, the Grundlagen (Foundations of a general theory of sets) of 1883, where those motives are articulated in some detail. Evidence from other publications and correspondence is pulled out to provide clarification and a detailed interpretation of those ideas and their impact upon Cantor's research. Throughout the paper, a special effort is made to place Cantor's scientific undertakings within the context of developments in German science and philosophy at the time (philosophers such as Trendelenburg and Lotze, scientists like Weber, Riemann, Vogt, Haeckel), and to reflect on the German intellectual atmosphere during the nineteenth century.